Distance learning: 2021 BRIT Awards was a feelgood moment for the music industry 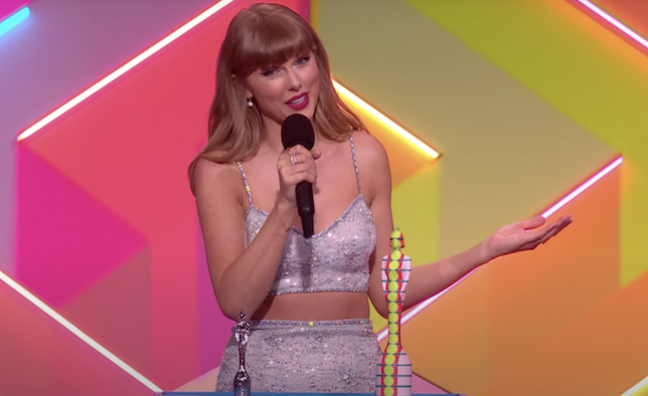 Even just a few weeks ago, expectations for this year’s belated BRITs celebrations were for a slick, largely pre-recorded event in line with many other awards ceremonies impacted by Covid.

In the event, the BRITs changed course after teaming up with the government’s Events Research Programme, which is researching the return of live performances. As well a being a televised ceremony, this year’s awards would be the first indoor performance without social distancing or masks, in front of an audience of 4,000 key workers (and some industry execs, naturally). The brightly coloured set also featured the first proper show at The O2 in London for over a year.

Suddenly, the music industry’s annual awards bash had become a staging post for the return of live music.

As BPI & BRITs boss Geoff Taylor said in his Music Week preview, music fans have been starved of full performances, so the BRITs had the potential to make an even bigger splash this year. Showrunners Rebecca Allen and Selina Webb (interviewed for our exclusive Music Week digital cover story) could have booked almost any Top 40 artist with a British passport for the ITV show, and we’d have cheered them on from our armchairs. Instead, the BRITs went big in 2021 with global British stars (Coldplay, Dua Lipa) international artists (Olivia Rodrigo, Taylor Swift, The Weeknd) and new talent (Arlo Parks, Griff, Headie One).

Pushed back from the usual February date, this year’s show was able to cast a wider net in terms of nominees and performers. The eligibility period ran from December 13, 2019 into the pandemic and up to March 11, 2021, so this year’s breakthrough stars Celeste and Arlo Parks each bagged three nominations for records that have only been out a few months. You can click here for all the winners.

The show was opened in style by Coldplay, who performed on a barge afloat on the Thames, accompanied by augmented reality style dancers. While the band may be seasoned veterans, they were playing a new single, Higher Power, set for a Top 10 entry this week – a fortuitous booking to get things going.

Chris Martin and his bandmates were warming up for the night’s big winner Dua Lipa, who was up next in what appeared to be a pre-recorded performance of Physical on the London Underground. But then the action switched to the arena and – with a telling ‘live’ time stamp on the screen – it was like witnessing an actual gig for the first time in 14 months. Of course, Dua Lipa is now global star and Grammy winner, but she made this BRITs medley feel like a special moment.

Arlo Parks was a refreshing choice for the BRITS – a lesser spotted independent artist on prime time ITV – and her performance surrounded by sunflowers should send her Top 3 debut Collapsed In Sunbeams back up the charts. Rising Star winner Griff’s rendition of Black Hole was another assured appearance by a new face for most viewers. And the importance of the category was underlined by the presence of last year’s winner Celeste - now a No.1 artist – to award the trophy.

International talent on the show included Olivia Rodrigo and her stark performance of Drivers License accompanied by a harpist, The Weeknd’s pre-recorded, soggy rendition of Save Your Tears and the always reliable Pink on video, who helped out Rag’N’Bone Man in the week of his second album’s release. A surprise on the night included a pre-recorded duet between Olly Alexander of Years & Years and Sir Elton John on Pet Shop Boys’ It’s A Sin, which EMI has released to raise money for the Elton John AIDS Foundation.

Despite the feelgood atmosphere with artists and presenters acknowledging the key workers in the audience, host Jack Whitehall was still allowed to be cutting when called for, such as the barbs aimed at lockdown infringers on a duet with sea shanty star Nathan Evans, “corporate wankers” in the boxes and his now familiar jokes about Spotify’s revenues (tech giant sponsors didn’t get the same treatment). Less funny quips about Zoom calls somehow slipped through the net.

With the BRITs partnering with the government on Covid research, there was always the risk that the show might pull its punches, as the event became part of a national effort. But Dua Lipa spoke up for health workers on the frontline by calling for a pay rise from PM Boris Johnson, and revealing that her second award would go to campaigner Dame Elizabeth Anionwu. This year each winner was able to gift a second trophy to a deserving recipient.

Dua Lipa also reminded the audience about her comments on the presence of women in music at the BRITs three years ago and the progress made since then.

“It’s really such an honour to be part of this wave of women in music,” said Dua Lipa as female artists won big during the evening.

While the victories for women at the BRITs were welcome (including an historic result for Little Mix), it was a year when UK rap was limited to a magisterial performance by drill star Headie One, featuring a besuited AJ Tracey on Ain’t It Different and Young T & Bugsey on  Princess Cuts. J Hus was unable to collect his award, though DJ Semtex spoke up for his unique abilities.

“He’s an incredible artist – one of the greatest,” said Semtex. “He makes music that makes our days that little bit easier.”

Taylor Swift, winner of the Global Icon Award, said: “I want to thank the BRITs and anyone who decided that I would be worthy of this incredible honour.”

Swift also had a message for the NHS workers: “Thank you for everything that you’ve done for us.”

Under challenging conditions, this year’s BRITs was clearly a success and a big moment for the music industry, so everyone involved deserves congratulations for pulling it off.

While there was an actual audience beyond the tables occupied by artists and their teams, the BRITs has always been designed to reach millions of potential fans at home. Execs hope for an an artist performance than makes an impact on TV as much as in the room, though even a quarter-capacity O2 arena surely helped each artist raise their game.

And if it can help secure the return of live, this year’s BRITs will go down in history.