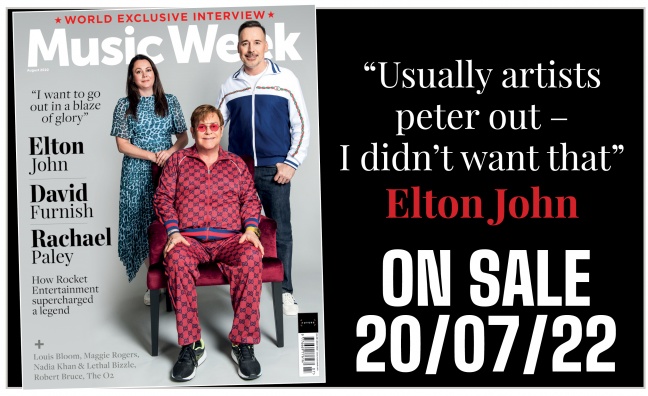 Music Week is thrilled to welcome Sir Elton John, David Furnish and Rachael Paley to the cover of our August issue.

In a world exclusive interview, we meet the legendary Rocket Man and his managers to find out how they drove a new golden era for Elton and his music and ask what comes next. Rocket Entertainment’s Furnish and Paley were crowned managers of the year at the 2022 Music Week Awards and our cover story begins with the moment they FaceTimed Elton to deliver the good news as soon as they got off stage.

From there, we delve deep into the five-year plan Furnish and Paley devised to supercharge Elton’s career, taking in the supremely successful Diamonds collection, various catalogue reissues, the Rocketman film, Elton’s autobiography Me and last year’s No.1 album The Lockdown Sessions.

Alongside revelations about the unique relationship he shares with Furnish and Paley and his take on his legacy, Elton talks Dua Lipa, new music, the UK charts, Brexit and more. Furnish opens up about his decision to manage his husband and its incredible impact, while he and Paley unpack the meticulous methodology that continues to drive huge success for Elton.

This month’s Music Week Interview sees us go face-to-face with Island Records UK president Louis Bloom. The executive talks about his longstanding love affair with the Universal-owned major and unveils his grand plan to write a new chapter in its iconic history. Talking breaking acts, genre, A&R, artist development and much more, Bloom offers candid insight into life at the top of one of the world’s most famous record labels.

Also in the features section, we head to The O2 to meet Emma Bownes and Christian D'Acuna for a celebration of the venue’s 15th anniversary. Reflecting on its position as the beating heart of the UK live sector, how they overcame Covid setbacks and its glittering history, the duo also celebrate its Music Week Awards win for the groundbreaking paperless ticketing system devised with AXS.

Fellow Music Week Award winner Robert Bruce delivers a state of the nation address for Black music and the future of UK radio. In a wide-ranging conversation, we speak to the presenter of Capital Xtra’s Homegrown Show about his industry journey, the art of the interview and what the industry must do to nurture the next generation of radio talent.

Finally in this month’s features section, we meet Nadia Khan and Lethal Bizzle. Inside, the manager, campaigner and winner of the Outstanding Achievement honour at the Women In Music Awards 2021 and grime pioneer share the highs and lows of their 18-year relationship. The duo have some powerful words for the industry as they continue their fight for a better business.

Our latest edition of Hitmakers features Victor Rådström and Mikael Rabus of Swedish collective Neiked, as the producers look back on the explosive success of their UK million-selling hit and streaming sensation Sexual (feat. Dyo).

The latest edition of Mentor Me – a collaboration between Music Week and Girls I Rate – stars Jacqueline Pelham-Leigh, whose work as a relationships manager, Black Music at PRS For Music has seen her advocate for creators from under-represented backgrounds.

Taking on The Aftershow this month is electronic music oracle Carl Cox, who looks back on a life in dance ahead of his upcoming album Electronic Generations.

In the Big Story, team N-Dubz talk about the trio's incredible return, including a sold-out UK arena run. Catch up with the comeback that caught the industry by surprise with insights from UTA agent Gary Howard, AEG Presents UK CEO Steve Homer and James Hill, head of A&R at Xploded Music.

Also in this issue, we check in with the health of the festival sector after the impact of Covid. With a busy 2022 line-up, we hear from the Association Of Independent Festivals, LIVE and Strawberries & Creem Festival.

Artist-fan platform Planet features in Start Me Up.

On The Radar this month is Wu-Lu, the South London artist seeking to inspire Britain’s youth with a heady mix of hip-hop and guitars. Signed to Warp, his debut album Loggerhead is out this month.

Incoming features Pale Waves, as Heather Baron-Gracie reveals how the Manchester foursome bared their soul and embraced pop-punk for their third album, Unwanted.

In this month's Rising Star we speak to Jade Johnston, marketing manager at Chess Club Records, while in Making Waves we get the lowdown on new PIAS signing Connie Constance, whose indie bangers blend humour with authenticity. In this month’s Sync Story, we hear how Katy Perry became the new face of Just Eat.

The new issue of Music Week is available from July 20.