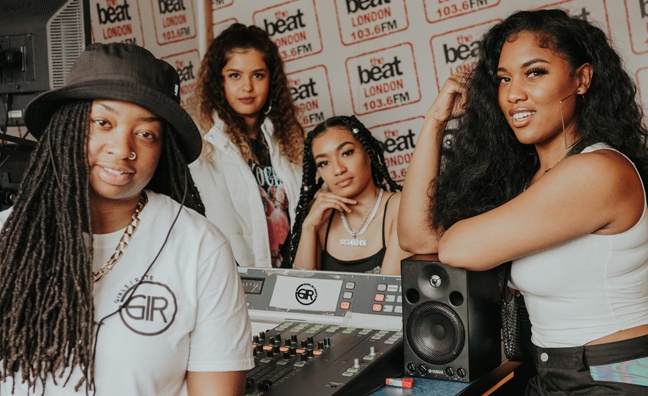 Girls I Rate, a movement focussed on equality for young women in music, has partnered with PRS For Music and PRS Foundation to launch the 2021 #GETHEARD Future Hitmaker Competition.

An official press release states that the #GETHEARD competition “will give aspiring women songwriters the opportunity to have their music broadcast and funded for the very first time.”

The competition and call for submissions was announced by Girls I Rate yesterday (April 5) on a brand-new weekly radio show on The Beat London 103.6FM.

The press release stated: “Women aged 16-30 are encouraged to submit their music via the Girls I Rate website for the opportunity to have their music heard by a panel of A&R experts, and #GETHEARD on the radio. Three songwriters will be chosen to receive a Future Hitmaker Award of up to £3,000, a six-week introductory course on Music Production and Sound Engineering at the Institute of Contemporary Music Performance (ICMP) worth £199, a one month membership to The Qube, and audio equipment from Girls I Rate radio show sponsor, Audio-Technica.”

Created in collaboration with Girls I Rate founder Carla-Marie Williams to champion aspiring songwriters and producers, the Future Hitmaker Award is powered by PRS Foundation’s Hitmaker Fund and supported by Spotify.

Shortlisted #GETHEARD submissions will feature on the Girls I Rate radio show on The Beat London 103.6FM every Monday until June 22, 7pm – 9pm, with shows available to listen back via Mixcloud.

All those who submit their music are also invited to attend a free masterclass on navigating the music business hosted by Claire Rose, outreach manager, PRS For Music, and Becci Scotcher, senior grants and programmes manager, PRS Foundation, who will share advice on how music creators can make money from their music and the various funding and grants available to them.

The press release continued: “Over the course of three months, a diverse panel of experts will critique the tracks submitted, with the freshest women voices and their music, in particular music of Black origin, to be showcased on Girls I Rate’s #GETHEARD weekly takeover on The Beat London 103.6FM. Featuring an all-female line-up of presenters, including resident Notting Hill Carnival DJ, Carmen London, international multi-genre DJ, S.Chinx, DJ Joy To The World and Jasmine De-Allie, the radio show will provide a platform for some of the songwriters, producers, artists, rappers and MCs submitting tracks to receive their first UK airplay.”

The #GETHEARD Future Hitmaker Competition will culminate in a live virtual event on Sunday June 27, where 10 shortlisted tracks will be played and listened to by some of the most influential A&Rs in the music industry: Since ’93 co-president, Riki Bleau, YouTube Artist Relations Manager, Sheniece Charway, Ivor Novello Award-winning songwriter and president of the PRS Members’ Council, Michelle Escoffery, BMG UK A&R director, Felix Howard, Spotify artist and label partnership Lead, Safiya Lambie-Knight and Downtown Music A&R manager, Davina Merchant. The group will provide their expert opinions, advice to those on the shortlist, and select the three recipients of the Future Hitmaker Award, who will receive £1,000, £2,000 and £3,000 respectively, towards career development.

Speaking about the launch, Girls I Rate founder – and co-curator of Music Week x Girls I Rate’s Mentor Me page – Carla Marie Williams said: “It’s all about the future generation, music is about staying fresh and coming up with new ideas, being able to work alongside PRS for Music, PRS Foundation and Spotify to give these opportunities to young women is everything! Ladies please #GETHEARD!”

To apply to the #GETHEARD Future Hitmaker Competition for the chance to have tracks listened to by the expert A&R panel, applicants must submit songs via this link by 31 May 2021.

Michelle Escoffery, president of the PRS Members’ Council, said: “I am honoured to be a part of this incredible initiative, created to provide opportunity and equity for women songwriters, composers and producers to #GETHEARD. We must encourage and empower the next generation of music creators and I look forward to supporting and championing these young women entering the industry alongside Girls I Rate and PRS Foundation.”

Joe Frankland, CEO of PRS Foundation, said: “We’re delighted to be partnering with Carla and Girls I Rate with this targeted award through our existing Hitmaker Fund, which supports behind the scenes songwriters and producers to get to the next step in their careers. The Girls I Rate Future Hitmaker Award is a fantastic opportunity to target support for talented women music creators with vital and timely grants to develop their careers and music making. Good luck to everyone who applies!”

PRS for Music and PRS Foundation have previously partnered with Girls I Rate on #GETHEARD to address the gender imbalance within PRS For Music’s membership, where men make up 81.7% of the total figure, and to give undiscovered women songwriters a gateway into the industry.

Ivor Etienne, CEO, The Beat London 103.6FM, said: “We are honoured to be able to give Girls I Rate a platform through The Beat London 103.6FM to help women #GETHEARD - Our station has on average 15k listeners a week. We look forward to hearing all the new music being created and promoted on our radio station throughout the UK and beyond.”

Safiya Lambie-Knight, lead, artist and label partnerships (genre specialist), added: "I am honoured to be part of Get Heard this year and look forward to hearing from the next generation of up and coming female talent in the UK.”