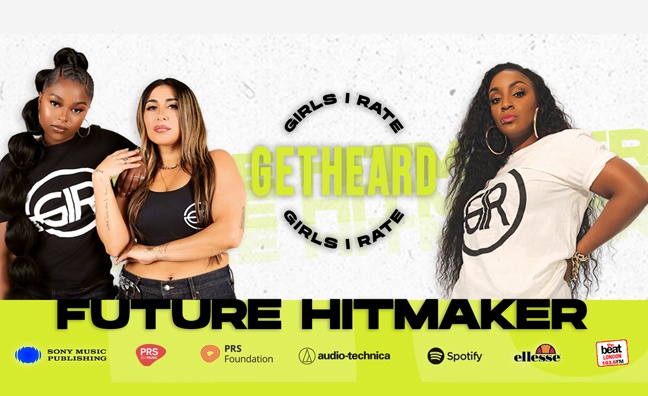 Girls I Rate – a movement focussed on equality, diversity and opportunities for young women in the creative industries – has kick-started its 2022 #GETHEARD Future Hitmaker competition. Among its new partners for this year are Sony Music Publishing.

First launched in 2017 by GIR founder Carla Marie Williams, with subsequent support from PRS For Music, PRS Foundation and Spotify, the #GETHEARD competition was conceived to “give aspiring women songwriters the opportunity to have their music broadcast and funded”.

Applications are now open for women aged 16-30 to submit their tracks via Girls I Rate by November 21, 2022.

Contestants will have the opportunity to have their music heard and be given feedback by a panel of A&R experts. To encourage submissions across the UK, GIR has also partnered for the first time with BBC Music Introducing. Beginning this month, GIR will host takeovers across BBC Music Introducing’s network of shows, with the freshest shortlisted GETHEARD undiscovered and under-the-radar entries broadcast to BBC’s audiences.

Three songwriters (or producers) will receive a Future Hitmaker Award of up to £3000, Pirate.com studio time to hone their craft, audio equipment from Audio-Technica and apparel from Ellesse.

Speaking about the initiative, Carla Marie Williams said: “Over the six years of running GIR, my team and I have discovered and championed so many gems prior to their public-facing success. Tiana Major, Shae Universe, Rachel Chinouriri, Amaria B – we’ve worked with them all, and I personally take pride in leading our A&R team and discovering Future Hitmakers.”

On their decision to join forces with GIR, David Ventura (president and co-MD) and Tim Major (co-MD), at Sony Music Publishing, said: “Girls I Rate’s commitment to championing equality and diversity in the music industry is vital and GETHEARD will no doubt act as a brilliant platform for the next generation of womxn creators, songwriters and producers. We're excited to partner with GIR, offer the support of our team, and we cannot wait to watch it flourish over the coming months.”

Over the six years of running GIR, my team and I have discovered and championed so many gems prior to their public-facing success

The GETHEARD Future Hitmaker competition will culminate in a grand finale, in-person, event on Sunday December 4, hosted by KISS DJ Ellie Prohan and MOBO Award winner Nadia Rose at a venue to be announced at a later date with a special guest announcement.

Ellie Prohan, DJ and presenter, said: “My mission is to work with people who understand the hours it takes to be a singer, songwriter, lyricist, producer – which is why I find Girls I Rate such an important platform. I want to support and encourage women, LGBTQIA+, non-binary and all intersectional talent in every area of my work as much as possible. It's an honour to contribute to the journey of the next big talent to come through and important for people to get seen and GETHEARD in a community space that really values supporting the journey."

The 10 shortlisted tracks will be played and listened to by some of the most influential A&Rs in the music industry: Jessie Bull (Atlantic Records), Shauni Caballero (Sony Music Publishing), Jodeci Chin (Vevo), Lloyd Murray (Warner Records) and Jacqueline Pelham-Leigh (PRS For Music).

The judges will be on hand to provide their expert opinions, offer invaluable advice to those on the shortlist, and select the three recipients of the Future Hitmaker Award to receive £1,000, £2,000 and £3,000 respectively, towards career development.

We're excited to partner with GIR, offer the support of our team, and we cannot wait to watch it flourish over the coming months

Last year's award recipient, British-Ghanaian rapper ShaSimone, who went on to feature on Mercury Prize-winning rapper Dave’s album, We’re All Alone in This Together, said: “It’s so crazy to me looking back as we initially applied on a whim as I saw the GETHEARD post in passing on my Instagram last year. Never in a million years did I expect the outcome, but I was just so excited to showcase my music and wanted everyone to hear my song so winning it was a huge surprise to me, so happy I took part. It was literally like a domino effect for me after then as I was able to achieve so many amazing things in my career after the competition and funny enough the funds won is what I used for my first single for my now released project SIMMA DOWN. I would encourage all female artists to always find ways to put yourself out there because you just never know the blessing that can come from it. Super grateful to the GIR team as they’ve been super supportive since the beginning of my journey and it’s great to know such platforms exist for women, trust me the industry ain’t ready for us, we’re coming!”

PRS For Music have worked with GETHEARD for six years since its launch and is one of a series of collaborations supported by PRS For Music to empower future talent entering the music industry.

Jacqueline Pelham-Leigh, relationship manager – Black Music, PRS For Music, said: “Opening doors for creators and focusing on empowerment, ownership and longevity is extremely important to me. Whether through creating opportunities, breaking down barriers, improving education, or mentoring, GETHEARD helps tomorrow’s songwriters and producers who are entering the industry have visible role models to aspire to, and a community that supports them along the way”.

Joe Frankland, CEO of PRS Foundation, said: “We’re incredibly proud to continue our partnership with GIRLS I RATE and our Hitmaker fund for this important opportunity supporting emerging women music creators. We were impressed with the huge number of excellent applications for last year’s GETHEARD Future Hitmaker Competition and the very talented winners and look forward to seeing the entrants for this year’s competition.”

Jennie Bianco, UK head of marketing for Ellesse, concluded: “We are thrilled to be partnering with GIRLS I RATE this year and being a part of this empowering program for emerging female creators in the music industry. For decades fashion and music have walked hand in hand with each other and we are proud to be working with such exciting rising talent.”