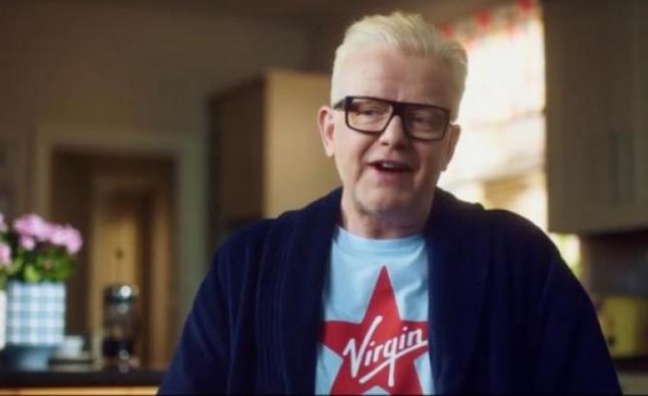 While Evans is a seasoned early morning presenter and had the biggest RAJAR audience for any radio show on Radio 2 (around 9 million), he’s moving into new territory for his show on digital-only station Virgin Radio. But the network has described it as his “spiritual home” as he famously presented on its previous incarnation (now rebranded and under new ownership as Absolute).

Speaking just ahead of the January 21 launch, Mike Cass, Virgin Radio content controller, said: “His last [Radio 2] show was Christmas Eve, he’s had a great break, he’s relaxed, he’s ready to come back. The line about Virgin being his spiritual home when he was talking about leaving Radio 2 in the first place – that kind of passion is still very much with him. We are incredibly excited.”

While the move from Radio 2 to Virgin Radio received extensive coverage, Virgin Radio is taking no chances and has rolled out an extensive promotion campaign including TV advertising.

“Chris is the No.1 talent in the UK,” he said. “On Radio 2, he had the biggest radio audience not just in the UK but also in Europe. To achieve that kind of audience, it has to be a show that appeals across the generations. If anyone has seen the TV advert, they will know that Chris’ family is part of the gang.

Chris is the No.1 talent in the UK... it has to be a show that appeals across the generations

“Those people who have listened to him on Radio 2 will know that family, and family values, are really important to his identity and he brings that to the show. When you hear the show, what you will hear is a man who is absolutely able to connect with generations upon generations, from pre-teens to people who are retired. He has this incredible gift as a communicator to be relatable and to be able to communicate to everybody.”

Despite the big move, Cass said Chris Evans on Virgin would not be radically different to Radio 2 show.

“You will have seen on social media, there’s a lot of people who are excited about Chris starting, they can’t wait for him to get back on air,” he said. “Those listeners are also going to be expecting the familiarity of the furniture they have been previously used to hearing. To just make change for change’s sake was something we were keen to make sure we didn’t do. That being said, we’ve looked at everything and made sure it’s there for a reason.”

Features on the show including the Gobsmacker (Virgin Radio terminology for a big tune) and the Big Screen Belter (a song from a movie soundtrack).

“They allow Chris not only to be the great entertainer that he is but also for us to embrace music as an absolutely core part of Virgin Radio’s DNA,” said Currie.

Evans will replicate his Radio 2 Friday show by having special guests at the end of the week. Virgin Radio is launching with what it describes as a week of Friday shows, including Richard Ashcroft for the launch. Other confirmed music guests include KT Tunstall, Texas and Paul Heaton & Jacqui Abbott.

The show will also be free of advert breaks thanks to a deal with Sky.

“Having an ad-break free mentality allows to create a deeper relationship, produce that richer full show, and allows it to flow naturally,” said Cass.

Asked about the competition from Radio 2, Cass was diplomatic.

“Zoe Ball is a class act and I think she’s a great broadcaster,” he said. “One or two of the judgements have been a bit harsh and I hope they are not as harsh with us on day one.”

The Evans show also coincides with a brand extension and the launch of two new stations - Virgin Radio Anthems and Virgin Radio Chilled.

“We have just moved into new studios as well, it’s been a pretty manic few weeks,” said Cass. “We’re now in purpose-built studios in the News UK building. We’re the first of the radio stations to move in here. So we’ve built studios, done a station move, launched two new radio stations and there’s Chris as well. It’s been a fun few days.”