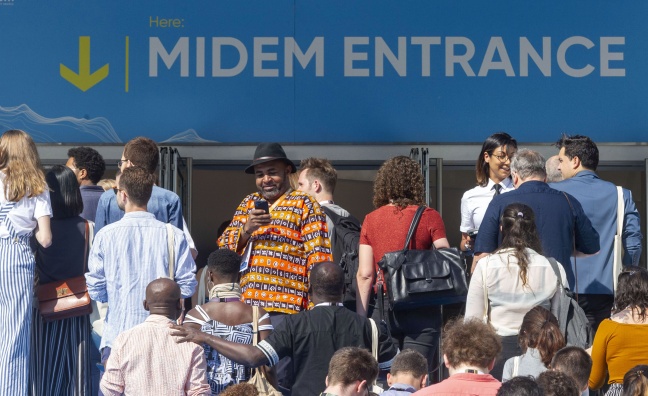 Neil Portnow’s keynote was the main talking point as the MIDEM conference came to a close in Cannes, France after a successful week in the sun.

The outgoing president of the Recording Academy gave a wide-ranging address, in conversation with Music Week editor Mark Sutherland, as Portnow addressed the shifting sands of the music business during his 17-year tenure, and talked about his own, impending exit.

Portnow referred to his stint at the Academy as “the greatest experience I’ve ever had” and “a very unexpected run and a great run”. While at the helm, he helped secure the passing of the Music Modernisation Act, and had a front row seat as the business negotiated the long years of decline before the recent, streaming-powered boom.

“I never felt the business of music would fade away,” he said. “We did see the models of sales and distribution change. But music’s never going away. If anything, it’s more ubiquitous and more important to the human condition. Music influences babies in the womb, it changes people’s lives. Music is so critical. Imagine a world without it? I never thought that was possible. It was just about retooling the business in a fashion that could sustain and support the creativity. And fortunately, we’ve found a way to do that.”

The Grammys has also been retooled under his tenure as the Academy tried to keep up with the changing musical and TV landscape, which Portnow said had made staging the event ever more “challenging”.

Several artists have criticised the awards in recent years, including Ariana Grande, who pulled out of last year’s ceremony in a row about her performance. And Portnow acknowledged that the balance of power had shifted towards artists.

“I certainly think there’s been a shift in terms of authority, particularly with artists who are more established,” he said. “In many ways it’s a great thing because what you really want is an artist who has a vision of where they want to be, what they want to do, how they want to present themselves, what their music and image is like and what their career path is like. What goes with that territory is a lot of control from the artist themselves. In many ways that’s very healthy, in many ways that’s very challenging as well.”

Portnow will be succeeded by Deborah Dugan at the end of July, a symbolic moment for some, after Portnow was heavily criticised for suggesting female artists needed to “step up” in the wake of the 2018 Grammy Awards, which saw a lack of female winners or performers on stage. Portnow said he regretted those words.

“Knowing my own commitment and experience in terms of diversity and inclusion and fairness, it was very frustrating to be in the centre of that storm, about something that I know I’m a good actor and caring person about,” he said. “That being said, once you get past the personal part of that, you have to think a little more broadly. And what I started to think about was, ‘OK, this puts a spotlight on an issue’. Is it potentially a teaching moment, not only for me but for others? Can we take this moment and use it as a platform to [address] a problem that we have in our industry that’s quite significant? And that’s exactly where I came out, I said, ‘Yes, we can do that’ – and that’s what we’ve done.”

In the wake of the controversy, the Academy set up a taskforce to identify and remove “explicit barriers and unconscious biases that impede female advancement in the music community”. Portnow said “a number of changes” had been made in the light of the taskforce’s findings.

Many have linked Portnow’s decision to step down with the row, but the Academy president said he had actually made up his mind to go before the Grammys incident.

“There are some in the media who have really wanted to conflate my decision to step down from this position after 17 years with what happened last year,” he said. “The fact is there’s no relationship whatsoever.

“Seventeen years is quite a run. I witnessed the transition of the two previous CEOs and they were both very rocky to say the least. I thought to myself, ‘When the time is appropriate for a transition on my watch, it’ll be for sure a smooth, orderly transition. When I looked at the future maybe two years ago, the contract I had was going to expire on July 31 this year. And I thought, ‘That’s a natural place to make that change’.”

Portnow said he expected Dugan to take the Academy “to the next level”. As for his own plans…

“I’m definitely getting my High School band, The Savages, back together,” he quipped. “We’ve had rehearsals, we’re ready. I’ve been asked if we’re available on January 26 to open the Grammys but unfortunately we have another booking that day!”

In fact, the former label executive (Arista, Jive, RCA, EMI) will wait until the handover to Dugan is complete before taking a holiday and making his next move.

“You spend your life in the business, you know people, you know lots of things that are happening,” he said. “The bottom line for me will be finding good things to do with good people that I like.”