'It's a perfect mix between a spectacle and a classy performance': Team SuRie on her Eurovision masterplan 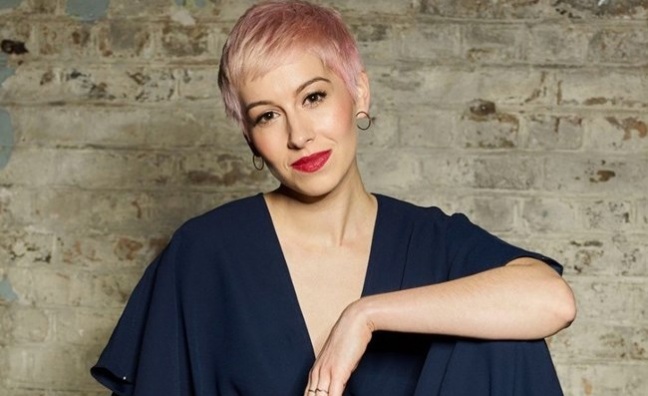 Eurovision returns on Saturday (May 12) and British hopes rest on SuRie, a classically trained musician who’s representing the UK with a song called Storm. Written by a team of songwriters at Tileyard, the dance-pop banger has raised expectations of a decent result in Lisbon. According to the OCC, the track has sales to date of 4,331, including 163,216 audio streams.

What stage is SuRie at in her career – what success has she had prior to Eurovision?

It might sound like a cliché, but I really think it's fair to say that SuRie doesn't measure her success in terms of how many arenas she's filled (none) or how many millions of albums she's sold (a couple of thousand). She is incredibly proud of her debut album, Something Beginning With..., but any glowing review is instantly forgotten when she gets a message from a fan going through a bit of a rough patch, telling her that her music has brought some solace. Getting a "cool!" from Idris Elba in his London studio, where she did some top lines for a demo, means as much as seeing 30 people in a pub in Cambridge being mesmerised by her music and her performance. I see and hear exactly the same SuRie in that pub as I see her now on that huge stage of Eurovision. The scale is different, but the artist is the same. It's her brand, it creates an immediate connection, and her following, though relatively small, is fiercely loyal because of it.

You’ve already lined up a post-Eurovision UK tour - has she made inroads as a live performer?

We're getting there. Venues are more and more willing to take a punt on putting SuRie on their stage, in spite of her being relatively unknown. There is a sense that she is "one to watch", and once you've seen her live, you're guaranteed to want more. She was born to perform, and she is unstoppable in her passion for live performance. We have set up this small tour on our own, and we're so grateful to the venues for sharing the risk, but we are of course hoping that a live agent will pick up from where our modest resources will stop us from going any further.

Can you explain the MMP label set-up?

Blissfully naive. There are no deals, and there are no budgets. The lack of a record deal with any major or larger independent label does create headaches regarding promotion and physical distribution, but that is so easily offset by an unlimited level of freedom. SuRie can write what she wants, when she wants, work and record with the musicians and producers she chooses, and keep complete control over, and ownership of her creative output. Having said that, we are definitely in the market for a publishing deal. It would allow for SuRie's music to tap into a much broader creative field, which is something that fits with her profile as a musician. Her music has already been used for theatrical projects, but we want to go further. Stage, television, film...

How has SuRie benefited from the Eurovision process so far?

Eurovision has of course opened a door to the kind of exposure most unsigned performers and writers can only dream of. I think it's clear that she has shown herself to be an extraordinary ambassador for the UK as an artist. Her performances, the way she interacts with her audience on stage as well as through social media, and through the media in general, has made people sit up and pay attention, and is universally appreciated. She is a both-feet-on-the-ground, 100% truthful person and artist, and I feel that more and more people, in the UK as well as abroad, have come to love her for that.

Why did you want to represent the UK in Eurovision – what are the opportunities for an artist’s career?

SuRie had been partnering up for months with producers across Europe, to write several songs as potential submissions for Eurovision, for different countries and different artists, months before there was even talk about her as a potential performer. When one of the songs (Storm) selected for the BBC's Eurovision: You Decide was presented to her as a performer, she didn't have to think about it. Having been part of Eurovision twice before as a backing vocalist for Belgium [2015 contestant Loïc Nottet and 2017 entrant Blanche] and having loved every second of it both times, it was a no-brainer for her to grab the opportunity with both hands.

There's more buzz than usual for the British entry - what are your hopes for Eurovision?

Very hard to tell. Stats, odds, feedback... they all tell different stories. On top of that, we're really inside the bubble and the echo-chamber right now, so we don't really know if the buzz is normal or more than usual. SuRie's performance swayed the Brighton audience for You Decide, from least favourite to winner, and her fans are well aware of that. Being one of them, I have no doubt she can and will repeat that with her performance in Lisbon. The rest is out of our hands.

Who do you think are your main rivals?

SuRie refuses to speak or think in terms of rivals, and I wholeheartedly agree. The generosity and friendship between the different acts and delegations is something truly special to see, and to narrow that down to rivals, to winners and losers – it goes against everything the Eurovision Song Contest is about. I realise it says "Contest" in the title, and I don't want to take away from the sentiments and the excitement that come with that word, but when you see how much fun they have together, how sad they are when fellow delegations are wiped out in the semi-finals, and how genuinely supportive they are of each other backstage, you just know that it is about so much more than rivalry.

What can you say about the performance?

It's a perfect mix between a spectacle and a classy performance. The creative team and the BBC deserve only the highest praise for what they have achieved together with SuRie.

What would winning mean to her career?

I imagine it would be a career-maker in one sense, but at the same time nothing would change for her as an artist, meaning that she would just keep doing the things she has been doing for the last 15 years in exactly the same way. It would of course open doors internationally, it would create opportunities to perform and connect with people across Europe, to work with fellow writers, performers and producers who would otherwise not have known about her. And that would, of course, be amazing.

And how would a Top 5 finish help her career?

I think it would mean the same as winning, but maybe more so in the UK than abroad. I think a Top 5 for the UK would earn SuRie a lot of respect and love from the UK audience, and that in turn would again lead to more live performances, to more writing and recording partnerships, and to more opportunities to put her music out there. And that's the main thing, the absolute priority.

Eurovision's Grand Final is broadcast on BBC One on Saturday, May 12 from 8pm.