'It was a euphoric moment when Simon Mayo joined us': Bauer Media set for Scala launch 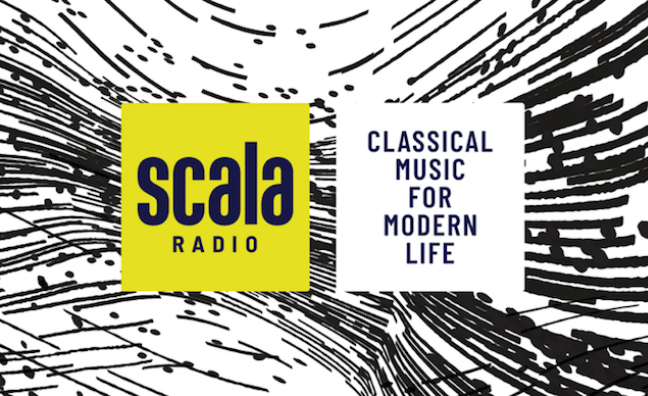 The UK gets a new classical station from today (March 4) – Scala Radio is the first new major network in that field in more than 25 years.

Simon Mayo will be the first voice on air with his 10am-1pm show, including the return of his Confessions feature.

Are big names important for a new station like Scala?

“Absolutely. When we came out with the concept of Scala, it was to try and create a classical music station with an entertainment approach. So the quality of the people between the music was going to be so important. It was a kind of euphoric moment for the station when Simon [Mayo] decided to join us. He’s such an incredible broadcaster, with so much experience and with a passion for classical music as well, so that put us in a really good position. In terms of bringing people like Mark Kermode on board and Angelica Bell, Goldie, William Orbit and Alexis Ffrench, there is real quality in the broadcasters we’ve got on board.

“Interestingly, there are some new broadcasters as well: Faye Treacy, who’s a classical musician and a stand-up comedian; Luci Holland, who is a games composer; and Jack Pepper, who’s a young 19-year-old guy who's already composed some music but talks about classical music in a very relatable way. These presenters are actually starting their journey in broadcasting, so it’s a real rich mixture of expertise and passion in the line-up.”

How did you secure on-air talent such as Simon Mayo?

“We realise that it’s a huge leap of faith right at the beginning for a lot of people in joining us. But the concept of what the station was about in terms of the market that we could appeal to, the potential audience there and how we could engage with listeners on classical music was a big selling point. It was a big step for Simon to come and join us, but we’ve been friends for a long time and obviously keep in contact and just have conversations about radio in general. That became an opportunity to talk to him about something different, which he really liked.”

How does Scala fit with Bauer Media’s current strategy?

“We’ve made some recent acquisitions with stations around the country. Jazz FM came up and it was a great station, so it was kind of better for us to buy that than try and start that from scratch. When the concept for Scala was formulating, we felt we’d actually probably be in a better position to start that from scratch rather than look to buy something. In the last 25 years, the classical market has actually only ever been two stations, Radio 3 and Classic FM."

Will Scala and Jazz FM be quite complementary in the Bauer Media family?

“Absolutely, even in terms of where we are in the building, Scala and Jazz are sitting alongside each other. You could call them specialist stations but [Jazz FM] has got pretty significant numbers. We feel that classical music is permeating into everybody’s lives through the live experience side and the availability of classical music on streaming platforms. We were talking the other day about the PlayStation live event, which sold out really quickly at the Royal Albert Hall with quite a young audience.”

Classical music is permeating into everybody’s lives through streaming platforms

“There are things that you would expect to hear on a classical music station, whether that be Beethoven, Brahms, Bach, and we think that people do need to hear those things. Then there’s the other filter, which is trying to take people on a pleasantly surprising journey with some classical music. That could be anything from Alexis Ffrench or even the Thom Yorke Suspiria soundtrack, which is beautifully arranged with some wonderful choral pieces on it. [Scala will play] the right kind of music from Hamilton, music from Final Fantasy or other video games, and certainly film soundtracks will be a big part of it, as well as classical versions of popular songs. One of the songs we’ve got running on a test transmission is a Bohemian Rhapsody cover and it’s getting an amazing reaction. So we’re trying to make this station as open as possible to everyone.”

Who do you think the audience will be for Scala?

“There are probably three kinds of different sorts of audience really. There will be classical music fans that are really knowledgeable, very passionate and it’s a real part of their life. Then there will be the people who listen to classical music but they may look at the whole concept as a bit stuffy; they do like it so they’re streaming stuff but they maybe want some more curation and entertainment around it. Then there are the sort of classical dabblers, as we’re calling them, which is people that are getting immersed in classical music. That could be through Secret Cinema, or it could be from going to see Pete Tong and the Ibiza Classics, it could be going to the Royal Albert Hall to see Raiders Of The Lost Ark with an orchestra. So there are people that are getting into classical music, they don’t label themselves as classical fans but they enjoy classical music - so we see that as a potential audience as well.”

Are smart speakers are a good way to reach this audience?

“Yeah, completely. I think we’re at the tip of an iceberg with how people listen via the smart speakers. We can already see on other stations at Bauer the influence of smart speakers on listening for our audiences.”

Your main rival also has an FM platform. Does it matter that Scala is digital-only?

“No, I think we’re on the platforms that we’re on and we’re proud of that. Bauer as a business is outperforming the market with their stations on digital listening anyway. We’re national DAB on stereo across the country, on the app, online and on smart speakers. They are the kind of places that we would expect our listeners to find us. With the Scala strapline being classical music for modern life, a lot of those platforms are related to modern life and we can see that the potential is there with those platforms.”

How will you judge success in a year’s time?

“It’s really about establishing the tone to listeners. We would then maybe start to look and see what events we could do, what partnerships we can have, and how we can get the station out to as many people as possible. So not only are they listening to the station, they’re also immersed in it in other ways. Working with artists as well and getting some great insight in terms of programming. Alexa has started that really well for us and I think we’re looking to have more curated series as well. With people like Goldie and William Orbit, we’ll look at how we can work closely with those guys to say [to listeners] that the world of classical music is really broad.”

Pick up the new issue of Music Week for interviews with Simon Mayo and Ric Blaxill.