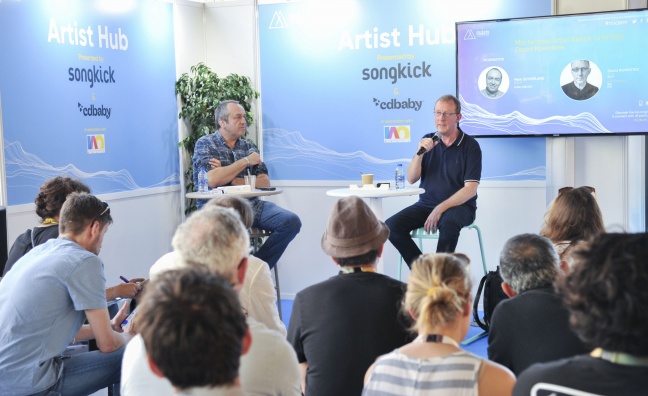 Next year, British execs visiting MIDEM may have to join the ‘Non-EU Passports’ lane at Nice Airport. But this year, they were making the most of their last few months as European citizens to dominate the day’s agenda.

The day began in blazing sunshine but, in very British fashion, the UK biz bypassed the beach to sit in a darkened room and discuss Brexit.

The ‘Never mind the B word’ panel, hosted by Music Week’s own Emmanuel Legrand, saw a heavyweight panel of British execs contemplate the future of the biz outside of the EU.

And, despite the looming spectre of Brexit, most were optimistic that the UK will maintain its position as a key talent centre.

“Music’s place in the attention economy has never been stronger,” said AIM CEO Paul Pacifico. “And UK repertoire isn’t reliant on the grand old days of the ‘60s.”

“We’re really lucky we have the BBC,” she said. “Their remit is to cover a really broad range of music. That’s given us opportunities that you don’t have in the US.”

But PPL CEO Peter Leathem and BPI director of public affairs Ian Moss did warn that trade deals struck outside the EU umbrella could threaten the UK’s copyright framework.

“I’d be very concerned about a US trade deal that imported their copyright regime,” said Moss. “We wouldn’t want to pass up our copyright rules to preserve our agriculture or whatever else.”

“You’ve got to put forward your case,” agreed Leathem, noting the 2011 Hargreaves Review Of Intellectual Property & Growth might have ended up very differently if the UK hadn’t been in the EU at the time. “There are powerful interests trying to chip away at copyright.”

Ultimately though, most were confident that Brexit would not have any serious damaging effects.

Blur’s Dave Rowntree has been there and done that, of course, although not sold the T-shirt as it turns out.

In conversation with Music Week editor Mark Sutherland, Rowntree (pictured) talked through his career, from his early bagpipe lessons to Blur’s disastrous 1992 US tour, only undertaken to pay off a merch deal signed after they found themselves £200,000 in debt (“We were barely known in the UK, I have no idea why they thought anyone would buy a Blur T-shirt”).

Later, of course, Blur became the biggest band in the UK, but Rowntree warned the crowd of aspiring artists that fame and fortune wasn’t all it was cracked up to be.

“I thought that there was something fundamental missing from my life, I wasn’t complete as a person,” he said. “I thought if only I could be famous that would be the missing piece of the jigsaw, external validation would be the thing that made it all worthwhile. Roll the clock forward a number of years and I did become famous, but it became clear what a load of crap that was!”

The 1994 Parklife album brought a new generation of teenage fans, which left another member of the band disillusioned..

“That drove Graham [Coxon, guitarist] mad,” said Rowntree. “Graham really wanted to be in a little indie band, the less successful we were, the happier he would have been. Whereas Alex [James, bassist] wanted to be in Duran Duran, so it was his dream.”

Blur’s fame peaked during the ‘Battle Of Britpop’ chart battle with Oasis, that saw the two bands release singles on the same day.

“We’d always slagged off whoever we saw as our main competition at the time. The music press loved it and usually they would shy away and go and hide in the corner. Oasis weren’t interested in that, however, they gave it back to us blow-for-blow.”

Blur won the race, but Oasis ultimately went on to sell more albums.

“The good consequence was it pushed us both up to the bottom rung of the top ladder,” he said. “We both became household names. The downside was, it stapled both bands together in a way that both of us have struggled to break free of.”

After Rowntree, modern stardom was under the microscope via a keynote with Rebeca León, manager of Latin stars J Balvin, Leon and Rosalia.

In an entertaining session León talked about everything from her love of trainers to working with Beyoncé on Balvin’s Mi Gente single.

“She has such a level of professionalism,” said León. “The biggest artists treat everybody with so much respect. “It’s important that when you’re at the top you don’t become an a-hole.”

The manager also talked about breaking up the music industry boys club (“If you want a seat at the table, you have to make people money”), noting Rosalia is succeeding with an all-female team.

“It makes me proud that for the first time we’ve got a girls club.”