MUSEXPO Europe Day 1 round up 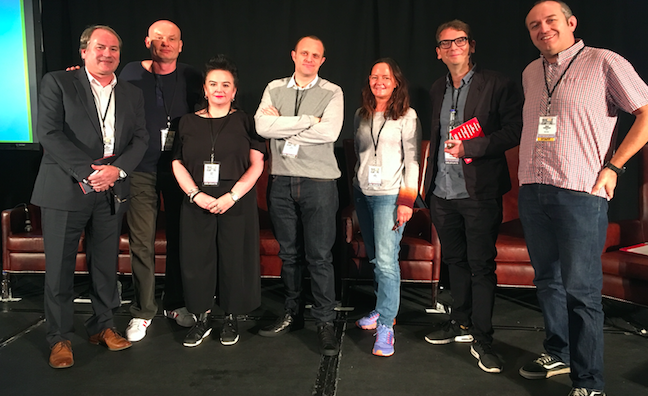 The opening day of the MUSEXPO Europe conference provided an array of informative insightful and animated panel sessions and debates.

“The biggest challenge we [BBC Music} face is riding two horses – the big linear beasts and also being fit for the digital future, thinking about how we operate in digital spaces in an Internet dominated world,” Shennan said. “We have 15 million people listening to and loving Radio 2, but we are in a world dominated by the global beasts of the Internet and we need to be able to find out place in that world.”

Commenting on music listeners’ growing uptake for singles over albums, Cockle commented: “Whilst the album remains the key construct for artists, the streaming world means that album format is being pushed to the margins, so we’re always trying to balance what an artist would like to do and what the public method of consumption is now heading towards. For established artists it is easier, but for younger artists it is something we have to get our heads around progressively and fairly quickly to make sure artist feel that we are representing their talent appropriately.”

BBC Radio 1 and 1Xtra controller Ben Cooper then took to the stage to announce that MistaJam will cover Annie Mac’s 7-9pm weekday new music show on Radio 1 when she takes her maternity leave in January 2017, at the MUSEXPO Europe conference in London.

He also announced also the launch of 25 hour-long downloadable ‘phone first’ music playlists a week for Radio 1 and 1Xtra, themed around the stations’ mainstream playlist and specialist music programming.

Among the key topics covers was the rise of boutique festivals. According to the panelists, the need for a different festival experience from that of huge fields and world famous acts is growing at an increasingly rapid rate.

Hallett, who has worked on a number of boutqiue events in the UK, highlighted the need for greater varitey in the festival market.

“Festvals hadn’t really changed much since the early ‘70s,” he said. “It’s important that we can offer something different. People over the 16-24 age group don’t necessarily want to sit in the Glastonbury mud, so a lifestyle event or a smaller festival offers a different option.”

Meanwhile Neermaan highlighted the growing importance of boutique festivals for up and coming artists, stating “small festivals and boutique events are becoming increasingly important for newcomer bands.” This sentiment was echoed by Bent, who added: “It’s important to give opportunities to new acts at festivals, not just heritage acts.”

The afternoon saw Vevo's Nic Jones discuss Warner, video premieres and YouTube in a keynote interview. Warner Music Group and Vevo announced a new licensing agreement last month, in which videos from Warner artists will be distributed on Vevo-owned and controlled properties, including the Vevo mobile app and Vevo.com. Speaking to Music Week editor Mark Sutherland, Jones said: "We'd been talking to them for five years about wanting to work with them. Maybe we are in a sort of perfect storm where they can see the value of working with Vevo now.

"I certainly think when the EMI purchase by Universal went through, and Warners got Parlophone, they saw how well we'd done for some of those Parlophone artists. Thankfully, there were a number of Parlophone artists who said they wanted to remain working with Vevo because they'd had such a good experience with us, so I think that would've helped. There was no doubt that once [Warner CEO] Steve Cooper had gone there and the relationship between him and Erik Huggers, my boss, I think has really driven that to the point where they really understood just how much we wanted to work with them."

The management panel proved the most animated and raucous session of MUSEXPO Europe so far, drawing the first day of the conference to a close. Moderated by Music Week editor Mark Sutherland, the Global Manager's Futurecast session brought together JEM Music founder Colin Lester, Disturbing London founder and MD Dumi Oburota, Cato Music founder Glen Rowe, ROAR Group chairman Professor Jonathan Shalit OBE and artist manager Sammy Andrews. The panel discussed what it takes to propel an artist to the masses and looked at how management models continue to evolve.

Lester said costs were on the rise. "The difference today is, it's much more in-house for a manager," he said. "We used to be able to go to a record company and have a much bigger team do the job for us. They no longer have them; we have to do them in-house. If we don't, they actually won't happen, so the actual cost of being a manager has become higher than it was. That's one of the biggest problems because our revenues are lower, so when we focus on the real change, that's the fundamental issue of it."

He added that although streaming royalty rates were a bugbear, his more immediate concern was secondary ticketing. "The secondary market is going to destroy what we have," he warned. "If we're not being paid properly on streaming, and streaming is now beginning to account for 60-70% of singles, then that's a major issue. It's pennies at the moment, but it's also pennies that I can get back.

"Secondary - none of us can get back at the moment, so that needs legislation and I believe that's one of the biggest issues facing our industry as managers. There's lots of ways to solve it, but none of them are fan-friendly. They're things that fans don't want to do, so it's an issue."

Oburota advised labels to make "more bespoke" signings. "You can be generating a certain amount of income for the label - be it through your live, be it through just record sales in general, but because you're not having chart success it can be perceived that you're a failed artist, so you get dropped," he said.

Entertainment Intelligence director Sammy Andrews, manager of Lock, said there had "never been a more exciting time to be a manager". Though she claimed the chart system was "really fucking over new artists at the moment", she praised the opportunities the advent of streaming has provided. "Streaming rewards longevity and that's a big thing that needs to click in everybody's minds," she said. "It will grow and grow and I work a lot with data that shows this, specifically with playlisting. You might get put in one playlist and, as a result of that, next week you get put in 10 playlists and then you get put in 20 playlists... It is not that first release week and when I'm talking about the charts being slightly fucked, they don't take that into account.

Meanwhile, Muse tour manager Rowe hinted at what the next Muse tour could entail. "We want to do a stage made of magnets so the band can levitate on other magnets," he said. "It's those questions that keep me awake every night of my life. If there are any magnet technicians out there, please come and see me because that's what we're trying to achieve."