MUSEXPO Europe Day 2 round up 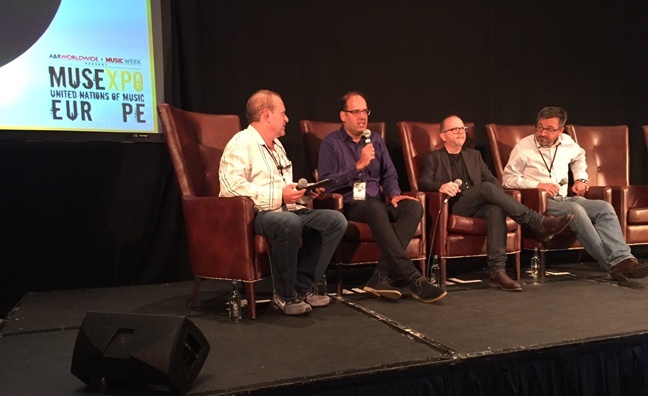 The second day of MUSEXPO Europe featured a number of lively panel sessions on subjects as diverse as marketing and sync deals, the evolution of radio and a spotlight on the Asian market.

Discussing radio in the digital age, panelists Jeff Smith, head of music for BBC Radio 2 and 6 Music, and Edward Kershaw, chief commercial officer of digital music firm 7digital, offered opposing views on the role of data in radio curation in the session, moderated by Joe Denver, publisher and president of US-based AllAccess.

"We don't really use [data]," admitted Smith. "There's so much of it that you can just blind yourself with science, so we don't. We just use our ears to judge the music, which I think is the important factor. But I think it would be irresponsible if we didn't listen to the audience, so it's important for us to do some music taste research."

Kershaw countered: "I'm going to stand up for metrics a little bit. There are ways of using usage and taste metrics that really can inform the way that content is put together for clients.

Fellow panellist Aditya Sharma, head of music for Germany's Radio Fritz said the "democratisation of music" had led to too much music becoming available.

"As human beings, we just can’t manage the volume of music that we are being hit with right now," he said. "So obviously you do have to go into all of the sources you can get, to try and extract what is of relevance to begin with, to even contemplate what might be interesting for radio."

The radio session was followed by a keynote interview with Fulwell 73 Productions director Gabe Turner and producer Leo Pearlman – the production team behind Carpool Karaoke. Rights to a spinoff version of the show have recently been purchased by Apple Music. "The real jumping off point for James [Corden] was the Smithy sketches for Comic Relief, which we were lucky enough to produce and direct,” said Turner. “That really took off. It helped us massively and gave us an introduction to a huge number of stars and talent, especially in the sports world. One of those sketches is where the Carpool Karaoke idea first came from. The first time we did it was with George Michael, but there was no chat, it was just them singing together and then [Fulwell co-founder] Ben made a show with James about Gary Barlow and they did Take That songs in their car and I know that before Ben went to America he was keen to maybe format that in some way and then we started developing The Late Late Show, Ben and James were like, We should do it here.”

Rex-Taylor said partnerships are now integral to the music business. "You can't work solo anymore,” she said. “The music industry's isolated itself in a really traditional format for a long time and this new generation's consuming music in a completely different way. To not partner with relevant brands, as long as they're organic and authentic, and true to the artist's brand, wouldn't make sense. Managers and record labels are a lot more savvy to that, they have to be.”

Highlighting the case of grime artist Stormzy, who landed a deal with Adidas despite being unsigned, she added: "There are loads of unsigned artists that are doing really well with brand partnerships. And it's not just on brand partnerships; we all know the whole model is changing. The business of selling records is just...it sounds silly. A record label doesn't really make that much sense in this day and age - purely because of the way people consume music.

A spotlight session on the Asian market saw A&R Worldwide’s Sat Bisla moderate a panel including founder and CEO of Canvas Talent and co-founder of Farout Media (India), Anurag Rao, managing director of Outdustry (China), Ed Peto, head of programmes at BBC Asian Network, Mark Strippel, and managing director of Phase 1 Events and Entertainment, Oum Pradutt. Strippel highlighted the region’s inability to sufficiently host large-scale live events as a problem, stating: Infrastructure of festivals in the region has come on leaps and bounds in recent years, but the standard of stadia isn’t quite there yet.”

Meanwhile, Pradutt noted the problems posed by the Indian government in getting new festivals off the ground: “When festivals start to grow in India the government pounces for its pound of flesh, so the challenges facing new and growing events are vast.”

The final panel of the day saw the subject of A&R take centre stage, comprising A&R director, Atlantic Records, Alec Boateng, founder and president, Glassnote Entertainment Group, Daniel Glass, senior VP, BMG, and founder of Infectious Records, Korda Marshall, Decca Records MD Rebecca Allen and senior director A&R, Universal Muaic Germany, Sigi Schuller. Mike Walsh, deputy programme director and head of music, Radio X, moderated the panel. Among the topics discussed were gut instinct versus data, with Allen stating: “A good portion of our audience are of a not so young age group, many of which are not using streaming services. We’ve always been about gut over data.”

Marshall agreed, adding: “I’ve never been a fan of stats. So many great acts would never have made it through if we relied solely on data. Today’s content gatekeepers won’t let anything in without data to back it up.”