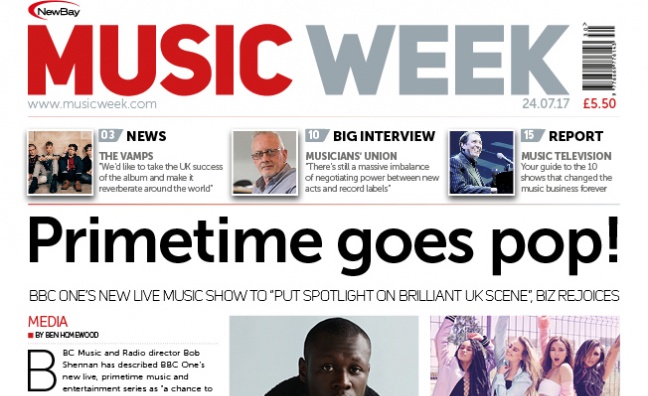 In the new issue of Music Week, BBC Music and Radio director Bob Shennan outlines BBC One’s new live, primetime music TV show, and leading execs weigh in on what it could do mean for the industry.

Elsewhere in news, we look at the story behind The Vamps’ first No. 1 album, and O2 and AMG target a tech breakthrough with their new deal. Plus, rising Sony/ATV star Zak Abel signs to a worldwide publishing deal.

In this week’s Big Interview, The Musicians’ Union’s new general secretary Horace Trubridge looks back at his career so far, and talks about the challenges and priorities facing both him and the union.???

Music Week also speaks to breaking rap star Joey Bada$$ to find out how he’s juggling the responsibilities of being an artist, actor, fashion designer and record executive, and we count down the 10 music programmes that changed the biz forever. Elsewhere, Nude Records founder Saul Galpern talks Britpop, Suede and looks ahead to his label’s bright future

This week’s On The Radar star are the Rough Trade-signed London indie band Goat Girl, while Riviera and Isabella Summers feature in the Sync Story column. This week’s tastemaker is music journalist (The Guardian, Q, i-D) Michael Cragg.

As usual, there’s all the very latest news, charts and analysis. To subscribe to Music Week and never miss another vital music biz story, click here.