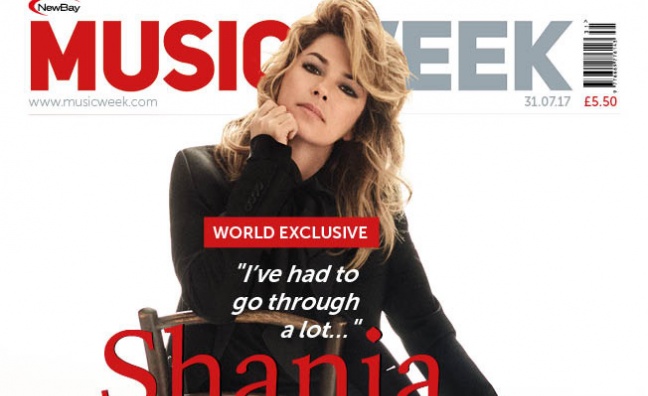 In the new issue of Music Week, we welcome Shania Twain to the cover. The Canadian megastar takes on the Big Interview to talk about her incredible career and comeback album, Now. The bumper five-page feature also includes contributions from the world class team around her, led by Universal Music Group Nashville president Cindy Mabe, Virgin EMI president Ted Cockle and Maverick Management's Scott Rodger.

Elswhere, we speak to Darius Van Arman to hear the story behind his indie label Jagjaguwar and catch up with James Bay about co-writing, guitar music and his forthcoming second album. In addition, we have a special report on the party capital of the world, Ibiza, and explain why not everyone is happy with the island's current direction.

We bring news on a new publishing deal for Noel Gallagher, chat with BPI chief Geoff Taylor about this year's Mercury Prize nominations, and reveal why crossover stars Pendulum are striking out on their own.

Ahead of the Music Week Sync Awards' return for its fourth year on October 19, we announce the first wave of finalists. Because of the unprecedented number of entries we’ll reveal the shortlist in two parts to give the judges more time to watch all entries and allow time for careful consideration before deciding the winners.

This week’s On The Radar star is recent Jagjaguar signing Moses Sumney, while ITV feature in the Sync Story column to give the lowdown on the music from the channel's reality TV juggernaut, Love Island. This week’s tastemaker is freelance journalist Eve Barlow.

As usual, there’s all the very latest news, charts and analysis. To subscribe to Music Week and never miss another vital music biz story, click here.