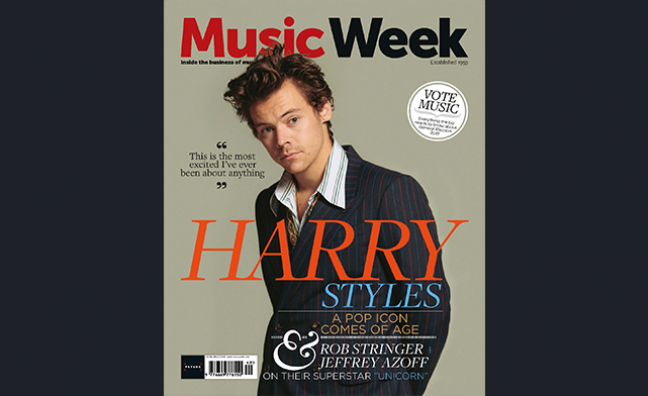 Harry Styles stars on the cover of the new edition of Music Week to reveal all about how he came of age while making his second solo album Fine Line.

With excitement at nerve-shredding levels, Team Styles invited us behind the curtain ahead of the release of the follow-up to 2017’s eponymous chart-topping debut. We joined Styles in a North London rehearsal studio to talk ups and downs, songwriting, One Direction and why the new album has him feeling the “most excited I’ve ever been about anything”.

The lavish campaign for Fine Line is already shaping up to be huge, and we get the full lowdown from Sony Music Group CEO Rob Stringer, who signed Styles to Columbia, and Jeffrey Azoff, the star’s manager. Suffice to say, it’s a fascinating read.

News stories don’t come much bigger than December 12’s General Election, and we line up a range of political and musical figures to debate the possible outcomes for the music biz for this week’s Big Story.

Also in news, there are big developments at The MJR Group, following its takeover by TEG, plus some big catalogue news from BMG’s Peter Stack.

In a jam-packed features section, hip-hop legend DJ Premier lifts the lid on the fascinating story of the new Gang Starr album, while Jack Savoretti reflects on a bumper year.

We chart the incredible journey of Bristol singer Yola in On The Radar, as she tells the tale of how she went from down-and-out frustration, to the Grammys shortlist. It’s a music business story to be reckoned with.

Alongside all that, we bring you the very latest news, charts and analysis.

The issue is available in all good UK newsagents from tomorrow (Tuesday, December 9). To secure your copy, please email Rachael Hampton on rachael.hampton@futurenet.com. To subscribe to Music Week, and never miss a vital music biz story, click here.