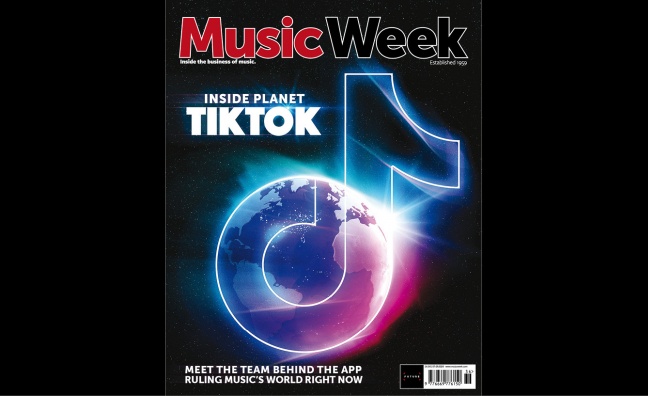 The new issue of Music Week is out now as we welcome video sharing app and full-blown cultural phenomenon TikTok to the cover.

Music bosses Ole Obermann and Paul Hourican explain how the app has found itself at the epicentre of both pop culture and the music business and explain what's next. Plus artists, execs and influencers, including the UK's No.1 TikToker Holly H, reveal the key to going viral.

Elsewhere, we check in with multi-platinum Scottish rockers Travis ahead of new album 10 Songs, their first record to be released via BMG. Frontman Fran Healy, Wildlife Entertainment MD Emma Greengrass and BMG's Alistair Norbury, Jamie Nelson and Terry Felgate offer their thoughts on what is being trumpeted as their finest LP in more than 20 years.

In this week's Big Story we catch up with BBC Radio 2 head of music Jeff Smith, who reveals all about the station’s ambitious plans to replace its annual Hyde Park festival during the Covid-19 pandemic.

Also in news, Townsend Music unveils its first head of digital as the D2C company targets a million customers and rolls out its new fan-funding platform, and Warner Records president Phil Christie lifts the lid on the chart-topping campaign for MC Nines.

In Hitmakers, legendary producer Salaam Remi recalls working with Amy Winehouse on the late icon's 2007 classic Tears Dry On Their Own, while DJ David Rodigan serves up his life lessons and a wicked Bob Marley story in The Aftershow.

Alongside all that, we bring you the very latest charts, news and analysis.