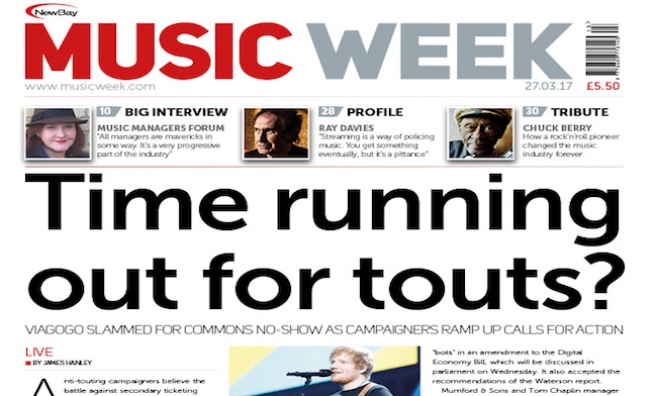 In the latest issue of Music Week, out today, we speak exclusively to some of the industry’s leading anti-touting campaigners in a week that saw the issue reach a “tipping point”. Inside, Ed Sheeran’s manager Stuart Camp, Stuart Galbraith of Kilimanjaro Live, plus Mumford & Sons and Tom Chaplin manager Adam Tudhope discuss the topic in light of Viagogo’s controversial no-show at the Culture, Media And Sport select committee last week.

Taking the Big Interview this week is Annabella Coldrick - the new CEO of artist management trade body the MMF, who outlines her plans to make the organisation bigger, more professional and a real lobbying force. Music Week sees how she’s managing…

Meanwhile, Music Week catches up with The Kinks legend and British music icon Ray Davies ahead of the release of his new album Americana to discuss his fascination with the US and why the record has been 15 years in the making.

Elsewhere, we speak exclusively to Marshall Records managing director Rob Cass, who has hailed the company’s new distribution agreement with Warner Music Group’s ADA as a major breakthrough in its bid to take on the rock world, plus we go inside Take That’s new album campaign with Polydor co-president Tom March.

In a very special report, we also look at the colossal impact label service companies are having in the industry, and speak to key execs about the future of this ever-evolving sector.

Also in the issue, following the March 18 passing of Chuck Berry, aged 90, the music industry lost a true original – Music Week counts the ways he changed the business forever.

Plus we have all the very latest chart analysis from Alan Jones and a whole lot more to boot, including the latest new artists to look out for and the most innovative sync deals in the market.

Pick up your copy of Music Week today or subscribe here.