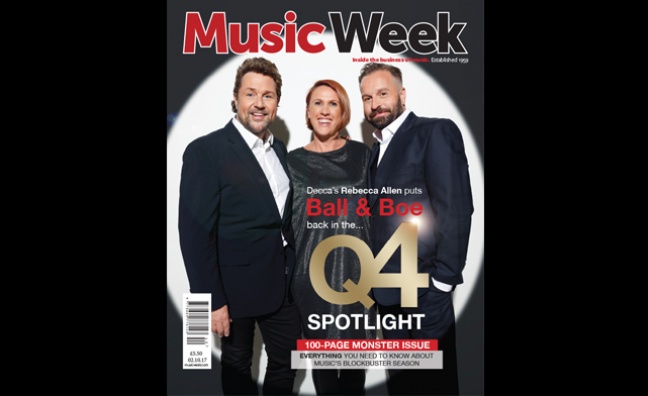 Inside your new-look edition of Music Week we give you our very special, 100-page Q4 Report – containing all the information you need to know about the biz’s blockbuster season (but were probably too busy to find out).

Gracing our cover, and heading up our monster Q4 issue, are none other than the chart-smashing, besuited behemoths Michael Ball and Aflie Boe, aka Ball & Boe. In our big interview, the duo join Decca president Rebecca Allen to give us insight into how they scored the biggest release of 2016, and how they’re working harder than ever before to make sure their new album, Together Again, is even bigger.

Alongside our big interview - and across a whopping 44 pages - Universal, Sony, Warner, BMG, Absolute, PIAS and Now reveal their Q4 hands, giving us an in-depth look at the albums set to dominate the gifting season while, in our big news story, we also speak to key retailers, including HMV, Sainsburys, Amazon and Deezer about how they’re preparing for the likes of Taylor Swift, Sam Smith, Liam Gallagher, Rita Ora, Pink, Paloma Faith and many more.

Elsewhere, over two decades since forming, Music Week speaks to Feeder about their incredible career to date ahead of their upcoming greatest hits package, plus we quiz BMG’s frontline and catalogue bosses on how they’ll build on their biggest ever year in recorded music since reforming. In news we also speak to former First Access Entertainment manager Lucy Tallant about her new label and development company and BBC Radio 1 DJ Huw Stephens celebrates the 10th anniversary of BBC Music Introducing ahead of the platform’s O2 Academy Brixton gig on October 4.

On top of all of this, following our huge revamp, all sections of the magazine have a fresh new look and some new editorial additions. In our new regular feature Hitmakers, George Michael’s lifelong friend, long-term songwriting partner and latter-day manager, David Austin, talks about co-writing the late, great singer’s huge 1997 ballad, You Have Been Loved. Plus in our Aftershow feature, Clive Davis - widely viewed as the ultimate record executive - reveals what his career has taught him…

Plus there’s all the very latest news, charts and analysis, including our new massively enhanced market shares and statistics page that goes deeper into the week's sales and streaming figures than ever before. Look for the new-look issue in all good newsagents now. To subscribe and never miss another vital music biz story, click here.