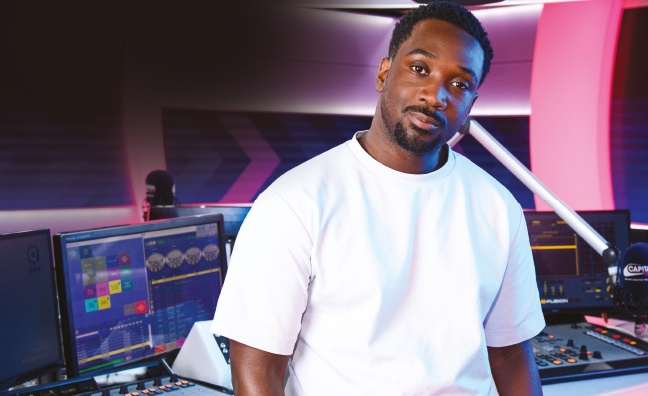 It’s been a memorable year for Robert Bruce so far, and now the Capital Xtra DJ has followed a Music Week Awards win with a move to the Breakfast Show on the station.

Bruce has moved from his own Homegrown Show, which launched four years ago with a remit to break new acts, to join Shayna Marie Birch-Campbell on the Breakfast Show.

The DJ recently told Music Week that he intends to maximise his opportunity to support emerging Black talent across the industry promising to “represent my community to the best of my ability while I’m in this chair”.

Speaking in the current edition of Music Week, out now, Bruce explained how he’s made it his mission to provide a home artists he believes in.

“My show breaks acts by being brave, taking a chance on artists and tracks,” he said. “We’ve just got to keep on the ground really, keep involved with the scene, with the community and understand who’s hottest off the streets, what songs are going off in the clubs. That’s how we keep breaking artists and pushing them through, especially in this commercial radio space. It’s very hard in a commercial space, but we’re doing it to the best of our ability.”

Bruce picked out AJ Tracey, Dave, Headie One, Fredo and D-Block Europe among a long list of artists he has supported, and pointed to his Homegrown Live event as further evidence of his commitment to supporting the UK scene.

“It always starts with support, because if you support an artist when no one else is really supporting them, they’re always going to remember you,” he said. “It doesn’t necessarily have to be here on the radio station, it could be a DM saying, ‘I see what you’re doing, keep going’, or, ‘I like that song that you put out.’ They might not be ready for my show yet, so it’s about letting them know that they are doing the right things, sharing their releases, a little tweet, something on your Instagram story.”

When it comes to finding new music, he said the studio is the best place to be.

“The internet helps a lot, but one thing that helps more than anything is being in the studio,” Bruce explained. “When you’re in the studio, you see what producers are working on, what artists are coming through with next before they’ve even released the music. I like to be on the ground that way.”

In the UK, how many stations play predominantly Black music?

“I’m excited to hear all of the bigger artists come back with their albums as well,” he added. “I know we’re gonna have to hear a Stormzy album, a Potter Payper album, I want to hear what Ghetts sounds like next, and what the next Nines album sounds like.”

Bruce also spoke about the fierce levels of competition in radio for Black music.

“It’s very hard, radio is very competitive,” he said. “In the UK, how many stations play predominantly Black music? Capital Xtra, BBC 1Xtra, and maybe Kiss Fresh. So if you think about it, the spaces to have a job on radio as a presenter for the Black community are very small. It’s sad.”

Bruce is pushing to help create more opportunities in the sector, praising newer stations such as No Signal and Reprezent.

“I wish there was more choice because so many of my friends are on community stations, and they’re so super-talented,” he said. “There’s literally no space, whereas other genres have multiple stations in different regions, and you can find a space somewhere else very easily. In that sense, radio is super-competitive and that’s why I never take this seat that I hold for granted. It’s so much more about reflecting my community to the best of my ability than it is about me, because so many people want this position.”

Capital Xtra increased its weekly reach to 1.37 million in the latest RAJAR figures this week, while a successor for the Homegrown show is set to be announced soon. Read the full Robert Bruce interview here.