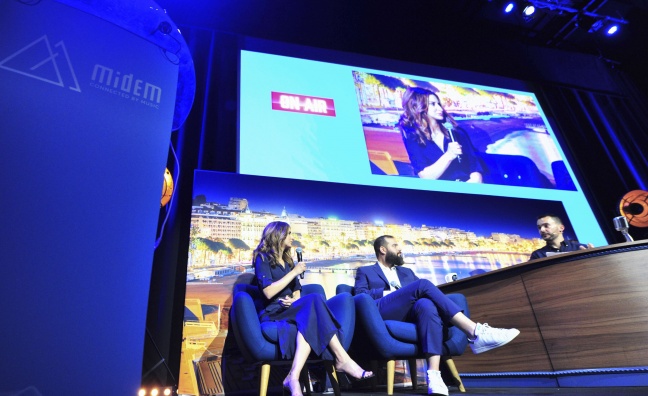 The sun shone on Day 2 of MIDEM, but the conference’s luck was out when it came to one of its keynote speakers.

New Epic Records chairman & CEO Sylvia Rhone was due to be the star attraction of the panel programme but had to pull out due to food poisoning.

This left the keynote programme short of a little star quality, despite the new format that presents speakers like guests on a late night US talk show, complete with Cannes skyline backdrop, warm-up DJs and MIDEM boss Alexandre Deniot bursting on to the stage like James Corden.

Filling in for Rhone was US power player lawyer Dina LaPolt, who certainly gave it her best shot, shooting from the hip on a variety of topics, from the #MeToo movement to the Spotify-songwriters row.

Not all her pronouncements work out of the context of a rapid-fire half hour chat – her take on the expectation to be available to clients because it's "always 9am Monday morning somewhere" caused some consternation on Twitter, but she was surely exaggerating for comic effect. After all, it definitely isn’t always 9am Monday morning somewhere, even if it occasionally feels like it in the music business.

But plenty of others hit their target, as she explained how she pitched different aspects of the Music Modernisation Act to get both Republicans and Democrats onside and let rip on Spotify’s decision to appeal the Copyright Board’s ruling that payments to songwriters should be increased.

Noting the streaming service’s Secret Genius project and other moves designed to keep songwriters on side before the move, LaPolt called the appeal “bullshit”. “It was like all this time they were behind closed doors scheming,” she said. “But, if they withdraw their appeal, there is still a way out for Spotify.”

She ended with some sage advice for artists: “Be true to yourself. Look at Billie Eilish: has she compromised anything? Hell no.”

Many in the biz might have preferred it if the roles were reversed, so rare is it to have someone from Twitter speak at a music business conference, but Kasha and Al-Hamdouni were certainly game, giving a number of insights into what works and what doesn’t on social networks.

“The biggest mistake artists make is thinking they are too cool to engage,” said Kasha, with the pair praising the likes of Miley Cyrus, Zara Larsson and Lil Nas X for setting new standards in fan interaction.

But it’s not just for the new kids on the block, Kasha stressed. “Mariah Carey is the meme queen,” she said. “She was an artist before Twitter but she leans into it. She completely engages with her fans and she’s usually the one starting the memes. It’s a way for her to take control of the narrative.”

Al-Hamdouni stressed not everything labels try can work (“These days, a viral video just means you’re spending $5,000 or less on it”), with the real ability to influence things shifting towards fans. “Fans have so much power,” he said. “They have no idea.”

And O’Donnell at least allowed other platforms to get a mention, with Kasha stressing the need to have different content for each social channel.

MIDEM continues tomorrow, with the likes of J Balvin’s manager Rebeca León and Dave Rowntree from Blur due to appear.