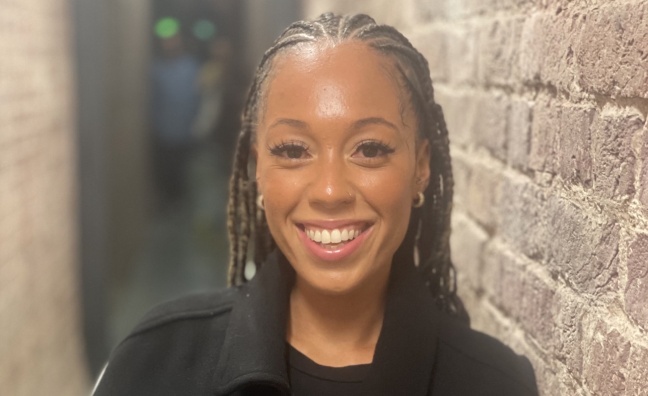 Music Week is teaming up with YouTube for the Women In Music Awards in October – Black History Month – with our second content offering and webinar event, The Legacy Series – Gifted And Black: Women In Music. Here, we meet Anique Cox, who left major labels behind to become manager of Bree Runway, one of the most exciting breaking British artists of her generation...

Anique Cox’s music industry story is an example of what can happen when you trust your instincts. Cox manages Bree Runway, who is signed to EMI, where Cox previously served as marketing manager, having risen up the ranks of the department.

And it was while working for the major that Cox felt the urge to move into management and formulated the idea of taking East London artist Runway on as her first client. And so, after spending the first part of her career in the major label system, she took the plunge.

Since then, Bree Runway has emerged as one of the most exciting new acts in the UK, straddling the worlds of music and fashion and leaning into a dedicated fanbase to build up an impressive series of accolades including a spot on the BBC Sound Of 2021 list and a BRITs Rising Star nomination this year.

Here, she reflects on her story so far…

Where did your music industry journey begin?
“My music industry journey started at Island Records in 2014 where I began as a press intern. I grew up surrounded by music of all genres, I saw and understood how the power of music brings people together, I developed a passion for it from a young age. I featured in a Kurtis Mantronik music video aged six and my family have always been in and around the industry. My uncle and his collective, The Quest Project, was signed to Island Records in 1999. Having my journey start at that very label was not only a personal accomplishment, but a full circle moment.”

What were the biggest takeaways from your time working at major labels?
“I spent almost five years at EMI, from marketing assistant through to marketing manager. That trajectory gave me a window into every aspect of the major label system, from admin to execution, and provided invaluable learning and insight, too. As a marketing manager, you’re in the hub of the machine, overseeing all elements of a campaign and artist development, from creative and strategy, press and promotion, to live shows and legal clearances. Management felt like an evolution that allowed me to be even more immersed in the artist’s world.”

Talk us through the decision making process that led you to pivot to management full time. Was it a daunting choice?
“Going into a new field with no prior management experience was very daunting, particularly when you’re dealing with a global priority act. But it was a risk that I felt strongly compelled by. At the time, EMI was going through a lot of change, and I felt my time there had expired. I was ready for a new challenge and a new lease of life, and becoming Bree’s manager felt like an irresistible opportunity. From day one, when she signed to the label, I'd always felt a deep-seated sense of conviction and belief towards her talent and her music, so the pivot to play an integral role in taking it to the next level with a one-of-a-kind artist felt like a natural progression.”

Can you shed some light on the bond between manager and artist and how it can flourish?
“Every artist and manager will have a different dynamic that works for them, depending on the artist’s needs and demands. I think the fundamentals rest on trust and a shared vision. I’ve worked with Bree since she signed to EMI in 2018, and throughout, we’ve always had a very honest and personal relationship which has amplified as we grow and develop.”

Have you felt supported by the wider industry in your career so far?
“I definitely felt supported by EMI at the time I moved into management, there was a definite sense of unity and togetherness. Since settling into the role, naturally things have moved on and there has to be a degree of separation between label and management, as well as sharing that common goal unity for achieving the very best for your artist. As an independent manager, I’m eternally grateful to the MMF and Power Up for their continued support and guidance.”

Having been part of Power Up, can you tell us what that programme means to you personally?
“The Power Up initiative has been incredibly helpful and drives a like-minded support network. It has opened doors and expanded my learning horizons in areas that were previously lacking, as a result of inexperience within talent management. The synergy and community created by Power Up provides a powerful and beneficial advantage. It’s comforting to have a foundation that is so committed to supporting young Black execs.”

Do you feel the situation around discrimination and equality is moving forward at all?
“Yes and no. There’s a lot more conversation and some slow-burn change around this, but in my experience, as a young female of colour, until you’ve attached yourself to a certain level of success, I think the industry will always default to prioritising more traditional and experienced opinions, sometimes from older, white males. The scenarios around discrimination and equality will change when the make-up of senior management is more diverse and blended so there’s a broader representation of perspectives and a broader palate of ideas and solutions to draw from.”

How can the industry ensure that talent flourishes, both in terms of creative talent among artists and new executives?
“By being open and bold and finding new and innovative ways of developing talent. Particularly as technology evolves, it will force a new approach. New executive talent will organically flourish as things evolve, and when that bloc of traditional senior management is more balanced. Industry foundations certainly need shaking. Now more than ever, the industry is largely driven by data, numbers, and viral moments, rather than investing and nurturing creative music talent.”

What’s been your personal highlight of the past 12 months, a ‘wow moment’ that has really made you stop and reflect?
“Bree shifting 900 tickets in New York in minutes from going on sale was a definite wow moment. Witnessing her perform her debut US headline to a sold-out crowd was very fulfilling. Seeing her music connect beyond online, in real life, on the other side of the world, after such uncertain times during the pandemic, made things feel so much more tangible.”