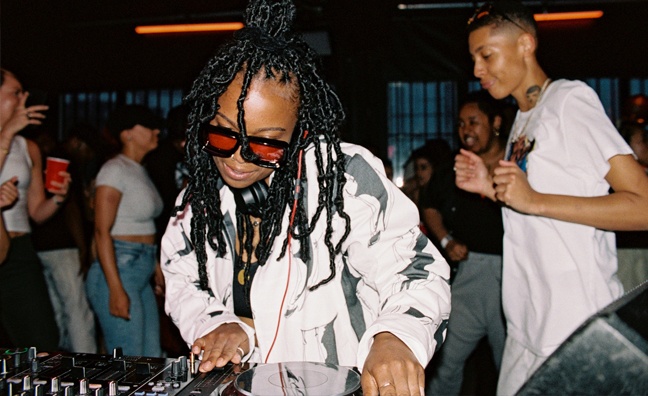 Music Week is teaming up with YouTube for the Women In Music Awards in October – Black History Month – with our second content offering and webinar event, The Legacy Series – Gifted And Black: Women In Music. Here, Music Week’s Colleen Harris meets the inspirational DJ Jordss.

Jordss – real name Jordanne McKenzie St Rose – is one of the most exciting talents in the DJ world right now.

From first touching the decks in her bedroom in her late teens, Jordss started her career playing the pub scene during her time at university in Brighton. She has quickly moved from playing five-hour sets for free drinks to now being the go-to DJ for brands such as Burberrry and supporting Megan Thee Stallion.

What's more, she is also the driving force behind two incredible initiatives.

First, she is the founder of Girls Can’t DJ, an online search engine and talent incubator for women and non binary DJs which was forged from her growing frustration with gender imbalance of line-ups. During lockdown 2020, meanwhile, Jordss created her radio show Black Joy Archives with the intent to spread black joy through shared experiences and happy memories of music.

And all of this has been achieved while overcoming some huge obstacles.

In 2020, Jordss suffered a heart attack, aged just 27. Rather than let it stop her, she come back even stronger, and even curated a Boiler Room session last year to help raise money for the British Heart Foundation.

Here, Jordss tells Colleen Harris all about her journey so far, the lessons she’s learned along the way, and her mission to help female DJs get the respect they deserve…

What was your initial inspiration behind founding Girls Can't DJ and Black Joy Archives?
“Both were founded from a place of pain and anger. Girls Can't DJ; I remember years ago scrolling on the ‘gram and seeing line-up after line-up and it was overwhelmingly unbalanced. I was really pissed off so I DM’d the promoters. A lot of them were people I knew, I was like ‘Why haven’t you booked any girls? Why is it just mandem on your lineup?’ They were like, ‘Oh apart from you, I don't really know any female DJs.’ So I was like, ‘Okay, it’s lazy, but I'm gonna give you the benefit of the doubt’ and I instantly came up with the idea of making a database where you could search for a DJ by genre and location. Then there's no excuse: you have to confront the fact that you're being sexist. So that's what fueled Girls Can't DJ.”

And what about Black Joy Archives?
“Black Joy Archives I started in the first lockdown in 2020. I was still in recovery from heart surgery [and] that shifted my whole perspective on life in general. I realised I only want to put my energy into things that make me feel good and create more wholesome content and projects. It was around [the time of] George Floyd’s murder, I was in a very dark space and just seeing negative connotations around blackness in the media. So, I started having conversations with people, calling random friends and asking, ‘What song makes you feel good?’ then made a playlist for myself and played it every day. When I listened to the songs and remembered what the song meant to them, it really was my saving grace. It was so healing for me. So I thought, ‘These phone conversations, how about if they turn into short voice notes and it becomes a radio show?’ That's basically how Black Joy Archives was birthed.”

Who were (or are!) your role models in terms of DJs?
“Growing up listening to Choice FM, people like Angie Le Mar and Jenny Francis – the impact they made in the music industry, they're legends! I'm actually doing a Live Black Joy Archives at Shoreditch House and Angie Le Mar’s gonna be part of the panel. I’m gassed! I'm going so hard because she's so inspirational, especially being a Black British woman. Now, I look at women like Honey Dijon, even though our DJ sounds are very different, I appreciate her journey and her career and how she holds so much respect and takes up so much space unapologetically. I think it's so admirable and she's absolutely killing it. I love to see it. Electronic music [has] been whitewashed by white men. Any line-up Honey Dijon’s on, she's the main act. She’s definitely a role model.”

What have been the biggest challenges you've faced on your journey to making a name for yourself as a DJ?
“Surviving a heart attack has been a massive hurdle because it came at a time when it felt like my career was starting to really gain speed. Then it just stopped. This industry is very fickle, you could be hot today and there's a new kid on the block tomorrow. So I was shook, I was scared. I really did think that was going to stop me in my tracks, but it didn't. It just gave me more ammunition because I changed my way of thinking. I realised the importance of doing things that you care about. I curated a Boiler Room last year with a sick line-up of my friends. We streamed it and raised money for the British Heart Foundation. It was a really special moment and I was really glad that Boiler Room and Reebok supported the event. I definitely want to do more charity stuff and raise as much awareness for cardiac arrest in young people because it’s important. It's easy, especially in this industry when you're freelance, to just go, go go. Health is the last thing on your priority list, when actually it really does need to be at the top. There are symptoms with your heart that can easily be confused with anxiety or burnout, when actually young people do have heart problems as well. But we just don't know about it, it’s not recognised or spoken about enough. So I definitely want to do more because I feel like I don't speak about it that often. I think before I was still traumatised, sometimes I find it hard to speak about. Also I never want to feel like I’m capitalising off the trauma. But in the same breath, I do want to use my platform to raise awareness, it’s just finding that middle ground where it doesn't feel exploitive.”

Often on festivals you see the same names over and over again... At this point it’s utter laziness

Do you have any advice for young women wanting to break into DJing themselves?
“I think DJing is fast becoming a really popular profession, because of Instagram it's really glamorised. I mentor some girls and my advice is always make sure your reasons for doing this aren’t money and fame. I've been DJing for 10 years; for the first two years I was DJing for free drinks, after that I was DJing for very little money and very long sets. But I was doing it for the love of it. I gained practice and knowledge. People think that you shoot up quickly. It's a long journey. But don't let anyone put you off doing it especially if you're a woman. Don't think you can't because you really can.”

You spoke about the historical inequality of line-ups earlier. As you play festivals a lot, what's your take on the lack of equality in bookings right now in 2022?
“It's really frustrating. At this point it’s utter laziness. Often on festivals you see the same names over and over again. I don't even think promoters or festival bookers go into the clubs like they used to and see who the new talent is or see who's killing the scene on the floor level. It's just who's popping on the ‘gram, recommendations, or through agencies. That's why Girls Can’t DJ is really important for me. I appreciate Strawberries And Cream; we've done a stage there two years in a row and they book a lot of female acts. But there's a lot of girls fighting the same fight; I know Jaguar the DJ is fighting the fight, and there’s Girls I Rate [founded by Carla Marie Williams]. There's a community of us really trying to kick down doors and open up that space. We're getting there. I don't want to make it to the top and look around me and see no one that looks like me. I want to look around and see loads of other women, loads of other Black women. I think there are more people on that wavelength now. I'm gonna fight the fight. This is my purpose.”