'This year is about raising the bar': James Stirling on the return of BBC Music Introducing Live 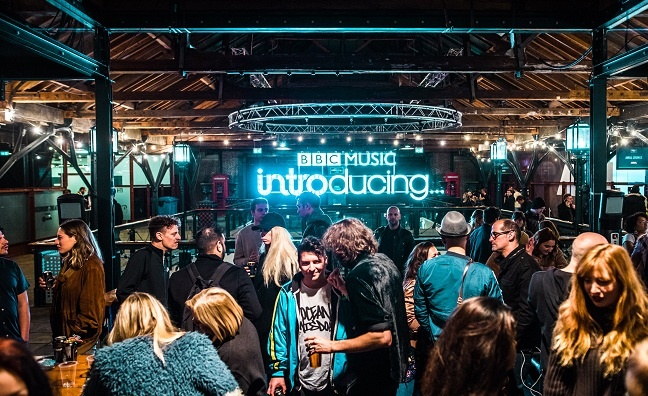 Spotify is running a programme of talks featuring Craig David, Nina Nesbitt and DJ Semtex. Dirty Hit label boss and The 1975’s manager Jamie Oborne will be in conversation in the Discovery Theatre on Friday (November 1).

In the latest issue of Music Week, we preview this year’s BBC Music Introducing Live line-up. As well as performances from bands including Catfish And The Bottlemen, there will be speakers including Emily Eavis, Amy Lamé and Merck Mercuriadis, plus a strong presence of BBC Radio talent including Jo Whiley, Dermot O’Leary, Trevor Nelson, Steve Lamacq, Tom Robinson and Mary Anne Hobbs.

Here, James Stirling, head of BBC Music, takes us inside the plans for the 2019 edition…

What was the industry response last year?

“It was overwhelmingly positive. I’m involved in a lot of events and I can't remember such goodwill being generated. What was really pleasing was that people were willing to give their time to come down, chat and engage with younger people, but also they walked away with a smile on their face. We tried to make it a really engaging environment, there is music everywhere you walk, there are interesting people in every room. The messages I've had from the music industry have been overwhelmingly positive.”

What are the ambitions for this year?

“It is the second year at Tobacco Dock. I suppose year one was making sure that the industry understood what we were trying to achieve, to make sure that people bought into it and came and had a good time and found it valuable. And this this year is about raising the bar really and just trying to increase numbers and increase the profile. The ambition is to inspire the future generations of the music industry and artists, and we think this is a really good way of doing it.”

Does it help equip new talent to deal with the biz?

“I think that's right. The people I talked to in the music industry haven't met many people that have just walked into a job. So I think people empathise with that who are now in very senior positions in the music industry, people remember the days where they were trying to get their first break. They're really willing to share their experiences. There is a wealth of knowledge within Tobacco Dock over three days, so people who are trying to take their first steps in the music industry can really tap into that knowledge. People have been very generous with their time and in sharing their experiences. It's really lovely to see actually, particularly with BBC Music being the catalyst to bring that together.”

Artists have to have to do so much more development these days. Does the event reflect that shift?

“Yeah, I think so. One of the most popular areas of a space is the Feedback Centre. There are probably 30 or 40 people in that room at all times, and you can just literally roll up with your music, go in and get immediate feedback. That's helped artists in many ways, because that development needs to be done by artists at the moment, they need to be self-critical along the way. So spaces like the Feedback Centre are incredibly valuable in hooking up people with music industry professionals, whether that's A&R, labels, radio pluggers, or people who run radio playlists. Artists get immediate feedback for their music and it really does help in terms of the development.”

How important is it for BBC Introducing to have such a high profile at the event?

“This is the most important thing we do for BBC Music Introducing. Every day, we support artists. The purpose of Introducing is to discover and nurture new artists to really help them take their first steps – we do that every day, either on the radio or through our digital services. We try to hook up artists with radio play, we try and take them to our events around the country or internationally, and we effectively introduce them to the music industry as well. So for us, this is a sort of physical manifestation over three days of things that we do every day across the BBC. It's actually really important for me to bring the Introducing team together as well. We have 38 local radio stations that are connected to grassroots music and through that they filter the music through to us for the radio networks. So to bring those people together for three days is great, and actually each of those areas are bringing an artist that they really believe in to perform at Tobacco Dock. So it's an incredibly important event for BBC Music Introducing.

“Tom Robinson is champing at the bit to get down there and speak to new talent. Tom's amazing. His passion for discovering new artists is incredible. Tom was the first person to play me Ed Sheeran, I remember back in 2010 or 2011. He literally came running into the room saying you've got to hear this. Tom is a passionate advocate of discovery and he'll be a vital part of what we're doing across the weekend.”

“It's incredibly positive. Radio 1 are amazing champions of Introducing, as are Radio 2, 6 Music and 1Xtra. They all have a tendency to listen to the music we send them and help discover new artists, and help to grow them. So for the radio stations to come down and have a place to broadcast over three days – we've got 30 hours of live radio broadcast across three days, which is about as much as we do at Glastonbury. You can see the importance of the BBC places on this event.”

Who are you expecting through the door?

“I think it's anyone that has an interest in the music industry. So clearly there will be thousands of artists who are coming through who just want to network and share their music. But actually, I'm expecting the next set of entrepreneurs to come through. I'm expecting people from music college to come. I'm expecting people who are running their own club nights, people who have aspirations to manage bands, people who want to be an A&R. I think the breadth of what we offer is really enticing for anyone who wants to be involved as a music industry professional. it's really open this year. I think we'll probably find some more families coming this year too. It's a 14-plus event, and we'll probably find parents bringing their kids along who just want to think about the creative industries as career choices. We will certainly have more people through the doors this year, part of our ambition is to keep increasing numbers.”

Subscribers can click here and here to read the Music Week preview.

Click here for the full line-up of events at BBC Music Introducing Live 2019.