'We feel we have something magical': Inside the new Elton John film, Rocketman 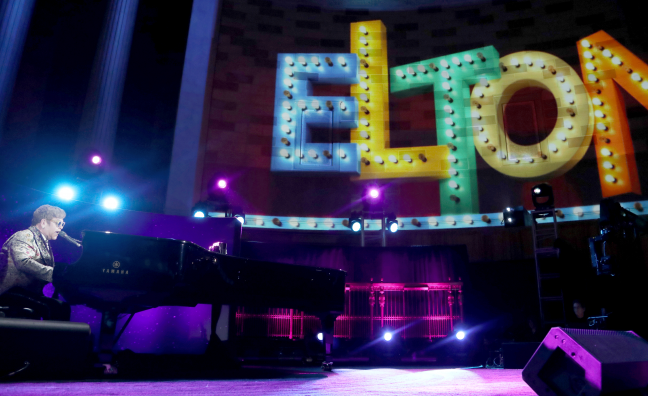 Abbey Road Studios hosted a special preview event for the forthcoming Elton John biographical musical fantasy drama Rocketman, which is released in May.

A 20-minute clip of the film was screened to an invited audience at the legendary London studios on Friday (March 22).

British actor Taron Egerton, who stars as the singer, director Dexter Fletcher and musical director Giles Martin took part in an on-stage Q&A following the screening. Rocket Entertainment CEO David Furnish, John's husband and a producer of the film, was also in attendance.

"It's a very exciting and daunting time but we are incredibly proud," said Fletcher, who replaced Bryan Singer as producer of the smash hit Queen biopic Bohemian Rhapsody. "We feel we have something special and magical, something that's going to elevate all of Elton's catalogue and the man himself and his story, his legend and his history, and we're all incredibly proud to be part of that."

With a lot of truly great artists the deeper you dig, the more complex and beautiful their work becomes - and Elton is truly unique

Martin added: "[With] a lot of truly great artists the deeper you dig, the more complex and beautiful their work becomes - and Elton is truly unique.

"For me, it's been a total joy and an inspiration to work with Dexter and Taron because they just go, 'Let's have fun!' We want to push boundaries and do interesting things and the fact [is] it's a fantasy, so from the word go it was like, every song goes somewhere else. It goes to a three-dimensional space, if you like, and we had the tools to do it. I had to just keep up speed with them really."

We’ve been at @AbbeyRoad for a sneak preview of the new @eltonofficial film @rocketmanmovie pic.twitter.com/2rrcu7ZJJy

The film makers said the movie, which is released on May 24 in the UK, began to take shape in early 2018.

"It was just over a year ago, in February of last year, that we recorded two songs with me playing the piano in this very studio, being produced by Giles," said Egerton. "That was the start of the journey."

"That was really the catalyst for making this whole project happen," added Fletcher. "We knew that something extraordinary had the potential to happen."

John is currently in the midst of his 300-date Farewell Yellow Brick Road tour and will retire from touring upon its conclusion in 2021.

Egerton added: "This is a movie about a great guy and songwriter and it was always the mandate that we would slightly reimagine things and play with things, with Elton's blessing of course.

"Elton essentially gave me the licence to go and make it look quite ugly at times and that was always very important to me. This movie is primarily a celebration of Elton's life and work and his partnership with Bernie Taupin. But it's also a story about someone who was not well, becoming well, and that was always what I found most interesting and most exciting about it. I feel that the balance Dexter struck between those two primary aims was really great."