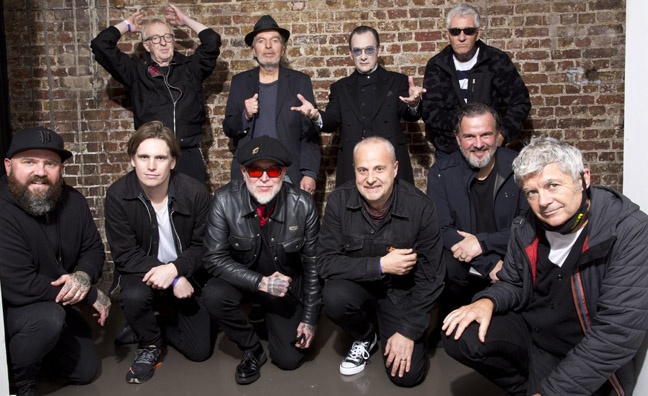 Last week, the original line-up of punk legends The Damned announced they are reuniting for a one-off tour next year, which will kick off on July 9, 2021 at London’s Eventim Apollo. But that wasn’t the only headline of the day. The news was also delivered by the band in person at the Roundhouse in London, for what has been billed as the first socially distanced press conference to be held since the UK went into its lockdown in March. Here, Alan Edwards, founder of Outside Organisation, tells Music Week about the logistics of doing press conferences in the age of Covid-19…

"Obviously, these were particularly strange circumstances to hold a press conference in. In fact, I think it was possibly the first press conference, not just in music, but in any sphere that I’m aware of since the beginning of the year. So, it was a big deal. Many eyes were upon us and we knew we had to get it right.

It was also a reminder that the key to any successful press conference, regardless of the pandemic, is organisation. It takes a team of people to stage an event like this and it’s all about everyone working together. We had a fantastic group of people planning, worrying, strategising day after day in the lead up. It was brilliantly led by management Don Jenkins, Craig Jennings, and Dan Brown from Raw Power; Paul Ryan their agent from UTA and the band promoters, Steve Homer, Ali Castriotis and Anna Golden from AEG. From the get-go, everybody was incredibly constructive and supportive and that’s the difference between OK and great.

We looked at every single detail repeatedly, particularly in view of Covid-19 and the new Tier 2 regulations. Of course, a lot of attention had to be paid to social distancing and masks and so on, but we didn’t want to kill the spirit. Afterall, this was punk rock! We had to strike a balance between anarchy and safety. This was an extraordinary experience, not just for the band but also the media. I think everybody felt a mixture of nervousness and excitement at actually attending a press conference like this. Everybody was very conscious of what was right to do, but our team were there to reassure, guide and remind if necessary, at all times, as were Cat and the Roundhouse team.

The reason for the press conference was the reforming of the first ever punk band; the first punk band to put out a single – New Rose; release an album Damned, Damned, Damned and the first punk band to tour the States. Having all the original line-up of The Damned made it a precious and special thing. There are no other big punk bands who have the original line-up, so I was conscious all the way through that this was history in the making and should be treated with a reverence.

We took great care to create the scene of ‘77. We realised not everybody would have seen The Damned first time around. We were lucky enough to get Don Letts, broadcaster and DJ from The Roxy, as well as a member of Big Audio Dynamite, to introduce the band. That helped give it authenticity. We re-produced copies of punk fanzine Sniffin’ Glue and management created some special Damned masks. The attention to detail helped make the event really special.

We took great care regarding the journalists we invited. We made sure everybody who had been interested in or written about punk was invited, as well as contacting younger media who weren’t fully aware of the band. That made it very important to explain the history.

We had to strike a balance between anarchy and safety

We were aware that some media were interested in the angle that doing a press conference was a story in itself. We went to people like ITN, Sky and AP, who wouldn’t necessarily be covering a punk reunion tour, as well as core music publications like Mojo and Uncut. People were amazed we were doing it at all. They wanted to know how it would work and whether it would be OK. We were very thoughtful in spreading our net as wide as possible. It wasn’t just limited to fans of the band.

For those journalists who were unable to be there, we ensured they could virtually be there via a Zoom link. There were a few glitches, but this enabled writers from The Daily Mail, Metro, i-News and more, who couldn’t make it for one reason or another, to participate. We also provided B-roll footage for Sky and others, as well as audio clips for radio stations.

I did an intro before Don Letts came on stage and talked about my office in Covent Garden back in the '70s, and how my landlord was the owner of The Roxy. In those days Covent Garden was a disused fruit market, our office had a staircase with slats missing, we had no electricity or heating. One winter, I remember we had to break the furniture up and burn it inside the room to keep warm. What the health and safety would have made of that, that’s anybody’s guess!

As the band said, thousands of people seem to remember seeing The Damned at The Roxy but there can’t have been many there as it was a small room. The idea of social distancing then would have been unthinkable! Matt Hancock wouldn’t have approved.

Our team were incredible. Caitlin Buller led brilliantly all the way through. She’s a young PR but without doubt would be able to run any press conference in the future. She was so patient and methodical. We had the Outside A-Team on the day. Chris Goodman, who oversees the PR for BST Hyde Park shows, was there; there’s nothing he doesn’t know about live events, so just having him in the room makes everybody more relaxed. All our team played a part on the day – Sope Soetan and Aimee McIntosh were there to assist with media, and even 21-year-old Luke Moring was lined up ready to ask a question (if necessary) about which of the other big punk bands like the Pistols, The Clash and The Stranglers, they liked best!

After the event, there was a series of one-to-one interviews including ITV London News, PA, Reuters, AP and Uncut Magazine. Following the announcement, the story has travelled far and wide, hitting televisions and online publications in the hours following, and in papers and on radio since.

All that said, best laid plans are nothing without the stars and The Damned were just great. They were friendly, cheerful, did everything with a great sense of humour and a little bit of punk spirit. They tipped it from being a well organised press conference to something very special. I think we’ll remember the day for a long time to come."

* To read our report from The Damned press conference, click here. To make sure you can access Music Week wherever you are, sign up to our digital issue here.