Primetime for heroes: What the biz wants from the BBC's new primetime music show 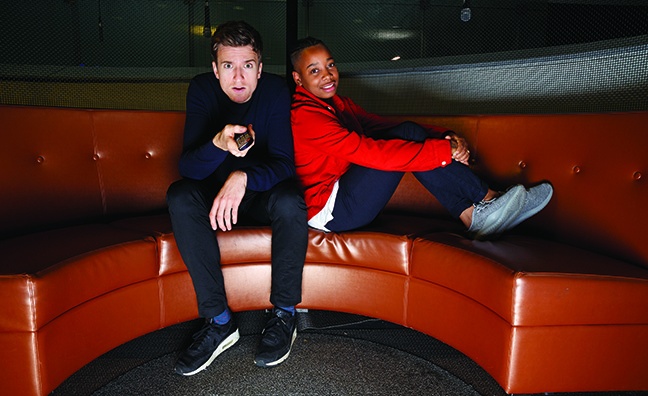 Greg James and 1Xtra's Ashley "Dotty" Charles will host the show, with Jason Derulo, Charlie Puth and Jessie Ware all set to perform on episode one.

Here, we asked a host of music industry figures what their hopes were for the channel's first weekly contemporary music show since Top Of The Pops...

Jack Antonoff,
Bleachers
“I hope it can showcase who the really great artists are. One thing I like about the past is that there was a great separation between who had it and who didn’t. It’s easier to trick people now, so a live show can play a part in saying, ‘This is worth paying attention to’. I also hope they’ll be really discerning.”

Diane Wagg,
chair, MMF
“I’m delighted, I hope it’ll carry on long after six episodes and isn’t a false dawn. I love that new acts will get exposure alongside megastars. Plus, it’s made by Fulwell 73 and Royal Blood wrote the theme tune – gold stars all round.”

David Hawkes,
MD, commercial division,
Universal Music UK
“If it proves successful, it can have an impact on new acts and develop artists, singles and albums. It can only be seen as a positive, across the labels and the BBC, we need to make it
a success. Who knows what doors it might open...”

Derek Allen,
SVP, commercial,
Warner Music UK
“I hope it’s going to move the dial on releases. It’s another opportunity for us to get music in front of the public.There’s not that many opportunities to put acts like Liam Gallagher in front of a mainstream audience in peak season. Is Liam appropriate for X Factor or Strictly Come Dancing? Probably not. Once you cover off Graham Norton and Later... With Jools Holland, you’re running out of options. This spreads the net.”

Robin Millar,
CCO,
Chrysalis Records
“Other than Glastonbury, music on primetime TV has focused on music makers that tend not to write their own stuff, want to be seen and heard and wear the right stuff. What we haven’t had much of is self-starters - people who may not have the looks and demeanour, or who are driven by inner demons. We need more pathways to do that, to give that chance to another Kate Bush, Nico, Velvet Underground or Badly Drawn Boy. It’s our responsibility to deliver that.”

Jane Third,
global chief creative officer,
PIAS
“We’re very excited. The dream is that the show will come to mean what Top Of The Pops, The Tube and The Word meant to my generation, i.e. raw and exciting, the first place to see new artists live and unfiltered. I’m very hopeful that the curation will reflect the diversity of UK music culture for young people.”

Tasha Demi,
product manager,
Polydor
“We can’t deny the power of primetime TV! This show sounds really exciting: there aren’t very many TV opportunities for musicians these days, let alone ones to show off their personalities, too. If it can cover a range of artists at different points in their career, then it will be a job well done.”

Mahalia,
artist
“I’d love to see artists from all different categories. There’s a spotlight on grime, R&B and hip-hop at the moment, which is sick, but there’s so much more out there, like folk and alternative.”

Julie Weir,
head, Music For Nations
“The challenge will be brave programming. The presenters, though relevant, lean more towards pop and pop urban rather than indie, electronica or rock. Can we go back to breaking new and alternative talent on TV? I hope so, as this is a massive opportunity to give a substantial leg up to a new wave.”

MistaJam,
presenter,
BBC Radio 1/1Xtra
“When you look at what James Corden’s show does for music in America, this is going to be a complete game-changer. I want it to prove to the broadcast industry that music has a rightful place on TV. I hope this is going to reinvigorate things so the only place you can see music on TV isn’t Jools Holland’s show or one guest on a talk show.”

Bradley Walsh,
artist
“It’s great that the BBC is doing this. Perhaps I could host it, sing backing vocals on everyone’s tracks and then rap in the middle, too. That would really put a cat amongst the pigeons!”

Annabella Coldrick,
CEO, MMF
“The BBC is uniquely placed to deliver a primetime TV show that can balance mass appeal with risk, and introduce a new wave of musical talent. The greatest music TV programmes allowed the weird and the wonderful to gatecrash the mainstream, and I hope Sounds Like Friday Night can continue this tradition and produce some genuine must-see moments.”

Stephen Budd,
Director, Stephen Budd Management
“Sounds Like Friday Night could have a major impact on artist promotion in the UK. We all know how useful Later… With Jools Holland continues to be for a particular section of the market, but having this new outlet for a perhaps younger audience, must be welcomed with open arms and a big smile. Thanks BBC!”

James Sandom,
UK MD, Red Light Management
“I’m very pleased by the emergence of a new performance based format with contemporary music as the focus on BBC primetime, I’m sure I’m not the only one hoping the 6 episode series can establish a place in time as a longstanding fixture.”

Jamie Scott,
songwriter
“I think it needs to be eclectic, and raw. I think the performance shouldn’t just be about a record – it should be ‘this is the artist’ not just them singing their songs.”

Paul Williams,
President/chairman, ASCAP
“One of the greatest experiences I ever had in my life was the In Concert series of BBC2. It was an amazing situation where you could sit down and really connect with the audience in a way you couldn’t on American TV – [I’d like to see] that kind of respect for music."

Shaun Keaveny,
broadcaster, BBC Radio 6 Music
“There’s going to be a lot of expectation on this show’s shoulders. For so long there hasn’t been an outlet really, though Jools is fantastic. No one else has been able to come up with something decent – lord knows over the years I tried to get things going and once or twice did ask to do pilots here and there but nothing seems to catch fire. I just pray that it’s a great mouthpiece for music new and old, Jools is a brilliant beacon. I think the really new upcoming stuff like we play on 6 Music, it would be good for people like that to get on TV more. It would also be a brilliant thing if they got Shaun Keaveny to present it really, he’s just brilliant at that kind of thing.”

Zena White,
MD, Partisan Records
“We definitely need more primtetime music television. From an independent perspective, I hope the BBC can honour their role in breaking artists and actually make sure that there’s space for emerging acts, and not just ones that have come through the major label route and are being championed by the major gatekeepers. I hope they consulting with the indies too.

Kwame Kwaten,
Ownwer, KKMC
“This is good news! Many managers have sat and wondered why no there are no mainline TV new artist opportunities to showcase potential future stars, and now it looks like we have one. More power I say – we need a lot more ways to be able to mirror what we now do online with acts. TV is just one route, but what a route! It’s so important still!"