What can musicians learn from hacking culture? 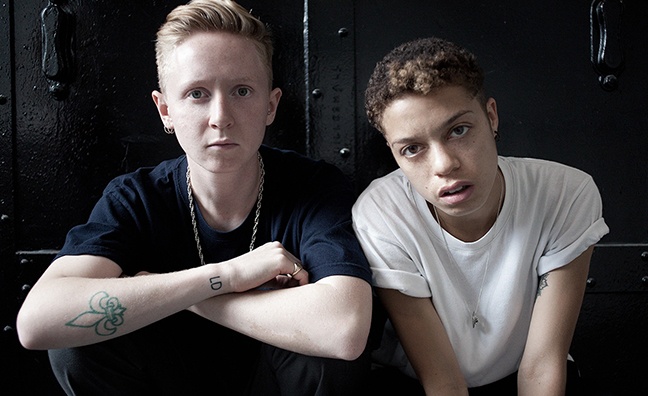 We walked into the Buzz Jam project at Red Bull Studios not entirely sure what it was going to entail or how we were going to realise our idea.

The concept was to condense the band’s entire live show down into an electronic tattoo transfer on our arm.

Although we had discussed the idea loosely with our hacker, Adam John Williams, in all honesty, hackers have a vocabulary that can make you feel like you’ve been living under a rock somewhere.

For us, it was definitely this sense of the unknown, and the almost baffling nature of the project, that really excited us.

Everything about it meant a totally new way of approaching live music.

As a band that plays live with five synths on stage, prior to Buzz Jam we felt relatively in the know
tech-wise.

However, five minutes into the weekend, we learnt that we’d not even touched the surface of how we, as musicians, can use technology to expand what we do.

The Nimmo live show is really important to who we are and designing our hacking instrument at Buzz Jam totally challenged ideas regarding our live performance set up.

As a band that doesn’t play with any backing track on stage, the idea of performing live with no instruments was strange enough.

To perform the full instrumentation with just our bodies and an electronically conductive tattoo was even stranger.

The main reason that we choose not to perform with a backing track on stage is to keep the live show exciting for us as performers, as it allows room to extend or shorten sections of the music without any restrictions.

It’s also a high-energy performance, so if Sarah isn’t on stage or able to get to her microphone in time, we have the freedom to adapt to whatever situation she might have got herself into.

Working with a hacker gave us a really exciting chance to abandon the chaos of our usual live show.

Keeping the visceral nature of our live show in mind, the conductive tattoos enabled us to become the instruments whose bodies controlled the music, as opposed to being bodies whose movement is controlled by music, i.e. when we dance.

This really fascinated us and felt like a strange-but-cool way to subvert the notion of what a live show feels like.

At the Buzz Jam event, we performed our forthcoming single, Dancing Makes Us Brave (out on October 7), via the tattoos on each of our arms.

We successfully created a temporary tattoo of the band’s logo and covered it in conductive paint.

Each letter was then connected with a line of the paint to a “bare conductive” touch board that was glued to Reva’s arm, which she could then trigger, via Ableton, by touching the letters of the tattoo.

So, effectively, Reva became the entire live show. Sarah also had a tattoo that controlled the effects on her voice as she flexed muscles on her arm, which felt like a nice way of keeping the physicality of the performance.

Although we suffered from a few minor problems during the performance, it was amazing to design a piece of equipment that is more minimal than playing the stems off a laptop, yet has the feeling and flexibility of playing live with all of our instruments.

Working with a hacker like Adam really changed the band’s outlook on using software such as Ableton live. It got us thinking about the way we use visuals and how exciting it can be for the audience when music is married with something technically and visually stimulating.

Aside from what we already knew about running music software for backing tracks etc, the experience showed that we could achieve super interesting results when combining technology within such a creative medium.

It’s definitely a strange time for musicians at the moment, as there is so much software available to replace real instruments and the extensive live set-up being in a band usually entails.

Finding new and exciting ways to use technology is definitely something invaluable for new artists.

The negative side of technology is that it can make musicians apathetic and less creative but, if properly considered, the hacking experience showed us that it is a tool to being able to create totally fresh and forward-thinking work.

A tip to other artists interested in upping their tech game would be to explore different avenues and methods of performance, even if it’s not exactly how you imagine your performance to be.

We tried the conductive tattoos and, although we know we won’t be reducing our entire live set-up to two tattoos from now on, we definitely want to explore the concept further and maybe bring it into other elements of the project.