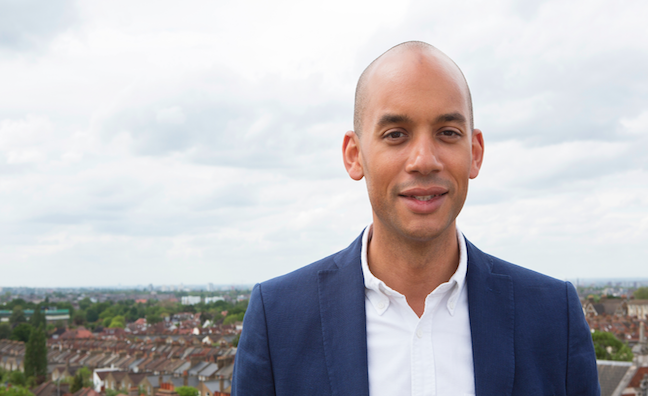 Chuka Umunna, MP for Streatham, has become an Ambassador for the PRS for Music Foundation.

The UK’s leading charitable funder of new music and talent development described Ummuna as a strong advocate and fan of the diverse new music created in the UK. It also stated that the move aligns with its aims to support talented music creators of all backgrounds and to champion their music in the UK and overseas.

Vanessa Reed, executive director of PRS for Music Foundation, said: “We’re very excited to have Chuka as an Ambassador for the Foundation. As Chuka is very supportive of the UK’s music scene and is always ready to speak out on important issues such as diversity, which are only just beginning to be fully acknowledged across the creative industries. Chuka’s involvement as an Ambassador will resonate with those who know about Chuka’s own passion for electronic music whilst helping us to champion both the creative and business impact of the diverse talent we’re funding. We’re grateful for his help and support.”

Umunna will join fellow PRS for Music Foundation Ambassadors, Emily Eavis, Amplify Dot, Imogen Heap, Ghostpoet and Judith Weir. He added: “I’m excited to become an Ambassador for the PRS for Music Foundation. Music has been such a big part of my life, and part of the fabric of our community. I went to my first gig at the Electric in Brixton to see Soul II Soul in 1991. Brixton, was the birthplace of David Bowie, the inspiration for the Clash’s “Guns of Brixton” and Eddy Grants “Electric Avenue”, and a favourite jamming spot for Jimi Hendrix. Today, the bars and cafes along Streatham High Road regularly host new artists who are trying out new material and honing their craft.

“Our community embraces our rich diversity and heritage to make it a melting pot of musical sounds and cultures from all corners of the globe. I look forward to supporting the excellent work of the PRS for Music Foundation to help support the next generation of musicians breakthrough.”

The PRS for Music Foundation has partnered with Music Week to create a new award for the year’s Women in Music 2016 event – the PRS Foundation New Artist Award.

The PRS Foundation New Artist Award will recognise the talents and achievements of a new artist who is making waves in the industry and is looking to to take their career to the next level. It aims to encourage more women to embrace a career in music, whilst celebrating the achievements of the current generation who will become the role models of the future.