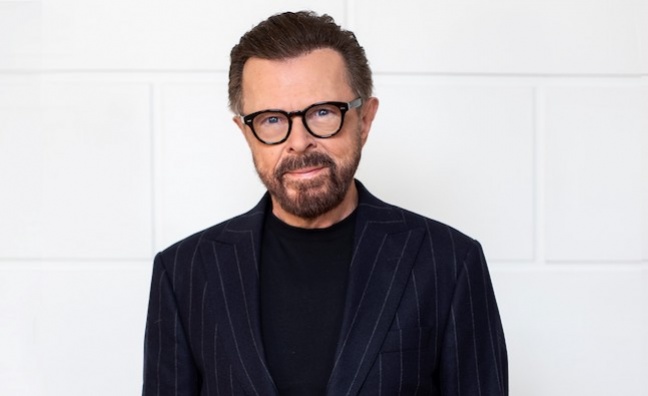 The impact of the pandemic in early 2020 was felt sharply in the live sector.

But for music publishing revenue, there was always going to be a delayed effect as the loss of public performance and live income hit distributions for members with the anticipated time lag. International revenues were no longer predictable because of the differing approaches to reopening economies and live music around the world.

PRS For Music in the UK reported a 19.7% decline in collections during 2020. That impacted distributions in the following year, which were down by 3.2% - although that was not as much as the predicted double-digit decline.

The good news is that the Covid slump in royalties for rights-holders has not become a protracted downturn. Live music has been back for the past year in Britain, while businesses who pay for music licences were protected during the pandemic and did not disappear in great numbers - although they now face serious economic challenges.

Today CISAC (International Confederation of Societies of Authors and Composers) confirms that global collections for music creators rebounded in 2021. The global network of collective management organisations has 228 member societies in 119 countries, and represents more than four million creators of music, audio-visual, drama, literature and visual arts.

CISAC confirmed that music was the only repertoire that reported increased royalties in 2021, with a growth of 7.2% to  €8.48 billion.

CISAC director general Gadi Oron said: “After the 10% fall [across all repertoire] experienced in 2020, our societies’ return to growth last year is an impressive achievement. Bearing in mind that income from live concerts and public venues was largely non-existent, the acceleration of digital licensing by many of our members to offset the decline in other areas is a real success story. The recovery is only half done, though. There is, without a doubt, much more room for growth, and to achieve that, we need to bring more value to creative works in the digital market and promote a fairer ecosystem for creators.”

CISAC president Bjorn Ulvaeus (pictured) said: “Digital royalties collected by CISAC societies are growing impressively, but the streaming world is still unfinished business when it comes to ensuring a fair environment to earn a living. Too much of the data needed to identify and remunerate creators is incomplete or missing when works are ingested on streaming services. The result is a lot of money that is left on the table when it should be going into creators’ pockets.”

The UK was the star performer in the Top 10 collecting countries for music with year-on-year growth of 33.1% to €813m. Half of the Top 10 territories have not returned to pre-pandemic collection levels.

The results coincided with PRS For Music’s record quarterly distribution figure of £211 million this month - up 18% on the prior year quarter, with live and public performance royalties up 210%. However, the UK still has some catching up to do: annual public performance collections (including for live music) in 2021 were down 38.1% compared to 2019.

The UK was fourth overall in royalty collections during 2021 (compared to third in the IFPI’s international recorded music market figures). The US was in first place at just over €2bn in collections (23.6% of the global total), followed by France and Japan, narrowly ahead of the UK.

The UK is also in fourth place when total collections are measured as a percentage of GDP, although it is ninth when collections are calculated on a per capita basis (with the US way down in 21st place). 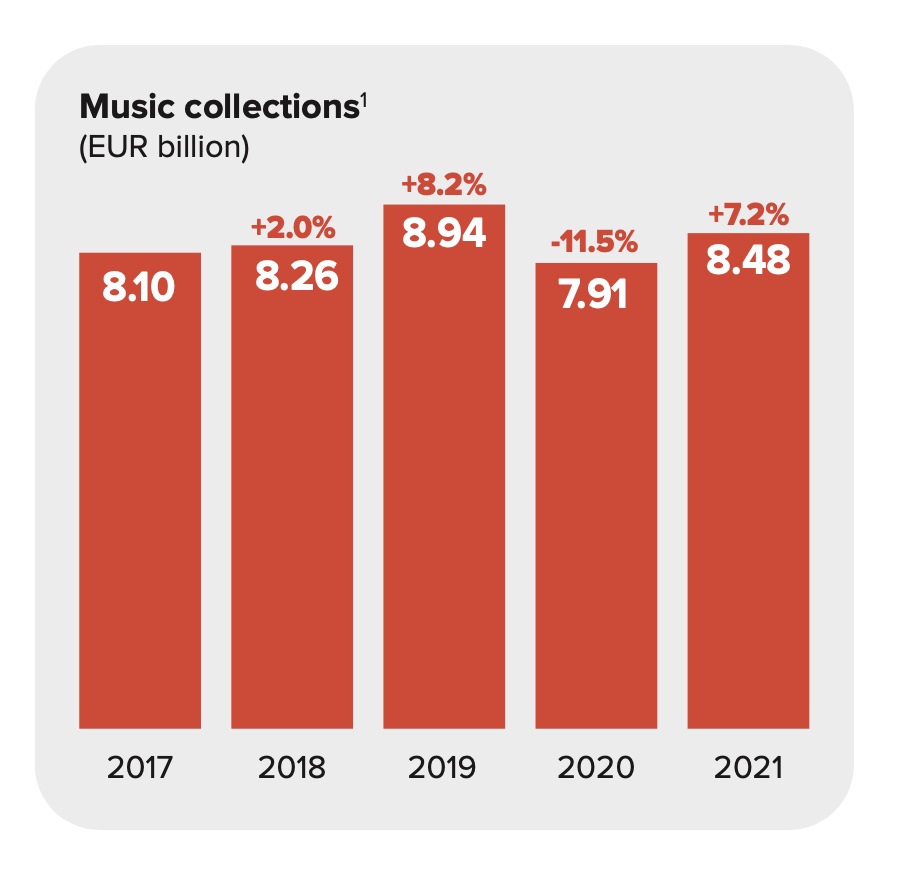 So are global royalty collections back on track?

By far the largest source of growth for music was from digital, which for the first time exceeded €3bn globally (€3.06bn). Digital income growth of 27.5% was almost double the previous year, with digital collections rising 48.2% above the pre-pandemic level. It now makes up 36.1% of global music revenue.

Digital is now the primary source of music creators’ income in more than 29 countries (including the UK), helped by a subscriber growth, a widening choice of platforms and new licensing deals, in particular with TikTok and YouTube.

Earnings from TV and radio remain the largest income source globally (€3.19bn), although that looks like being on borrowed time. Its share difference over digital, in second place, has narrowed from 10.8% in 2020 to just 1.6% in 2021.

Global broadcast collections fell by 1.8%, with weaker advertising rates in some markets translating into lower revenues. Digital is also substituting for broadcast income, although there was notable growth in some countries.

The balance between music creators’ top three income streams has dramatically shifted with the global shift to digital consumption.

Total live and public performance royalties were flat at €1.49bn in 2021, following a 45.2% decline the previous year. The two-year slump reversed more than a decade of sustained growth.

Strong growth is expected for 2022 in many markets, though some societies still believe a full recovery won’t be possible before 2023.

A breakdown of the numbers shows the marked disparity in live income compared to public performance. Data from around two-thirds of CISAC members shows that while background music recovered 17% in 2021 (following a 39.9% fall in 2020), live music royalties remained in freefall. Live income shrank by 29.4% in 2021 following a 61.1% fall the previous year. This left income from concerts and festivals in 2021 down a staggering 73% on the 2019 level. 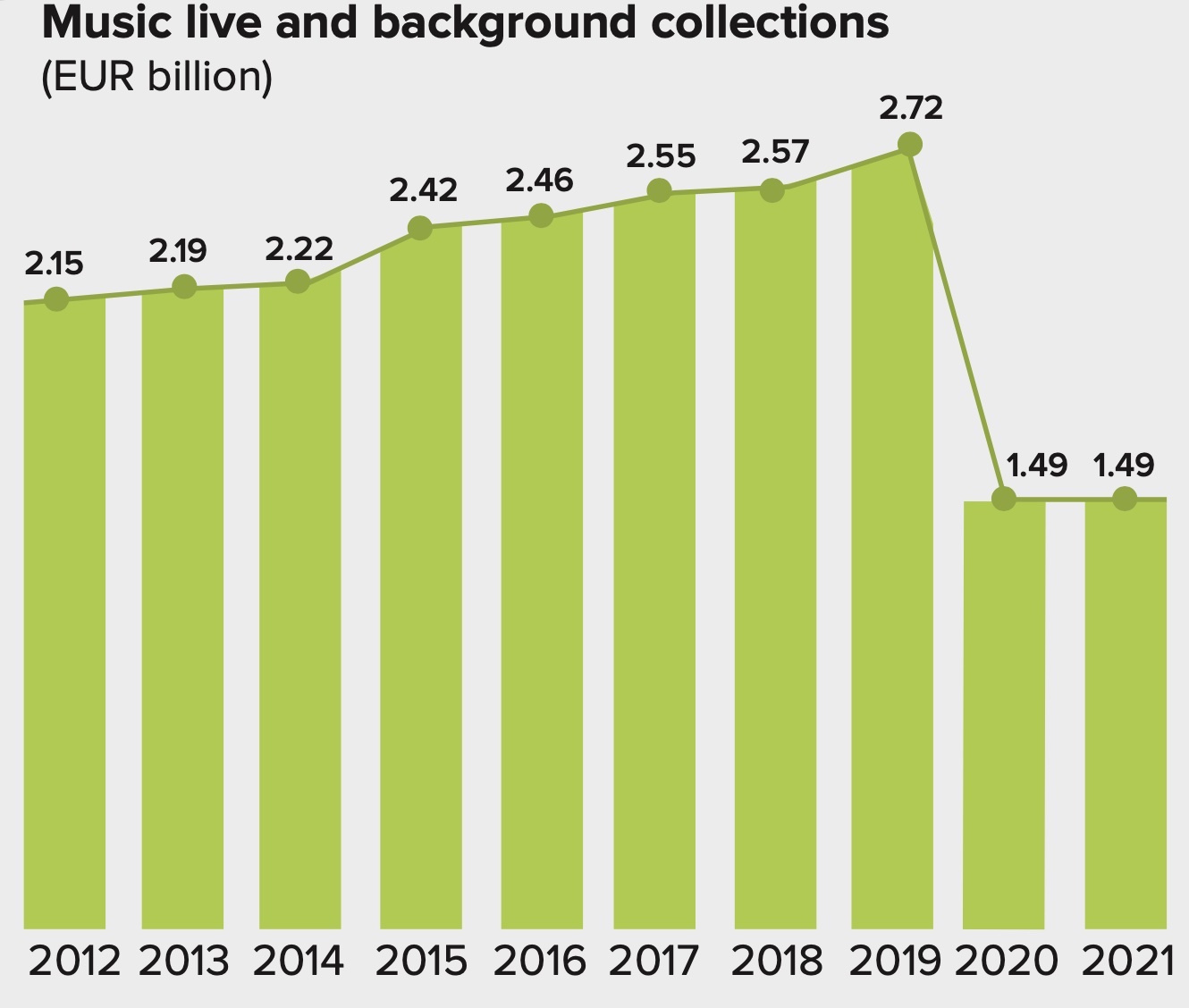 The route back to pre-pandemic levels has varied across the world, affected by variations in government measures. Territories such as Brazil, Poland and Australia remain well down on pre-Covid levels. By contrast, the UK and USA saw significant growth in 2021 and added almost €90m to the sector as public performance income benefited from reopening businesses.

The UK was by far the fastest growing country for live and public performance with collections recovering 65.2%, but remaining one-third below the pre-pandemic total. PRS For Music reported an optimistic outlook for 2022 with over 240 major tours already planned throughout the UK and beyond.

On a global basis, CISAC highlighted the “disastrous impact” of the two-year lockdown on live and public performance income across all members’ repertoire.

The lifting of Covid restrictions in most countries by the second quarter of 2022 triggered a surge in sold-out live events and festivals. Globally, Live Nation reported a strong start to 2022, with income up 52% in the first quarter, and confirming that events were “back on the road and fan demand has never been stronger, a reflection that live events remain a clear priority for consumers as our social lives restart”.

But CISAC’s report sounded a note of caution.

“Looking ahead, it may take until 2023 or even 2024 for live royalties to recover their pre-pandemic level,” stated the report. “Several factors underlie this slow recovery, including the permanent collapse of some businesses during the pandemic; the sluggish return of small-scale events featuring local artists in some countries; and initial delays in the return of world tours for the big stadium-filling acts.”

Other music income CISAC tracks globally includes ‘CD & Video’, which covers mechanical revenue from physical formats including compact disc and vinyl (€359m - up 3.1%); and Private Copying based on levies on blank media in European territories (€286m - down 15.3%).

The organisation underlined the potential for further digital growth but stressed the “urgent need” for action to unlock more value for creators in the streaming market.

There have been concerns about the vulnerability of audiovisual and music streaming subscriptions to any economic downturn, as well as the issue of unchanged prices for DSPs for well over a decade.

Marcelo Castello Branco, chair of the CISAC board, noted that music subscription prices are “already undervalued and need to be raised, with prices having barely changed since the early days of the streaming model”.

“Fair value and fair terms are essential so as not to compromise the remuneration of rights-holders,” he added.

Björn Ulvaeus, president of CISAC, stressed the role of improved metadata for maintaining growth in collections. The ABBA member and songwriter launched the Credits Due campaign last year.

“On the music side, CISAC has done a fantastic job upgrading the music works identifier ISWC and making it available to societies,” he said. “But despite this, wider adoption of the newly-improved code is slow. It is essential that the different parties involved—societies, publishers, labels, DSPs, tech companies, managers and of course creators themselves—now work in collaboration to fix the problem.”