Kim Frankiewicz on the rise of Concord: 'A boutique publishing company with muscle' 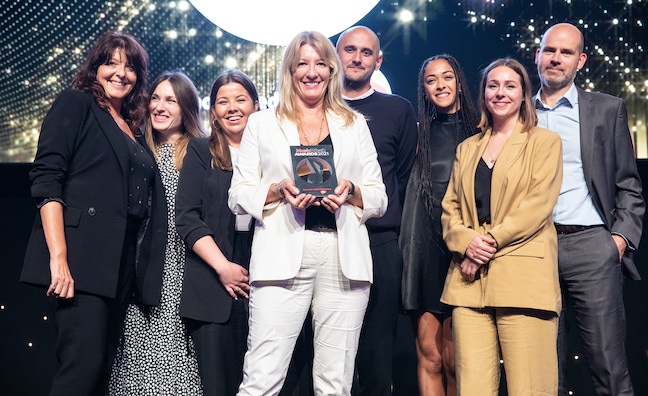 The award reflects success in 2020, a year in which the company acquired the Imagine Dragons catalogue. Concord has also invested in Pulse Music Group to form a JV, as part of its commitment to develop frontline pop hits.

“We like to think of ourselves as a boutique publishing company with muscle, and quality, not quantity,” explained Frankiewicz.

Of course, the company is now much bigger than a year ago following the acquisition of 145,000 copyrights from Downtown.

Concord is heading for the fifth anniversary of its formation as a burgeoning indie publishing powerhouse, following the Imagem Music acquisition in 2017 (where Frankiewicz worked prior to the deal).

Asked about the victory at the Music Week Awards, Kim Frankiewicz said: “It’s fantastic, it’s been a lot of years of blood, sweat and tears and hard work from the whole team to get here, so we’re all very chuffed. Everybody is great and I feel very blessed that we’ve won in this category.

“But there’s not one thing that I could point out as to why we won. We’ve been very proud of our songwriters, especially during Covid, to have continued working, to adapt and do the Zoom songwriting. I’m proud of all of them.”

As for the return of the ceremony after more than two years, she described the awards as “the first big one back for me, it was really lovely because we were all so happy to see each other - people were running across the room to see each other”.

We like to think of ourselves as a boutique publishing company with muscle, and quality, not quantity

“It’s always about finding the next songwriter or artist to work with, that’s what we’re always on the lookout for,” said Frankiewicz.

Concord’s A&R team worked closely with the curated roster of songwriters/artists throughout the pandemic.

“We were very fortunate,” said Frankiewicz. “I felt blessed to be a publisher because songwriters could still work, music was still being released, people were listening to music, labels were still getting it out there, so we were one of the parts of the business that wasn't affected like other parts.”

Nevertheless, the publisher and its roster of songwriters had to work around the restrictions.

“We put a lot of effort into the writers,” said Frankiewicz. “Some couldn’t adapt to the situation of not being in the studio with people, but others just took to it like ducks to water. But then the ones that weren't feeling it eventually got it, we had to very much nurture them through it and be supportive and help guide them around it.”

Concord’s A&R chief acknowledged that the pandemic has changed songwriting for good.

“What came out of it was, with the Zoom writing, a lot of writers have said, ‘Well I don’t have to get on a plane and go to LA all the time, I’ve made contacts through Zoom, I know how to do it and that might be the better way,’” said  Frankiewicz. “They will still want to travel, but I don’t think there will be as much.”