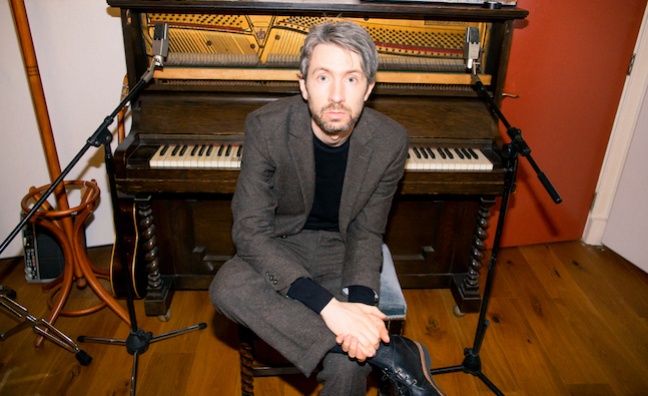 At the beginning of the year, we reported on a big deal for hit songwriter and producer Rick Boardman.

A former member of Delphic and founder of songwriting collective The Six, Boardman has teamed with Will Gresford and Holly Lintell of TripTik Management to launch Manchester-based label, publishing company and management firm Matter Music.

“We’ve had a really great start to this year already,” said Boardman.

Upcoming releases include You by Tate McRae x Troye Sivan x Regard, which is co-written by Matter Music songwriter Sakima. The company is also developing production duo The Nocturns.

Here, Rick Boardman opens up about the big plans for Matter Music…

What are the ambitions for Matter Music, what kind of roster do you want to build?

“We built Matter around a small but talented roster. It was important in terms of the development that we could maintain a very hands-on approach and so chose not to take on too many people. We were all working out of a Georgian coach house in Manchester and it has always been like a family in that respect – spending lots of time together, everyone learning from each other, pushing each other etc. We have since expanded and have writers and artists all across the country, and even the globe. But we still maintain that original ethos and treat it like a family, often coming together at Matter Studios in Manchester to spend time together and make tunes as a team.

“We always felt we could offer something different in terms of our development process. Everyone has been ‘brought up’ in an environment where they want to help each other, learn from each other, regardless of how many or how few cuts they have had and it can even be seen as a bit like a school, where people learn their craft and how to get from being a bedroom songwriter to flourishing in the industry, making records with successful artists. Going forwards, we’re continuing to develop and work our fantastic roster, but we’re always on the lookout for creatively inspired and driven people who are up for sharing our ethos and joining a family!”

Can your writers have a global reach with streaming? Are there international co-writing opportunities?

“Yes, absolutely. Streaming has been a really important part of the picture and has really helped amplify our writers’ work around the world. We’ve always encouraged and enjoyed international co-writing, whether it’s with people visiting UK or our crew heading off on a writing trip. Obviously right now it’s hard to collaborate internationally in the room, but we’ve found with everyone working virtually, there have been more international collaborations than ever before and it’s really exciting. Our team are on Zoom sessions with writers from all over the world, including USA, Australia, Germany, Italy Sweden and Israel. It can be costly for a new writer to go on a writing trip – taking into account travel, accommodation and sometimes studio costs etc. People wouldn’t have dreamed of writing virtually before all this, so writers would have to spend a lot to go out and work with new hot teams in LA. But now they have no choice, so everyone’s accepting it as a new way of life and I think it will be something that sticks around. It’s all about finding people you love working with, wherever they are and making the best music possible.”

Will you look to represent Manchester's music scene on the roster?

“Definitely! We still have one of our main bases up in Manchester – the aforementioned Georgian coach house, which has 13 rooms including four studios and accommodation for people to stay there. We have four creatives living in the studio at the moment during lockdown, just writing tunes every day. I always felt the industry was very London-centric and I wanted to make a gateway for talented people, who might be from a small town somewhere and are not quite sure how to get into the London scene. There is a wealth of talent up North, some great music courses and universities, fantastic artists. No one should feel like they have less of an opportunity because they were born outside of London. So I think it’s refreshing to have something set up in a different place, and will attract a different sorts of people. I have a lot of civic pride, and Manchester has of course done great things for culture over the years, and I strive to keep that going.”

What does Victoria Becks bring to the operation as the new head of A&R? Are you planning further staffing expansion?

“As our roster grew we felt it was important extend our A&R team too, and we were very fortunate in hiring Victoria Becks. Victoria is a fantastic addition to Matter Music with a wealth of experience across artist and writer management, records and publishing and has been part of a number of successful projects and campaigns over the past few years. She’s incredibly passionate about songwriting and takes the same very hands-on approach that we do. She has immediately elevated the publishing company and is already adding her vision and skills across the different projects within Matter. In terms of further staffing expansion, we definitely have this in mind and plan to continue building across these next few years. We want to make sure we can build in the right way – steadily and keeping true to our values and approach.”

Manchester has of course done great things for culture over the years, and I strive to keep that going

What are your hopes for songwriters/producers The Nocturns and Sakima in 2021?

“The Nocturns have already built up a string of exciting releases out later this year. They’ve been working with Tom Walker on his next album, writing with James Bay and S1mba and they’re continuing their great relationship with artists such as Declan J Donovan and Sody. With Sakima, he’s really hit his stride and is on fire right now. In the coming weeks, we’ll be able to announce a few big releases that he’s co-written including one that in his words ‘is a bucket list cut’. He’s working with the likes of MNEK, S1mba, Morgan, 220 Kid and Claudia Valentina on new music. There’s a wicked energy across the whole roster right now. It’s been a tough time but everyone’s pulled together in the team, they are all in a really positive mindset and place with their creativity and careers.”

How has co-writing continued in the pandemic? Will it influence the style of music and increase demand for more uplifting songs?

“As I mentioned earlier, a lot of writing has now turned to Zoom, which of course has its advantages and disadvantages. It can be quite intense and you do miss the connection of being in the room with someone but considering the circumstances I think it’s a great thing to come from a bad situation and will continue to provide a lot of co-writing opportunities going forward. It seems like the world wants funny TV programmes, good news and uplifting music right now, otherwise it’s all a bit depressing and there’s a need to keep our spirits up! We are all aware of that and not just from a cynical marketing point of view, but also from a personal point of view, it’s what we actually want to be making. It can all feel quite claustrophobic during lockdown, so why would I want to make dark, tense music that embodies that negative feeling? For me anyway, it makes me want to make euphoric music with a big release that I can imagine being played at a festival - in direct contrast to what is going on - that feels way more inspiring!”

How is the label developing?

“The label is the newest arm to Matter and something we’re really digging into this year. We’ll be putting a focus on signing and developing a few projects across the next six to 12 months and bringing our team's songwriting experience to the table, which we feel is a unique selling point for a new artist.”

What projects are you and The Six working on?

“We are taking this time to develop some of our own projects and artists – it felt like the perfect opportunity to hide away and just make great music for the right reasons. Alongside that we are doing our normal song pitching – trying to write the most interesting song or the biggest chorus we can write and then find a home for it – and we have had a lot of success doing that in the past. Just writing what we think should be on the radio, and we usually find if we get it right then it will find a home. Also, we’re still working on some ongoing projects with a selection of great artists like Bebe Rexha, Tate McRae, Griff, Tom Walker, Troye Sivan, Tom Gregory, Goody Grace and some new artists we love like EYK, Mathilda Homer and Noisy. Everyone’s been working so hard, so I’m really proud of everyone and excited to see what else 2021 brings.”