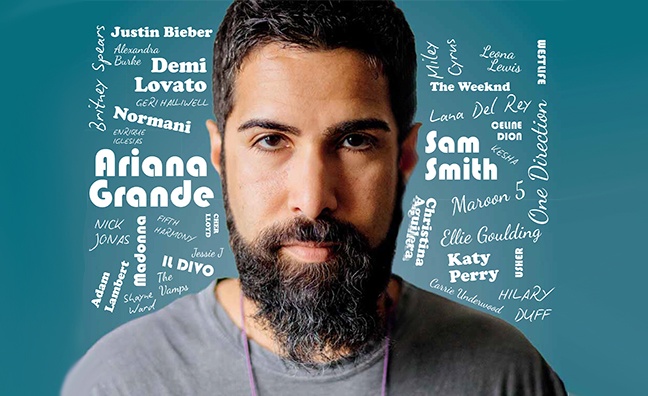 In the huge new double issue of Music Week we take an in-depth look back at 2019, revisiting all the highs and lows along the way.

As part of the celebrations, we have crowned Lewis Capaldi our Artist Of The Year, while Mabel has claimed our Breakthrough Artist honour. But there is another crucial title we hand out every year, and one every bit as important: Songwriter Of The Year.

For anyone unfamiliar, he’s a quick snapshot of his vast catalogue of hits: The Weeknd’s Can’t Feel My Face? That’s him. One Direction’s That’s What Makes You Beautiful? That’s him, too. Cool For The Summer by Demi Lovato? Yep. If U Seek Amy by Britney Spears? Bingo. Ellie Goulding’s Love Me Like You Do? Check. Justin Bieber’s Beauty And A Beat? Affirmative. Maroon 5’s One More Night. Guess who, folks! Not only is this list but a fraction of his output, it also omits his biggest recent calling card: Ariana Grande.

Over the years, Kotecha’s had an astounding run of singles with Ariana Grande, one which stretches from early hits like Problem and Break Free via Into You and Side To Side through to her recent era. Not only did Kotecha write a host of hits on 2018’s Sweetener that continued to dominate airwaves in 2019 (No Tears Left To Cry, Everytime, God Is A Woman, Breathin’), he also scored two credits on her Thank U, Next album (Bloodline, Ghostin’) and co-wrote her UK No.1 single Break Up With Your Girlfriend, I’m Bored (672,875 – OCC). Oh, and songs on the Charlie’s Angels soundtrack, including Grande, Miley Cyrus and Lana Del Rey’s UK No.2 superstar collaboration Don’t Call Me Angel (195,763 – OCC) and Bad To You (feat. Grande, Nicki Minaj and Normani).

On top of this, Kotecha also worked with Sam Smith for the first time this year on How Do You Sleep? (502,221 sales – OCC) and also helped Normani deliver her breakout solo hit Motivation (202,492 – OCC).

In our interview we discuss his remarkable journey from boyband hopeful to his education at the Cheiron [Studios], working with Max Martin and birthing One Direction. Throughout, he outlines his attitude towards co-writers, the vision behind his own boutique publishing company S2 Songs, and why the industry still has a long, long way to go before songwriters get the recognition they deserve…

Here, in an unread extract of our interview with our Songwriter Of The Year, Kotecha opens up about his working relationship with Ariana Grande and why, contrary to what you may have heard, the biggest hits don't always come easy…

Why do you and Ariana gel so well in the studio?

“I think we play to each other's strengths. I'm very structured and I almost overthink or so much when it comes to the melody and Ariana knows when that’s happening and she’ll snap me out of it, like, ‘No, it's great!’ I think we complement each other, writing-wise. In the early days, even when she wasn't necessarily the main writer on songs, she gave me ideas, and also when you have a voice like that you can do so many things. She always wants to try stuff.”

Does that make it easier or harder for you as a songwriter when you've got a voice that's capable of that much?

“You would think it makes it harder, but it actually makes it easier, especially when you have an artist who is so brave and willing to do different things. When it was time to do Break Free and do a dance song, she was super down. Obviously, her R&B space is where she's most comfortable, but she's still willing to get out of her comfort zone and try things. And I think even with her writing, to be that vulnerable and honest in a song is awesome.”

You’ve always seemed quite keen to stress the amount of work that goes into writing one amazing hit song, which is quite different from a lot of songwriters who often say their hits ‘came together in 10 minutes and it was done!’…

“I have a little bit of a stance where I’ve heard people say that and it makes the public think it's an easy thing because, yeah, sometimes it happens fast. But I think to constantly, consistently repeat [making hits] is about craft. There’s just different ways of looking at it. No one is right or wrong. I'm just a professional personality type where I'm like, ‘I can't let it go!’ As long as the chorus is good, I think that's the diamond in the rough. That's what you're looking for. And if it takes two weeks, three weeks to fix the rest of it, to make that core shine, I have the personality type where I'm willing to go there and fight for it. And so I rewrite and rewrite and rewrite, take a break, look at it again, rewrite. And, for me, that's what's worked over the span of 15-16 years.”

So what song has taken you the longest? Did any of them have particularly long gestation periods?

“For Break Free, me and Max [Martin] kept re-approaching it a lot of times, it wasn’t until Ari came that we got it to click. I spent two weeks on the pre-chrous of Side To Side – we couldn’t get it right. And then a songwriter, a wonderful person called Alexander Kronlund, comes in, we show him what we tried and he goes, ‘Why don’t you just do it like this?’ and walks out of the room and it was like, ‘You mother fucker!’ [Laughs] Of course, his solution came after showing him what we tried, but there's tons of that. God Is A Woman was rewritten and rewritten. We had the chorus, that always stayed the same, but the pre-chorus was rewritten, rewritten, rewritten, rewritten so many times. And sometimes it takes a magic artist to come in. Ari came in, heard the chorus and said, ‘I know exactly what to do’ and it became God Is A Woman. No Tears Left To Cry, we spent like four or five days trying to find the right pre-chorus melody. Those are some current songs that pop into my head. For us, it doesn't happen that fast. Sometimes it does, Breakup With Your Girlfriend came together pretty quick, it was like one or two days. But it’s different for everyone so I don’t want anyone to think I’m saying ‘I’m right’.”