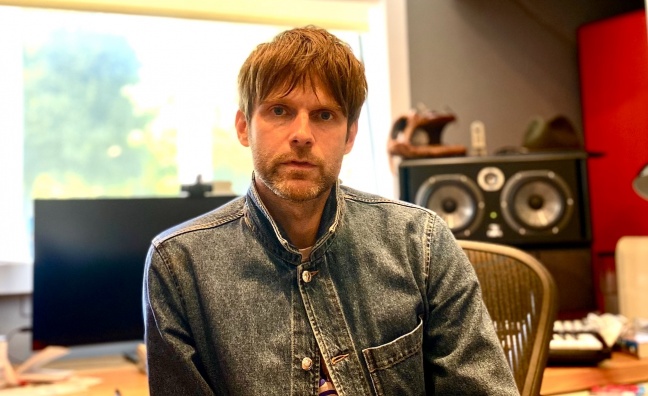 Nick Hodgson has told Music Week of his plans to nurture a new wave of emerging talent, as his Prediction Music publishing company launches its first signing.

After leaving Kaiser Chiefs in 2012 to concentrate on his solo music, songwriting and production, he started Prediction Music as a vehicle for his own compositions.

“I called it Prediction Music as it related to I Predict A Riot, which was the song that triggered everything for me and the band,” he told Music Week. “ I initially just wanted to own my own songs and have someone admin it, but as time went on I wanted to expand to include other writers and artists.”

Hodgson plans to expand his offering to include management and records in the future but, he says, for now, he will focus on publishing.

“Publishing makes a lot of sense to me right now because it's all about songs, which are at the heart of everything and as a songwriter it's something I really understand,” he said.

Prediction Music is supported by Universal Music Publishing Group UK and the company’s MD Mike McCormack has told Music Week he is excited by the prospect of working alongside Hodgson.

“Our approach to A&R has always been relatively simple, if you back great people with great instincts, then amazing things can happen,” said McCormack. “Nick has already proven himself as a big hit songwriter and now as an excellent talent spotter with Martha. We provide the creative support and infrastructure so Nick can focus on the music. Martha is a talented and wonderful first signing and I am confident this will be a long and successful partnership.”

Like Hodgson, Martha Jean is from Yorkshire, and is now studying at BIMM in London, where she has recently started playing gigs. The drummer plans to work with artists and writers right at the beginning of their careers and said that he believes his company can be a key vehicle for breaking UK talent. He sat down with Music Week to dig deeper into his plans for Prediction Music and talk about the best ways of finding and developing new acts…

Firstly, how did the partnership with UMPG come about?
“Dougie Bruce [senior A&R director] reached out after hearing a song from my solo album which he liked. I hadn't spoken to him for a while, but I’d known him and Mike since before the band and they seemed like the perfect people to partner with for my own publishing and to work with on new signings. There’s a fantastic team there too, across A&R, sync, marketing and admin.”

Your first signing is Martha Jean, what drew you to her? And how much other good new music have you come across recently?
“I spent most of lockdown really digging for new stuff and most of that was through BBC Introducing. I discovered Yard Act through BBC Leeds as well as a band called Priestgate from East Yorkshire, a band called English Teacher, one called Anorak Patch and Wax Works, who Simon [Rix] from Kaiser Chiefs manages. I was looking for a combination of projects to write and produce with, but with the long-term goal of finding someone to sign to Prediction and get the ball rolling. I heard Martha last summer when her song came on Introducing West Yorkshire, I was totally struck by her voice and her lyrics. I think the new music landscape is very good. The recent success of Wet Leg and Yard Act shows that bands with good songs can still take over the world, or at least a small corner of it. There’s more new music than ever before because of how easy it is to release your own stuff, so I think Introducing is more important than ever because they are the first filter."

Martha has an EP on the way too, what can we expect from it?
“Martha has played her songs to various people and at least a couple of them have cried when listening to In Love Without A Lover! There’s something about her voice and the way she delivers the lyrics that seems to have a huge effect on people so I’m really excited for it coming out to see people’s reactions and hopefully they’ll love it as much as I do.”

What are you looking for in your new signings? And how big do you envisage the roster being?
“I’m looking for people who surprise me with their writing, something that jumps out. With Martha it was the song, Was That My Coming Of Age. Even the title caught my attention, the dissatisfaction with her coming of age moment put so succinctly really got me. It’s hard to find new angles in songwriting, so anything that can tell a story in a new way is great. I don’t know if the roster will be big, but I’ll definitely be signing more people,  there’s no rush though. It really depends on who I discover and if I can offer them the right deal. It’s important for me to find artists and writers who are right at the beginning of their journey, so I’ll keep searching all the time.”

Finally, how will you use your expertise and experience to help guide the artists and writers you sign?
“I think the experiences I had with the band at the height of our success were so extreme in terms of pressure, being in demand and generally handling the madness that there’s usually something to draw upon when helping young artists. In terms of writing, I can help as much or as little as people want, I’m always there to offer advice on songs and also to co-write and produce. Someone who has just started writing might need help with the mechanics of a song, the technical things that make a song work over three minutes. I’m definitely looking for writers who inspire me and bring something completely new to the table – that makes my job easier!”