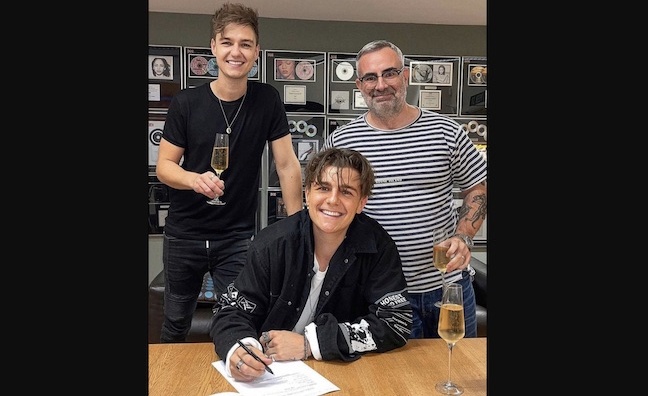 Kid Rain has amassed 10 million streams for his single Accidentally In Love. It has 250 million views and 400,000 shares on TikTok, and hit No.25 on the Spotify Viral Chart UK and No.30 on the Apple Music chart UK.

The songwriter/producer wrote his most recent single Magic alongside Grammy-nominated Mitch Jones (who has written for Ed Sheeran). It was mixed by Jay Reynolds, who won a Grammy earlier this year for his mixing on Dua Lipa’s Boys Will Be Boys.

Kid Rain followed the release of Magic with four arena dates in Blackpool as part of Nickelodeon’s Slimefest, and he is currently preparing for his debut headline show at London’s Powerhaus on November 25.

“What Dan Reynard has already accomplished on his own is exceptional,” said Nigel Elderton, president, Europe and managing director of Peermusic UK. “There’s a reason that Dan has made such an impact – he’s got that special ability that make people take notice, vision, and a loyal audience. Our goal is to leverage our worldwide Peermusic network to help amplify what he’s already creating. We’re excited to be a part of this next chapter in his journey as a songwriter/producer.”

Head of A&R at Peermusic UK, Mike Sault, said: “Dan Reynard aka Kid Rain is a special songwriter and artist…and this has been highlighted by the huge growth in his fan base over the last year, which even in a normal year, would have been an impressive feat, but to do it with all the restrictions in place, is a little short of extraordinary. He is the real deal, with a huge future ahead, and so we are very proud that he has chosen Peermusic UK to be part of his incredible team.”

Kid Rain said: “I’m so excited to be a part of the Peermusic family. I knew I wanted to sign with Nigel, Mike and the Peermusic team, because of their personal commitment to supporting my vision as a songwriter/producer. They have close relationships with their writers that will be invaluable but with the worldwide resources and network of a large-scale music publishing company.”