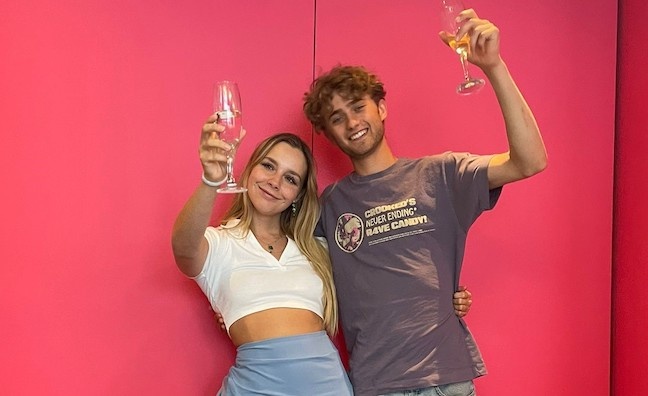 The pair's first single Soft Spot became a viral hit on TikTok and has now amassed more than 12 million streams on Spotify. The pair met while Piri was at University in Manchester. After getting locked down in the same student house during the pandemic, they started writing songs together.

Piri said: “We’re so excited to be signing major publishing deals, it feels like a significant step in our career. Amber [Davis] and Darryl [Parkinson] at Chappell were the first people in publishing we spoke to and we felt like they got our vision for our songwriting from the start."

Tommy added: “I’m so pleased to be working with Tim & Danny and the team at Chappell, and we’re already to talking to them about teaming up with some of the other writers they work with and creating some hits!”

Darryl Parkinson, senior A&R manager, Warner Chappell Music UK, said: “We’re delighted to be able to partner with Piri & Tommy so early in their careers. They’ve created a really great buzz around themselves and have the songs to back it up. We’re looking forward to helping them develop their sound further, as well as setting them up in some exciting sessions.”

Marissa Rodney, A&R at Tim & Danny Music, concluded: “Piri & Tommy are the future stars of dance pop – they bring a fresh spin on things that we are very excited about here at T&D Music/Stellar Songs. We are looking forward to being an integral part of their journey alongside the team at Warner Chappell Music.”

Piri & Tommy recently signed a record deal with Polydor and are currently working on their first long-form project.