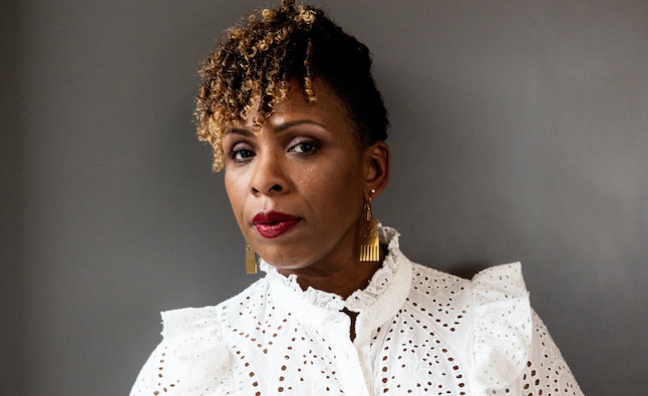 It’s been a busy first year in post for Michelle Escoffery.

The new position of president was introduced at last year’s PRS Annual General Meeting in August after a review of the organisation's governance. Escoffery was previously a writer director on the PRS Members’ Council.

In the latest issue of Music Week, Michelle Escoffery reflects on her first year in the post, including big issues including streaming royalties, the needs of members as the country emerges from the pandemic, ageism and diversity.

Escoffery said the PRS Members’ Council (previously PRS board) election results showed that more needs to be done on diversity in terms of PRS’ governance.

“I personally was disappointed at the AGM last year,” she told Music Week. “We had our most diverse group of candidates, but apart from another woman getting on, it wasn’t necessarily diverse.

“But I’ve been really impressed with the staff at PRS and how committed and engaged they are in terms of diversity and inclusion, and wanting it across the board – not just ethnicity but also neurodiversity and people with disabilities.”

The election results were surprising considering the calibre of candidates from diverse backgrounds.

We had our most diverse group of candidates, but apart from another woman getting on the board, it wasn’t diverse

Escoffery recalled how she entered a huge row on livestream licensing for smaller venues when she started.

“It was my first week,” she said. “I had to look at it from the perspective of songwriters, try to understand it from that perspective first, and then look out to the bigger picture.

“There were things that we needed to listen more on, which we then did. So in one sense, it was a good exercise because it helps the dialogue to be a little bit more open.”

Escoffery has taken on the role at a time when Covid has affected global performance royalty collections, particularly because of the lack of live activity. The collection society has already warned that its distribution to members based on 2021 revenues is set to decline by 10%.

“Our distributions haven't dipped [so far], which has been great,” she said. “But what we're also very conscious of is the changing landscape. So we're having to stay agile and just react to the market and what's going on.

“Obviously there's a backlog [of acts wanting to tour], so in terms of new artists, that's going to be challenging and frustrating.”

Michelle Escoffery praised the efforts of publisher members during the pandemic, at a time when big players are buying up songwriting assets.

“There's an element of a squeeze, but there's also the element of innovation,” she said. “I think that what the last 18 months has shown us is that we have the ability to innovate, and we have to do things differently. So a lot of smaller companies are more agile, they are thinking out of the box and doing things in a different way. And that's been really positive.”

As a songwriter herself, Escoffery also gave her take on the growing trend for music creators to sell their writer’s share in a catalogue.

“It depends at what stage of your career you're at, really, and what the benefit is,” she said. “I think it's a very personal decision to make. If it's something that's going to keep you going for another 10 years, then you can see why people would want to sell their catalogue.”

In her Music Week magazine Q&A, Escoffery identified “connection and community” as top of the agenda for members. Data is also an issue in the songwriting sector.

“Some members have asked for very granular detail,” she said. “With our digital programme we are working on that and rolling some stuff out this year. When I came on to the [PRS] board, one of the things for me was that we should be able to see everything on our phone in the palm of our hand. That's what we've been working towards, simplifying the website and making it more interactive, easier to navigate and updating all our systems to make them more [accessible]. So we will have faster, more nimble systems - I'm quite excited about that.”

Another big development for PRS For Music is its new HQ in London Bridge, following the move from King’s Cross.

“Everybody, eventually, will be in the same place, so the Streatham office will be with the London Bridge office, which is great,” said Escoffery.

“It's very eco-friendly and technologically savvy,” she added. “Andrea is very proud that 60% of the stuff from the King's Cross office came over to [London Bridge], so we’re very aware of helping the environment and not just getting rid of things. It feels really good in there.”