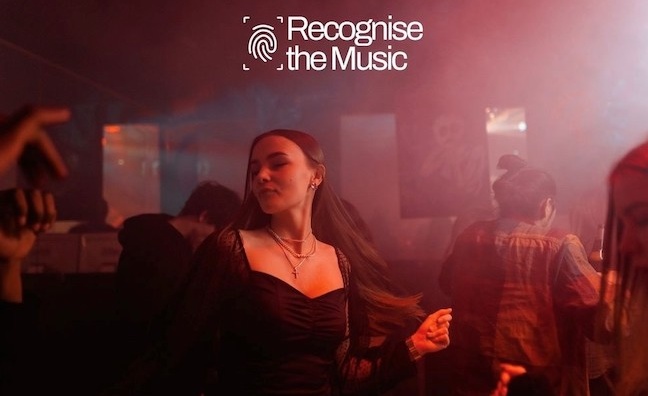 A global initiative has launched to drive more accurate royalty payments for artists and songwriters from public performance.

Recognise the Music also aims to remove the manual effort for venues and premises, following years of time-consuming manual reporting.

It is described as the first step in helping venues and premises across the UK check that their performing rights organisation licence fees are being distributed to artists and songwriters with the highest level of accuracy.

Unidentifiable and inaccurate royalty payments is one of the music industry’s biggest challenges. Audoo estimates that over £2 billion in global revenue cannot be properly tracked. It results in many songwriters, composers and publishers missing out due to lack of accurate data collection methods and technology, relying instead on estimations and radio plays.

In the UK alone, there are around 400,000 venues already holding a performing rights organisation licence, indicating the scale of the initiative’s potential impact.

Selected early adopters will be some of the first to receive an Audio Meter, developed by Audoo, which is fitted with a discrete plug that easily slots into a standard electrical socket. It recognises what music is playing and securely fingerprints it, with no audio ever being stored or sent from the device.

Venues and premises across the UK are being encouraged to sign up at recognisethemusic.com.

Mark Davyd, CEO of Music Venue Trust, said: “When I walk into a club or a bar and I know they have a blanket licence and I know that no one has any idea what’s being played, it’s quite irritating for me on a personal level to hear a band that I really like being played and not being recognised.

Gee Davy, COO of Association of Independent Music, said: “For all of our members it’s absolutely vital that the data flows through correctly, that the right people are recognised for the music that is played publicly so that the right artists are paid at the end of the day.”

“There is a lot of data out there in the world. It’s really useful for artists and everyone that works with them; their labels, distributors, managers. [It’s important] for them to be able to see that their efforts are paying off.”

This helps the industry across the board, from the venues to the artists

Lara Coker-Hutchins, commercial director, Bush Hall, said: “You know that what you’re doing as an independent venue is actually supporting an individual artist and that’s what it’s all about. There are so many different elements to any live show that you go to as an audience member. Particularly in an underground, grass-roots venue. Independent artists, independent venues and correct payments and royalties all go hand in hand.

“It’s going to make our lives so much easier. We are all working towards the same aim. If we can make a small step and a small change in what we’re doing, then in the grand scheme of things means the right people are getting the right recognition then I can’t see a negative.”

Ryan Edwards, CEO, Audoo, added: “Recognise the Music is really special to us because it does exactly what it says it will. It recognises music to ensure that all artists of all shapes and sizes have their music recognised and that they’re paid equally and correctly.

“This helps the industry across the whole board. From the venues right to the artists; the biggest artists in the world to the new artists that are starting out. Venues don’t need to report, everything is automated. The music fees they have to pay flows straight through to the artists. It’s important because everyone is paid accurately and correctly.

Stuart Ellerker, operations manager, 229, said: “From my point of view of running a venue, the admin side of things is just intense. The amount of work we have to do in order to pay the royalties is a stretch on resources and it’s something we don’t have time for.”

“Recognise the Music is a system that can help this situation. A system like Recognise the Music, using modern technology will make life easier for everyone. All we want to do is get licence fees into the right hands.”

David Martin, CEO, Featured Artists Coalition, said: “The FAC represents over 4,000 artists and most of them are song writers. We provide a collective voice for those artists. The core of what we do is to aim to create fairness and transparency for those artists. This initiative completely aligns with our aim