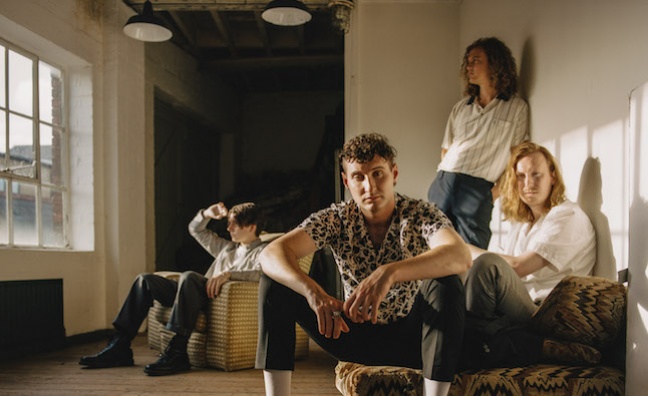 The Polydor-signed act, made up of Henry Camamile, Rory Young, Andrew Dawson and Oli Khan, have just released their debut album Open Up Your Head. It opened at No.3 with sales of 8,726, according to the Official Charts Company.

Having already released four EPs, the band have received early recognition from the BBC Sound Poll longlist, as well as being included on MTV PUSH: Ones To Watch 2020. To Sea Girls have sold out Brixton Academy, toured venues across Europe and have had six songs featured in Annie Mac’s Hottest Record In The World segment on BBC Radio 1.

Jon Chapman, of Radiate Management, said: "When Henry the singer first sent me the demo of Call Me Out, it was one of those ‘Oh no, here we go again’ moments where you're compelled to get involved. It was undeniable from the start that within the band we have great songwriters, who are young and refreshingly collaborative. Sony/ATV, first and foremost, were clearly huge fans of the band's songwriting ability as well as understanding Sea Girls’ ambitions musically. We're thrilled to be welcomed by Tim and his great team at Sony/ATV and are so excited for Sea Girls’ future with them."

Tim Major, co-managing director, Sony/ATV UK, said: “Sea Girls really stood out to us. They have prolific and collaborative songwriting talent within the band, an incredible work ethic and a relentless energy on stage. It’s been a pleasure to watch them build such solid momentum and we can’t wait to see them take off from here. Jon and Rachel have done a fantastic job and we’re excited to be part of the team.”

Felix Canetty-Clarke, director, creative research & data, Sony/ATV UK, said: “Having been at some of Sea Girls’ early shows, it’s been special to follow their journey so far. They have laid the foundations in the UK and I feel this band has what it takes to have a significant international impact.”