On The Radar: Hot Milk 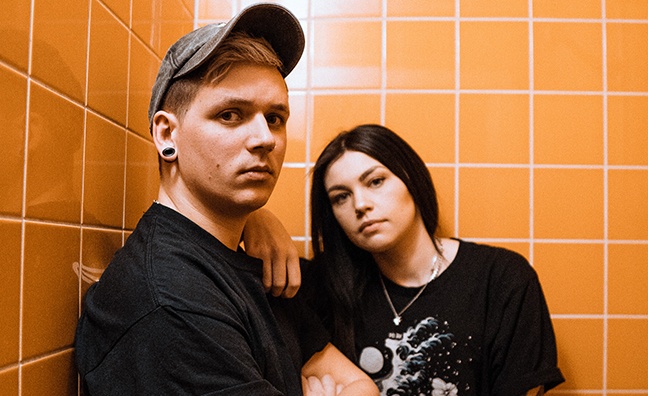 As far as breaking band CVs go, it would be hard to beat Hot Milk’s. They’ve toured Europe, secured the backing of a major management company and already have spins on national radio. Not too shabby considering they only have one song on Spotify. And only formed a year ago. If that gives some indication as to just how fast things are moving for this rock group, it’s even more startling when Music Week catches up with them just hours before they go on stage supporting You Me At Six in Berlin. There, co-singer and guitarist James Shaw observes, “Tonight will be our ninth ever show!” You could hardly accuse them of dragging their heels...

The story of how they pulled all of this off starts on a rainy night in Manchester. Hot Milk was founded by Shaw and Hannah Mee – who also acts as vocalist/guitarist. Not only had they previously played in bands, both were part of the Manchester music scene – Mee working as a promoter, Shaw a lighting director. Hot Milk, though, is the product of two unfulfilled musical dreams, latent talent and booze aligning.

“We’d just gotten back from work on a January night last year,” begins Mee. “It was really cold and wet so we said, ‘Want to write a song?’ We had a bottle of wine, an acoustic and just boshed out a song. Afterwards, we were like, ‘This isn’t bad!’” With influences such as Operation Ivy and The Replacements plus Green Day and Bring Me The Horizon, they soon had six songs done – think early Paramore with a neat co-vocal spin and you’ll be somewhere close. Next step: they played a blinder.

“We sent them out anonymously to managers because I didn’t want anyone to think we were using our position in a way that meant we got a leg up,” continues Mee. “We wanted the music to speak for itself.” One of the managers said songs wended their way to was Gus Brandt, founder of Cardiff Giant – home to Blink-182 (in partnership with Deckstar). Suffice to say, he became a fan. “The next day we were on a plane to London where we became smitten with Hannah and James,” he tells Music Week. “Nine months later the band has an amazing video, their first single is on the radio and they’ve finished a tour in Europe with You Me At Six. I’m excited for the rest of the world to love Hot Milk as much as I do.”

The omens are looking extremely good so far. The band’s earworm of a debut single Awful Ever After – which Mee says speaks to the frustrations of living “a life you didn’t want for yourself in the first place” – has been played on BBC Radio 1’s Rock Show and Hype Chart, plus Kerrang! Radio. Their debut EP is expected in spring. “We went in with Phil Gornell, recorded four songs and it’s getting mixed by Dan Lancaster,” beams Shaw. “When we get back off this tour we’re doing two videos for the next two singles.”

“We saw a gap and we tried to fill it ourselves,” says Mee. “They’re catchy songs, there are poppy elements, but they also have balls and personality. I’m really confident these songs are where they need to be in order to do something.”

But while things are moving fast, with the pair hinting at some “ridiculous” support slots in the pipeline, they’re also focused on laying the groundwork for a lasting career. “It needs a grassroots aspect,” says Mee. “It’s important we release the EP ourselves, hammer it home and feel like we earned our stripes. And also, to have full control over it as well.”

“We’re just ready to smash this year,” she concludes. “We’re going to do this with or without anyone else, we just want to fucking ‘ave it!”