On The Radar: Porridge Radio 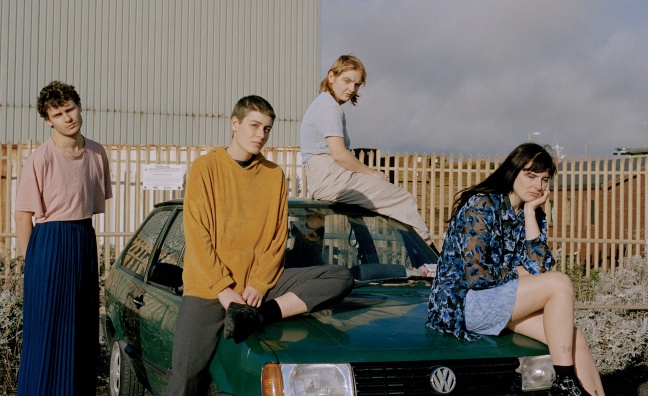 It’s often suggested that a good band needs a dynamic front person to drive them forwards. Whatever the truth, that is exactly what Porridge Radio’s Dana Margolin is doing when she answers the phone to Music Week: she is driving her band forward... To Margate.

Speaking in the car en route to a three-week, rule of six-compliant, residential writing bubble, it is fair to say the singer and guitarist has also done a fair bit of creative driving too.

Initially performing by herself, Porridge Radio came together in 2015 when Margolin teamed-up with fellow Brighton residents Georgie Stott (bass), Maddie Ryall (guitars) and Sam Yardley (drums), although she is still responsible for the initial writing of the four-piece’s songs.

“We’ve been a band for about five years and before then I was making music on my own for a year or two,” the frontwoman says. “In 2016, we made an album in a shed as a band. We’ve spent the last five, six years playing music all the time, playing shows and trying to release as much as we could, and just being busy. We learnt a lot from that process.”

Key to that education was some DIY releases via manager Josh Cohen’s Memorials Of Distinction label.

“We were helping out with all the releases ourselves, organising everything with him,” recalls Margolin. “It was nice to know how things work, to figure out what we need from a label and what we wanted to be.”

When you write, you put into words feelings that didn’t have words before

Album Every Bad, released in March, represents the culmination of all this experience. “We had an idea of what we wanted – even though it took a few years to get there – we really made that record sound the way it needed to sound and we’re all very proud of it,” suggests the singer.

A swirling mesh of guitar tempests and moments of clear calm, candid, incantation-like vocals create a fever dream of deep emotional currents, though they are underpinned by a bright optimism.

“Writing is a way everybody processes things. When you write, you put into words feelings that didn’t have words before,” suggests Margolin of the forces behind Every Bad. “It’s a way to order your thoughts and feelings. Since I was a kid, I’ve always enjoyed writing. I am someone who has always had a lot of notepads, and I have my phone notes and my voice memos. I have a load of different places to put my ideas. It’s nice to go and see what my thoughts have been and where I am. I like to look back through things to get a bit of inspiration.”

This approach certainly made an impact on this year’s Mercury Prize judges who included the indie band’s record among their 12 albums of the year.

“It was quite cool and nice to be part of it,” says Margolin of the nomination. “Because we were all locked down there wasn’t much difference in our lives, but it was great.”

Not that the band feel like they have missed out on too much. “I’m enjoying doing the things I can do, writing and some downtime. I’m not really focusing on it [not playing live]. It’s nice to be able to keep working on stuff, whether it’s touring or writing, it’s all good,” the frontwoman adds of a summer without gigs or festivals.

Along with the artistic step up, Every Bad was also Porridge Radio’s first album for label Secretly Canadian who they signed to late last year.

“When we did everything ourselves, we were constantly waiting for things to happen and to fall into place in the right way, now having a really amazing team is fun because it means we can actually keep moving,” suggests Margolin of the relationship.

An example of this fleetness is brand new, standalone single 7 Seconds, which was released last month before the Mercury Prize’s winner’s name was even out of the envelope. “It’s not something we’ve been able to ever do before: make something that points to where we want to go, then release it straight away,” explains Margolin.

While the aforementioned trip to Margate should help guide the group’s immediate future, Margolin says “everything is open and undecided” in terms of their plans for recording a new album.

She’s equally coy when it comes to the origin of the band’s breakfast-based moniker.

“Where did Porridge Radio come from? It was just a joke I had with a friend,” she says enigmatically. Whatever its origins, Porridge Radio’s status as one of the UK most promising bands is no laughing matter.