On The Radar: Priya Ragu 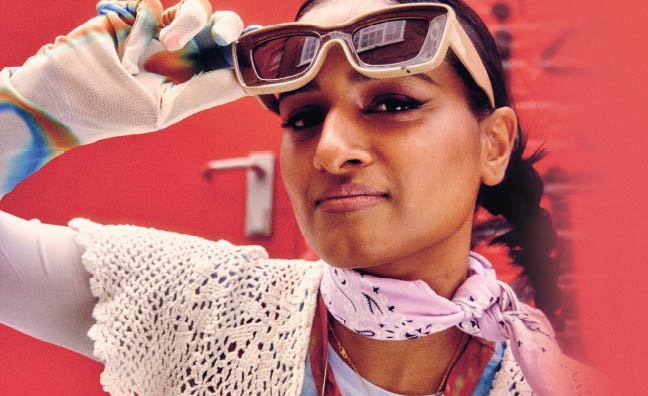 Priya Ragu is on a mission to subvert genre. Since she released her debut track, Good Love 2.0, last year, the Swiss-Tamil artist has achieved over four million streams, a major-label deal, booked a headline tour and is set to feature on Jungle’s next album. And while that might sound like a whirlwind, the journey to get here has been years in the making.

Ragu was born and raised in Switzerland after her parents fled the Sri Lankan civil war in the 1980s. Her family heritage, she says, tuned her ear to a vibrant mix of music.

“At home it was Kollywood [Tamil cinema], outside it was R&B and soul music,” she begins. “It was never like, ‘OK, I’m going to change to rock or try something different.’ It was always Black music for me, since the beginning.”

While her family held jam sessions at home every weekend, a young Ragu was soaking it all in.

“I could tell who was good and who wasn’t, who sucked at timing and who was out of tune,” she laughs.

Ragu would later get behind the mic, while her brother Japhna Gold played keys in her father’s band at local functions. But it wasn’t until she heard Lauryn Hill that she felt a true connection.

“Her voice spoke to my soul right away,” she says. “I started to listen to the music, record myself and write down the lyrics. Digging for new music became a big passion.”

That search turned into a competition between Priya and her brother, and the start of a collaboration that would last.

“One time he was listening to Donny Hathaway, and I said, ‘You have to tell me who the singer is,’ and he said, ‘No, he’s mine!’ Then, when he would leave the apartment I would hack his computer to find out who it was!”

The siblings soon realised Priya could sing and her brother encouraged her to perform, but her parents, who were concerned for her future, thwarted the opportunity.

“They’d tell me to focus on my studies, get a job and then do whatever I wanted on the side,” she says. “They’re still telling me to keep the job!”

Ragu kept her music a secret as she began uploading covers to Facebook where she soon found her audience (“I was like, ‘OK, I guess this is my superpower – music’”).

But it wasn’t until she went to her first open mic night at 16 that Ragu truly found her voice. Telling her parents she was going to a birthday party, she headed to Zurich, an hour from her hometown of St Gallen where she gave her first solo performance, singing Killing Me Softly while her brother beatboxed. Later, she took a job in an airport, doing backing vocals in her spare time, but she needed more space for music. So, in 2017, Ragu made the move to New York, where she collaborated with rapper and producer Oddisee.

“People used to say that I was a wasted talent and that really annoyed me – I had to give myself a chance,” she explains. “So I went to the States to observe the creative energy there and connect with other musicians, write 10 songs and then come back. It was a journey of making music and finding myself.”

In 2020, she released her debut single Good Love 2.0 and the world began to take note. Now with over 2.2 million Spotify streams along with remixes from Joe Goddard and Little Dragon, the track was initially picked up by BBC Asian Network’s Bobby Friction. He showed it to Annie Mac, who played it on BBC Radio 1.

“Suddenly, I had 20 labels knocking on my door,” she smiles.

After a few Zoom calls at the height of the pandemic, Ragu began working with Verdigris Management who helped secure a deal with Warner Records.

“The team have elevated my vision and everybody is super-nice and supportive,” she says. “It was just unbelievable how everything came together. I gave up my apartment in Zurich when the pandemic happened and moved back to my parents. I reconnected with them and let go of music. I just wanted to be, meditate and write. But after I let go of everything, I attracted it back into my life, only in a bigger way.”

Working alongside her brother, the two began to create Ragu’s debut mixtape, Damnshestamil (due next month). Initially, however, attempting to merge musical styles caused friction.

“It was a lot of back and forth with my brother, because he was very open-minded,” she says.

But after they got down the alluring sounds of first track Leaf High, the two worlds they had kept separate blended into a vibrant and euphoric listen. The 10-track record is a vivid celebration of the genre-bending sound they call Ragu-wavy – a fusion of heady pop, Tamil chants and slick R&B.

“There was a higher power when we created these songs,” she explains. “It was also very emotional. With the song Kamali, for example, my brother was crying while writing it. I wonder if I will ever create something like that again.”

The hypnotic Kamali is inspired by a short film of the same name that tells the story of a single mother in a small Indian village breaking free from the physical and mental abuse of her husband. Like much of Ragu’s work, it thrusts age-old traditions under a microscope.

“I could really relate to the story, growing up you have visions and dreams that are limitless,” Ragu says. “We had to bring that story out.”

It’s a brilliant culmination of everything that makes Ragu who she is, from Tamil lyrics to hip-hop beats and spiritual melodies. And after the journey she’s had so far, it feels even sweeter.

“I get so many messages from people who are very proud because they’ve experienced the same things,” she says. “It’s what music is about, having a message and bringing a transformation within people."