On The Radar: Ray Blk 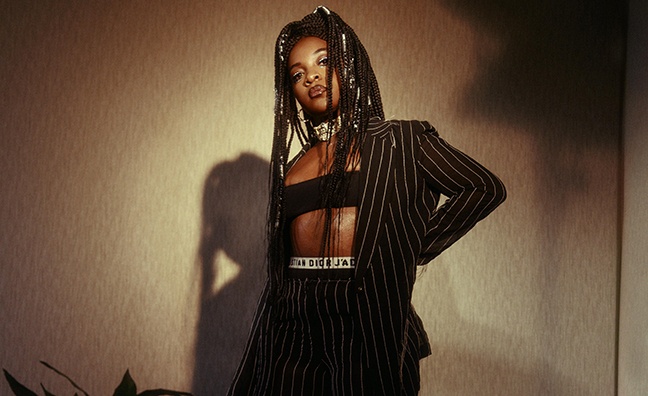 After six months during which her music has taken her to places she’d never been before, Rita Ekwere is at home in Catford, South-east London when Music Week drops in. This is the place it all started for the singer and rapper known as Ray Blk, whose breakthrough My Hood was a Stormzy-featuring ode to revving mopeds, tower blocks and fried chicken shops. But among those touchstones lurked social unrest and crime, and it’s there that we begin.

Blk may have notched milestones including a BBC Sound Of 2017 win, an Emeli Sandé support tour and a gig at the Music Week Awards but, she says, Catford remains unchanged. “Shit’s still the same, which is upsetting. Young people are maybe more aware of politics, but there hasn’t been much progression. Young people are still struggling and looking to escape.” Blk sees progression as “more attention [being paid] to underprivileged young people, instead of putting them down”. She remembers a childhood where “the troublesome kids were kicked out of school”, and calls for “more outlets, financial help, support from teachers”. Sadly but firmly, she adds, “There’s never been anywhere to go in Catford, no way you can express yourself.”

Her obvious passion gives an insight into how Blk has become one of her scene’s breakout stars, advancing rapidly from SoundCloud demos and hustling for shows. Those early days led to a connection with New Gen founder and XL Recordings A&R Caroline Simionescu-Marin, a hook up Blk, whose track Busy appeared on January’s New Gen compilation, is thankful for. “That was the first community that really embraced me,” she says. “We used to do the same shows in East London, we built a connection.”

Her Durt mixtape and subsequent singles My Hood and Doing Me may feature luxuriant arrangements, but her ties to rap and grime remain tight. “I’ve always loved it from when I was young, it’s a personal attachment. It’s great to see it getting respect from a wider audience.” She puts grime’s rise down to young people connecting to the rebellion at the heart of the genre. “There are no rules,” she says. “People don’t go into sessions trying to create hits, it’s about doing it yourself. It’s not orchestrated, it’s real.”

The same can be said of Blk’s own music, full of relatable emotion set to inventive soul and R&B. Themes of empowerment are easily ensnaring a growing fanbase, who scream every lyric right back at her wherever she plays. “I used to roll my eyes when artists said this, but I feel like my fans really know me! We have a special relationship,” she says.

Still unsigned, Blk reveals her journey into the industry has been “eye-opening”, adding: “It’s important to educate other artists like me that ownership of what you’re doing and keeping an open mind are really important.” After working with producer Jimmy Napes (Sam Smith, Mary J Blige) on Doing Me, Blk is keeping schtum about future plans, only offering the carrot that she’s collaborating with “people I’ve dreamed of working with”. That said, this is about nothing more than Blk’s vision, and she issues a closing warning to anyone who might think otherwise: “I don’t want shitty pop choruses - I want to do my own thing.”