On The Radar: The Regrettes 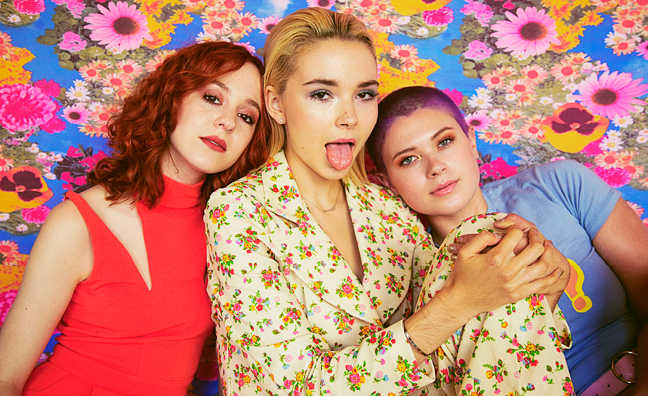 The teenage trio out to save the world with rock‘n’roll...

"The shows here are so damn fun…”

Lydia Night is midway through a short run of UK dates with her band The Regrettes, and she’s drunk on positivity. “It’s been so nice, the UK is my favourite. I feel very at home,” she says, reflecting on festival performances at The Great Escape, Dot To Dot and a headline show at London’s Old Blue Last. “The fans go nuts so we have a blast.” Going nuts and having a blast are pretty much unavoidable when it comes to The Regrettes. Mayhem has followed the LA three-piece (completed by guitarist Genessa Gariano and bassist Sage Chavis) ever since they formed at the city’s School Of Rock in 2015.

It’s no surprise, then, to hear Night’s reflections of pogoing around to The Ramones as a child. “They were my favourite band when I was two years old,” she says. “I was obsessed. It was just so easy to dance and sing along to.” Her description applies to The Regrettes’ own music, too: sharp guitar lines, breakneck pace and sing-along choruses coalesce for a brand of garagey pop-punk that’s equal parts brattiness and sheen.

The trio, and Night in particular, have rightly attracted just as much attention for their lyrics. Last year’s debut album, Feel Your Feelings Fool and this year’s Attention Seeker EP present the world through a teenage lens in uncompromising fashion. Anxiety, self-esteem, love, equality, gender and social convention… Night’s net spans far and wide. “One huge issue I see is that a lot of kids don’t think they have a voice because they’ve been told to stay quiet or that their opinion doesn’t matter for their whole lives,” she tells Music Week. “Our job is to make sure they know that’s not true.”

The fervent reaction that follows the band both online and on the road proves their messages are hitting home, and Night acknowledges the increasing reach. “When it started, it was always just me writing songs in my bedroom to make myself feel better,” she says. “It was super therapeutic, which it still is, but I never expected it to touch as many people as it has. It’s the coolest thing ever.”

Night is a firm believer in rock‘n’roll’s healing powers. “It has got me through almost every single one of my problems because it’s just so real and powerful,” she says. And, at a time when debate over the potency of our rock scene is never too far away, The Regrettes present a compelling argument. “Rock‘n’roll to me now means speaking your mind and taking action,” their fireball leader concludes. “It’s extremely important in 2018, because we’re living in such an insane time politically, it’s so easy to want to just shut up and not take action.”