On The Radar: Yonaka 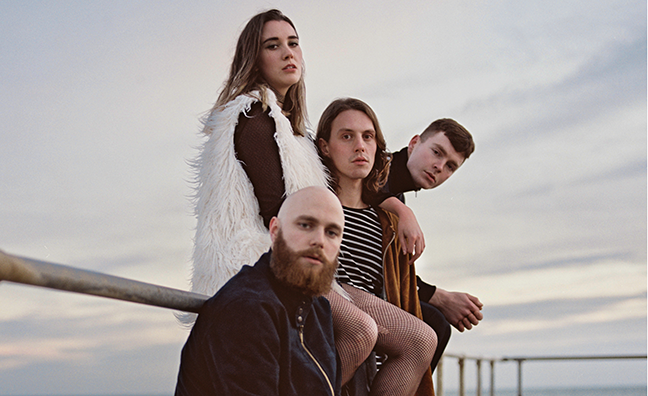 Yonaka are suffering from the kind of hangovers that don’t bear thinking about, shuffling in to meet Music Week in a riverside boozer clutching takeaway pizza boxes and ordering Bloody Marys. “Gin is savage,” observes drummer Robert Mason. Our rendezvous takes place the day after the Brighton four-piece – completed by singer Theresa Jarvis, guitarist George Edwards and bassist Alex Crosby – laid waste to a sold out Borderline in central London. Already renowned for their feral live shows, they gave it everything. “It was mental,” Jarvis offers. “It felt like the first proper show, we just kept giggling and saying to each other, ‘Oh my God, everyone’s going mad!’ It was really lovely.”

The singer’s words immediately uncover the zest and enthusiasm that characterise Yonaka, who took their name from the Japanese word for midnight. That darkness represents the group’s flipside, anger and blackness coursing through their music, informed equally by their love of riffs and alt.rock as it is hip-hop and pop. “People were singing along to songs we haven’t even released,” Crosby says, referencing the upcoming Heavy EP, produced by Rodaidh McDonald (The xx, Sampha, King Krule). “The reaction is definitely increasing, last night was probably the craziest gig we’ve done.” As they collapse into stories of “the crew” who follow them to every show, and the fan who gave them “an actual published book, with photos of us from a year and a half ago”, it’s clear that Yonaka ignite something in people.

The support slots they’ve filled so far – Frank Carter And The Rattlesnakes, Drenge, The Libertines – offer a hint at their trajectory, which has been on an upward curve since Phil Taggart released single Ignorance on Hometown Records. “You have to know something is totally 100% what you want to do,” says Jarvis. “And as soon as you know that, you can have it. We want to do this properly. We were in the studio recently and I was looking at how many albums Adele has sold and I was like, ‘We need to do that!’”

Yonaka are itching to break far beyond their Brighton base, where they met at music college. And with Atlantic and Various Artists Management behind them, not to mention their live show, they’re certain they can do it. “It’s everyone’s dream isn’t it, really…” says Mason of their major label deal. “It’s very natural and effortless between us, when we play live, you don’t have to think about anything. It just happens.”

And with that simple interjection, Yonaka have done themselves justice, hungover or not. Pizza boxes under their arms, they leave the pub, ready to take on the world…