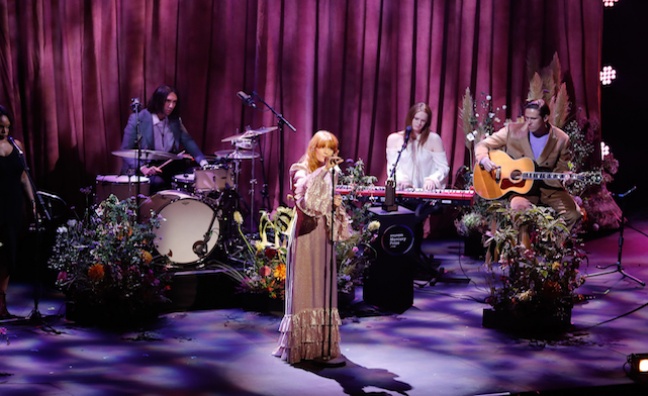 With the increasing pressure on album sales, the 2018 Hyundai Mercury Prize really had to come up with a worthy winner. Whatever your favourite was on the shortlist or not, there's no doubt that Wolf Alice's Visions Of A Life is classic Mercury Prize record - alternative rock with big potential to build on the win. And the band celebrated in style, too.

Despite a no-show from the Arctic Monkeys, it was also one of the best awards shows of recent years. Florence + The Machine returned from their US tour to bring some star power, Sons Of Kemet's thunderous jazz with dual drummers must have got them in with a shout for the prize, and Nadine Shah put politics back into indie rock with a rousing performance that had the audience on their feet. Strong performances from King Krule, Novelist and Lily Allen should also give their campaigns a boost.

Here are Music Week's highlights from the awards show and behind the scenes at the Eventim Apollo...

In the early days of the Mercury Prize, an album like Wolf Alice’s Visions Of A LIfe would have been a front-runner for the gong. An unashamed indie rock crossover record, bristling with brilliant songs and emotional intent, it could have won in 1994 or 2002, but its victory seemed much more unlikely in 2018 despite its pedigree. That tells you how much the Mercury has changed (no indie-rock act had won since Alt-J in 2012), but the nicely-scrubbed-up band’s beautifully poised performance of Don’t Delete The Kisses was the most striking of the night and Ellie Rowsell’s shocked, joyous reaction to their win seemed like the purest response in many a year. Kudos, too, to Jamie Oborne’s Dirty Hit, emphatically proving that the indie label aesthetic remains alive and well. Hopefully the band’s heartfelt request for a Jägerbomb was met many times over before their night ended…

Nadine Shah arrived at the Mercury ceremony to find herself in the unusual position of red hot favourite, with a lot of industry ‘smart money’ being punted in her direction. Holiday Destination would have been a worthy winner too but, ultimately, the role of underdog suits her best. When Music Week ran into her during the lull between performance and winner’s announcement she seemed gloriously unfazed by the whole Mercury circus, but it seems unlikely that anyone who saw her tear through Out The Way would have felt the same. It was the night’s most abrasive performance, almost as dazzling as the lights that strafed the audience during it. She might not have won when odds-on but you can bank on an against-all-odds career triumph from her at some point.

Not many Mercury nominees can get a previous winner to join them on stage, but then Everything Is Recorded is a unique collaborative project headed up by XL Recordings head honcho Richard Russell. XL/Young Turks artist Sampha, who won last year for Process, was back at the Eventim Apollo for the evening’s most intriguing performance. Gathered around a table on stage, the dozen musicians combined for the beguiling Close But Not Quite, all overseen by Russell who triggered electronic beats. It was complemented by an apparently pregnant dancer who showed off her bump while gyrating to the soulful stew. As host Annie Mac said, it looks like a very fun album. With fairly modest sales so far of 3,609, it’s also ripe for wider discovery after this televised performance.

Speaking about the project’s prize pedigree before the show, Russell said: “There’s a couple because Green Gartside from Scritti Politti is playing guitar with us, he played keys on the album, and he was nominated before, so we’ve got a bit of Mercury experience. Tic, who’s one of my collaborators, performed here before with FKA Twigs. You only do one song, so you’ve got to think, ‘How you do that?’, especially with a project like this. That’s all I've really considered tonight, is that performance. We’re doing it much like we did the record, we’re sat round the table with lots of fun bits of kit.”

The 2018 Mercury Prize ceremony coincided nicely with the publication on the same day of Lily Allen’s autobiography, My Thoughts Exactly. Cue plenty of promotion for the book, which has already hit the headlines after she expanded on previous allegations of abuse she experience within the record industry. It was a theme she ran with during outspoken comments on the red carpet run before the awards show. “The music industry is rife with abuse,” she said. “The more power that women have, the harder it is for the men in power to get away with the shit that they’ve been getting away with forever.”

While Parlophone’s co-president Mark Mitchell turned up at the Mercury launch in July to praise Allen’s latest album, No Shame, she seems unenthusiastic about the campaign, which has so far resulted in sales of 17,862, according to the Official Charts Company. “I do feel like my record label have been a bit crap with promoting this record - I don’t know if you’ve seen any posters anywhere or advertising,” she said. “[But] it feels amazing that people that care about music decided to put me in the list. The album is quite a sad album and the book is quite sad book, but today is a really happy day.” If she had have won, Allen’s speech might have been an uncomfortable experience for Parlophone, who must be a bit nonplussed by her remarks. Perhaps the buzz around the book and the Mercury nomination can get the record back in the Top 10...

With Arctic Monkeys otherwise engaged and Noel Gallagher present but not performing, Florence was left to pick up the baton as the one true arena-filling superstar to take to the stage. High As Hope was kept off the top spot by Drake upon its release in June despite a perfectly respectable first week sales tally in excess of 40k, but never felt like a serious contender for the Mercury Prize. Nonetheless, Welch's beautifully shimmering rendition of Hunger, which started the show, demonstrated exactly why she was in the conversation.

Though Jorja Smith may not have approached the colossal sales figures of her successor as BRITs Critics’ Choice, Rag’N’Bone Man, Lost & Found has continued to pick up steam and looked a decent outside bet for last night’s honour. It wasn’t to be, but Smith’s captivating Blue Lights showcased her stunning voice and star quality. Still only 21, you suspect it won’t be the last time she makes the Mercury shortlist.