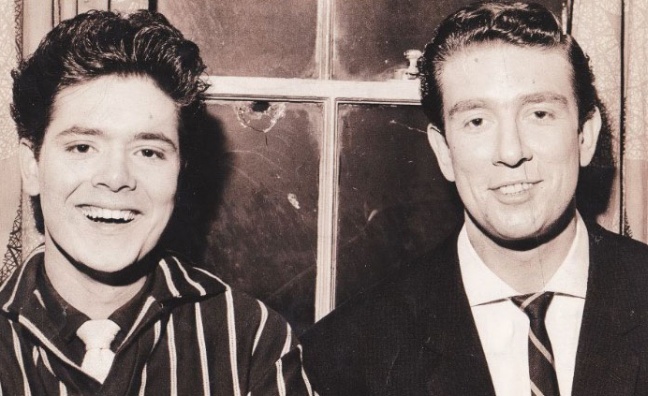 BBC Radio 2 DJ Johnnie Walker is among the music industry figures to pay tribute to the late Tony Hall, who has died aged 91.

Since Music Week reported the sad passing of the former exec, TV presenter, radio DJ and writer, there has been an outpouring of affectionate memories.

In a 65-year career, Hall (pictured with Cliff Richard) co-hosted the TV series Oh Boy, DJ-ed at Radio Luxembourg and was a promotions executive at Decca, where he helped break acts including the Righteous Brothers, Ike & Tina Turner and The Ronettes. When he left Decca in 1967, he formed his own promotions company, Tony Hall Enterprises, set up music publisher Brampton Music and managed acts such as The Real Thing and Loose Ends.

Peter Robinson, founder of Dome Records and former CBS, RCA and MCA executive, hailed Hall as “a uniquely gifted record man”. Here, Music Week has collected the many further tributes that have poured in since his death on June 26 following a period of illness.

“Tony Hall was my first radio hero who introduced me to great London American R&B records like Willie Mitchell’s That Driving Beat on his Radio Luxembourg show. He loved the records he played and while others politely read their scripts, Tony did his shows standing up, raising his voice and raving about some of the records. His shows were so different with such good energy and the records were brilliant. He told me ‘the bosses get upset because I get excited and raise my voice but I can’t help myself, I just love the records I play’. I was a club disc jockey in Birmingham when Tony compered a Four Tops tour and I wrote him a letter and left it at the stage door. I was amazed when he mentioned it during the show and told me to go backstage afterwards where I met him and the Four Tops. That was a huge moment for a young music fan with a dream of one day making it on to the radio. He was a good man and I will always be grateful for the support and encouragement he gave me and for the fantastic R&B music he turned me on to.”
Johnnie Walker, BBC Radio DJ/presenter

“Tony was one of the earliest and most passionate advocates of jazz in the UK, beginning in 1949, when he first compered at the Feldman Jazz Club and hosted BBC radio’s Jazz Club. He was crucial to putting British jazz on the map in the late ‘50s, producing a series of acclaimed albums for Decca’s Tempo imprint, and became the only Brit to produce an album for the iconic Blue Note label during its ‘50s-‘70s heyday. He first wrote about jazz for Musical Express in the ‘50s and returned to his first love for the last 17 years of his life as a highly-respected writer for Jazzwise magazine. It’s been an honour knowing and working with him.”
Jon Newey, editor in chief, Jazzwise

“When I was producing Ready Steady Go, Tony represented many of the US artists we could feature on the show, and so we became good friends. I attended some lovely dinners at Tony’s house in Mayfair and I remember George Harrison turning up at one of them in his pyjamas.”
Vicki Wickham, TV producer/songwriter

“Tony Hall – a giant among men! I was privileged to have him as a manager. Tony taught me the beauty of being humble. Rest in peace, Tony, it was fabulous!”
Steve Nichols, artist, Loose Ends

“He was one of ‘us’ from back in the Tin Pan Alley days. He presented the Joe Loss show every Friday from the Playhouse Theatre, introducing all the top bands of the day including The Beatles, The Stones, The Bee Gees, The Small Faces. He plugged some of the best (Hendrix, Joe Cocker) and just had sheer belief in those he rated. Unlike many of the ego-ridden crooks of the time, he was in it for the music and helped anyone of the like. Many years later we shared offices in Golden Square where he continued to manage some wonderful artists to whom he remained totally dedicated - The Real Thing, Loose Ends. Overused phrase, but he really was a legend. RIP Tony.”
Ron McCreight, TV and radio promoter

“I was very fond of Tony. He was a great record man and sadly there are few like him any more. RIP Tony.”
Barry Blue, singer/songwriter/producer

“Who can forget the Radio Luxembourg catchphrase: 'That's it and that's all from yours sincerely, Tony Hall.' RIP.”
David Hancock, songwriter

Tony had great ears, a big heart, and enormous talent

“I was thinking about TH just the other day and wondered how he was doing. It was prompted by finding an old contract my group signed with Tony Hall Enterprises (circa 1970) and a few letters from Tony. He was a good chap, whose immortal words I remember when I asked him if we would be doing a photo session. He replied: 'First you've got to learn to play in time with the bass player.'"
Will Birch, songwriter/artist

“Tony was one of my early mentors, a wonderful man who gave me so much help and encouragement from when I was 16 years old. My brother David worked for Tony at his Noel Street Offices and he will be equally sad at this news. RIP Tony.”
Stephen Colyer, songwriter

“Remember him initially on Radio Luxembourg. Used to see him regularly through the ‘80s. In it for the music. A gentleman.”
Chris Briggs, exec

“I have the greatest respect for Tony, he was a gentle person and generous of spirit."
Peter Knight, artist (Steeleye Span)

“Tony was my idol when I first started as a plugger for KPM . He was the star promotion man. RIP, a wonderful guy.”
Tony Roberts, exec

“Tony hall told Steve Brown about Paul Buckmaster, who told him about Gus Dudgeon – that resulted in some of the best albums ever made!”
Stuart Epps, producer

“So sad to her of Tony's passing. A true music man! Lovely man, signed me to THE in 1967 at the same time as Mr Cocker. Tony had great ears, a big heart, and enormous talent. He will be sorely missed. So many of the people who made the UK music industry the huge force it became in the world are leaving us at the moment. They were a generation of great pioneers, who promoted great music, incredible passion and above all enjoyment on a scale never-before-seen.”
Bill Kimber, artist

“Shortly after leaving university, I went for an interview with Tony. And for years after he would remind me of how it must have been the first time in history that a guy went for a job as a record plugger with a reference from a professor of English Law. I didn’t get the job.”
Ray Connolly, journalist/author