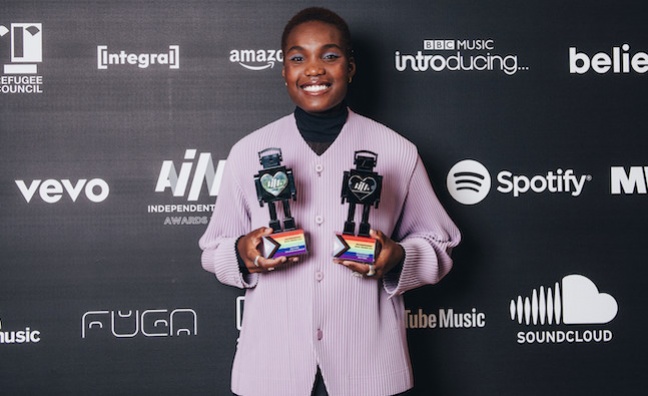 Independent music legends and rising stars triumphed at the AIM Awards 2021. The virtual ceremony was hosted by Tiffany Calver and Jamz Supernova.

Music Week reported this week how the independent sector has been thriving despite the impact of the pandemic.

Arlo Parks said: “I want to say a big big thank you to my fans, to my team, I'm grateful to be growing every day as an independent artist and this period has been so difficult, so chaotic and so confusing, so to be able to bring people light in this time of need has been really special.”

Enny said: “Very, very, very unexpected, especially how early on everything has started happening, so I'm just really filled with a lot of gratitude. Wanna big up my team and everyone that’s been a part of this journey so far. Thank you!”

A Hero’s Death by Fontaines DC reigned supreme in the Best [Difficult] Second Album category in association with BBC Radio 6 Music, while Wesley Joseph’s self-directed visuals for Thrilla were recognised in Best Independent Video in association with Vevo.

I'm grateful to be growing every day as an independent artist

Jayda G said: “Thank you everyone. This award is for all the female Black music producers working in electronic music. There’s room for us!”

Working Men’s Club took the prize for Best Creative Packaging with the RAW Edition of their self-titled debut, released by Heavenly Recordings.

US singer-songwriter Lauv notched his first AIM Awards win with the PPL Award For Most Played New Independent Artist, while the public voted to crown Ben Böhmer the winner of Best Live [Streamed] Act in association with On Air.

As well as highlighting fresh talent, the AIM Awards is also about honouring those who have paved the way. Joan Armatrading scooped Outstanding Contribution To Music in association with Merlin after reinventing folk, pop, soul, blues and rock across an almost five decade career at the top. She released her 20th album, the critically acclaimed Consequences (BMG) last month.

The livestreamed ceremony featured performances by Lava La Rue, Tricky, Working Men’s Club and Enny. All performances and interviews are available to watch now, alongside the full livestream on the AIM AwardsYouTube and Facebook channels, which will be available for seven days.

On the AIM Awards 2021, AIM CEO Paul Pacifico said: “Having been through one of the toughest times in music history, this year’s Awards celebrate the humanity at the heart of the independent music community. The relationships between people, whether artists and their teams, independent distributors, and the platforms and independent record stores out there surviving and thriving in spite of challenges of the day. And of course, the fans, the people that make all of this possible. We’re a mutually reinforcing community that stands and succeeds together. Congratulations to all of our winners!”

For the first time ever, the winners of the Local Heroes Awards in association with BBC Music Introducing have been announced. Nominated by BBC Introducing presenters throughout the regional territories, the new category shines a light on individuals, artists or companies who have demonstrated unwavering support for their local community.

The awards eligibility period was the 12 months until May 4, 2021. The full list of winners are below.

International Breakthrough in association with Deezer

Krust – The Edge of Everything (Crosstown Rebels)

Dream Wife – So When You Gonna… (Lucky Number)

One To Watch in association with BBC Music Introducing

Athens of the North


Best Live [Streamed] Act in association with On Air


Outstanding Contribution To Music in association with Merlin


Indie Champion in association with MCPS

Come Play With Me (BBC Music Introducing in West Yorkshire)

Save Our Scene - George Fleming (BBC Music Introducing in London)