"As bad as it seems, life always finds a way to make it through the cracks": Dave Grohl on Foo Fighters' bold new album 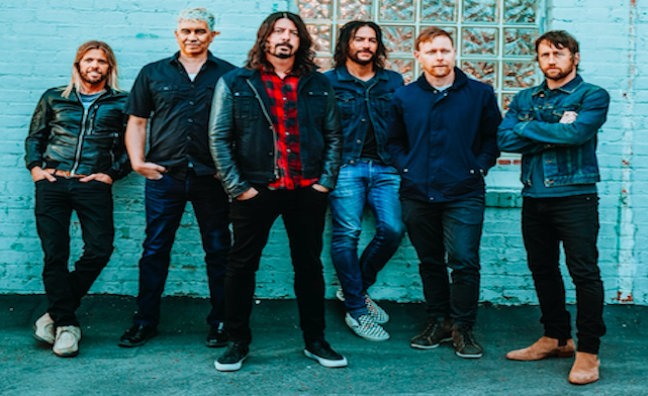 It is without doubt at this point that Foo Fighters have had a blockbusting 2017. They’ve already delivered an incredible Glastonbury headline set; guitarist Chris Shiflett unveiled his excellent solo album, West Coast Town; and most recently there’s been their stellar showing on Radio 1’s Live Lounge and the announcement of a London pub takeover ahead of their show at the O2 Arena. Yet what’s most surprising about all of this is that they haven’t even released their new album: all of this is but the backdrop to the release of Foo Fighters’ ninth record, Concrete And Gold. Earlier this year, Music Week gathered Dave Grohl, drummer Taylor Hawkins, super-producer Greg Kurstin and top Sony execs together for our Big Interview to tell us all about the plans for Concrete And Gold – released September 15 via Columbia.

“To me it was all about moving away from what we had done before,” Grohl revealed to Music Week. Here, the frontman takes us further into the creative process behind the album…

Let's start with the title. What was the sentiment behind Concrete And Gold, and why was it representative of the whole body of songs you’ve written?

Dave Grohl: “Well, you know, this is usually how it goes: we’ll write a bunch of music and we’ll see what works and what feels good. After maybe 15/16 songs you start to figure out the direction that you’re going to take when you get into the studio, or at least some idea. But lyrically I had nothing. I have kids – I don't have a spare minute in my house, ever! So I thought, I’m going to Airbnb a house out in the country and go there for five days, bring a case of wine, bring my computer, my guitar, and a microphone, and I’m just gonna write.”

How did that process go for this record?

“One of the ways that I wrote a lot of these lyrics was, I would sit and just sing things phonetically off the top of my head, and listen back, and I would discover words. Then I would start discovering themes, and it was like a fucking séance, like I had no idea really what was going on. But then I would listen back, and as I was singing these songs, I started noticing these themes. A song like Run, Concrete And Gold, Make it Right, Sunday Rain or La Dee Da, there was this feeling of desperation. This is not long after the… Well, it’s not long after Trump. La Dee Da was a lot to do with freedom of expression. I don't want anyone controlling my life that I don't fucking know. They don't know me, I don't know them. I don't want to be under their control, you know? It’s inevitable, somehow, you’re controlled by everything. But a song like Run, that’s a feeling that I have almost every day. Where I just turn on the television to see what’s going on and I just want to run for my fucking life. Concrete And Gold, that song in particular, I realised that was this beautiful resolve to all the questions that are within the album: that our roots are stronger than you know, and through the concrete we’ll grow. And so, as much as you feel weighted down by the world, there’s still a way. I mean, in nature, the purpose of life is to grow, you know? And nothing can stop it. As bad as it seems, life always finds a way to make it through the cracks. So that’s kinda what that was all about.”

A song like Run, that’s a feeling that I have almost every day. Where I just turn on the television to see what’s going on and I just want to run for my fucking life

The new album also sees your sound expand radically with Greg Kurstin. What did you first feel when you heard that expansive sound playing back to you in the studio?

“We had the song Concrete And Gold. The original demo was much more sleepy, then the band’s demo was so perfect in one take that I thought that should be on the record. The one we did in pre-production I thought, That’s just going to be on the record. It’s fucking perfect. We started getting sounds and recording the song, and I imagined there being a choir in the chorus – the chorus sort of explodes into this gigantic, heavy Pink Floyd, Black Sabbath section, and I thought, Oh, I can hear a choir in the background somewhere. That day I was outside, writing the lyrics, about to go in and do the vocal, I’m sitting there at this table with my guitar and my lyric book and through the parking lot comes this guy Shawn Stockman, who is in the band Boyz II Men. We had met before, and I said, Hey man, what’s going on? We started talking; he likes our band. He started talking about stuff, we talked about my leg [break], we talked about the band, we talked about the record, and I said, Oh shit, this song today, I want there to be a choir on it. Would you sing on our album? He comes in and sits down and goes, Okay, what do you have? I said, First of all, this song is dark, and heavy, but in the choruses, I imagine there to be choir, so check it out. We played it for him, and he sat there listening. And we said, Okay, what do you think? He says, Alright, I’m going to go in, I’m gonna do a triad, and then a wandering track, then I’m going to harmonise the wandering track. I had no idea what any of that shit was, and I said, Okay, go ahead!”

And what did you make of the outcome?
“We put it all up together and, sonically, it’s so fucking big. It blew our mind. That was, I think, maybe the fourth song recorded. He left the room and I said, The rest of the fucking record has to sound like this! Today is the first day of us making this record. Because of the guy from Boyz II Men, our album turned into Motörhead meets Sgt. Pepper.”

On that Motörhead note, it is with great sadness, now, that we live in a world without Lemmy in it. He was a friend, collaborator and influence to you – on any level do you feel a responsibility to carry the torch of what he represented to rock?
“No, but I mean [his influence is always going to be there], but almost just as much musically as personally, Lemmy was such a wonderful person. He looked like an outlaw, and played it like a fucking pirate, but deep down, he was a warm, generous, brilliant, sweet guy. You know, my family has hung out with him before, from my daughter to my mother and sister. Everyone’s hung out with Lemmy, and you walk away saying, That’s the guy from Motörhead!?”