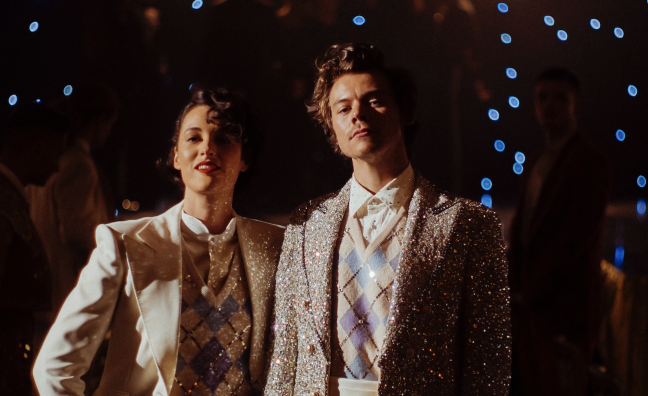 Ben and Gabe Turner directed the videos for Harry Styles’ singles Golden and Treat People With Kindness, and the Fulwell 73 partners have opened up to Music Week about working on the blockbuster Fine Line campaign.

The video for Treat People With Kindness (TPWK) stars Fleabag creator Phoebe Waller-Bridge and was released on New Year’s Day 2021, more than a year after Fine Line came out. The Turner brothers were also behind the film for Golden, which dropped in October. TPWK has 18,019,468 views on YouTube, while Golden, which was filmed under Covid restrictions on Italy’s Amalfi coast last year when lockdowns eased, has racked up 81,373,613.

Ben and Gabe Turner have been working with former Music Week cover star Styles since One Direction emerged on The X Factor, making videos for Steal My Girl and Drag Me Down. Their Fulwell 73 partner Ben Winston has also worked extensively with the group.

The brothers told Music Week that their longstanding relationship with Styles leads to an easy working environment, and the idea behind the TPWK video – which features Styles and Waller-Bridge doing a choreographed dance routine and was filmed at East London’s Troxy early in 2020 – came about after Styles saw the actor’s Fleabag live show.

“It was always supposed to be the last thing on the album run as an ending beat, and the album did so well that it just carried on,” said Gabe Turner. “We just didn’t know when [it would drop]. New Year’s Day 2021 was the perfect release date for us in the end.”

“Music videos are fun, they’re the most impressionistic of the things we do,” said Ben Turner. “When else are we going to shoot a black and white dance video? There probably isn’t another avenue for us to do that.”

Here, the brothers look back on shooting Golden and TPWK with Styles and his team, talk Fine Line and trace the history of their work with the singer…

What are your reflections on the Treat People With Kindness video now it’s out?

Gabe Turner: “There’s a tendency when you’re working and going from job to job, not to sit back and enjoy something when it comes out, because you’re in the middle of something else. This was really enjoyable, a piece of work that’s really expansive, joyous and has loads of people dancing and reminds you of a time where life was really fun felt really nice. Harry and all of One Direction have incredible fans and they obviously amplify your work and make it bigger and feel like more of an achievement, which is really nice because you’re like, ‘The whole world is talking about it’ [laughs]. When really, the whole world is talking about Harry, or the boys, but it feels very special to be a part of that.”

Ben Turner: “It was just an amazing opportunity to work on a song we loved with some people we loved. We’d never worked with Phoebe before, so that was really exciting. It just feels so different now because we’ve been stuck indoors for a year. This thing about treating people with kindness, it just feels more prescient even than it did then. It feels like a really important message. The world has changed since we made it, the video has stayed the same but the world has disappeared.”

Have the videos have been extra important to the campaign with touring postponed?

GT: Harry’s got an incredible team, his manager Jeff Azoff, Tommy Bruce, Molly Hawkins and Rob Stringer and the label, they’re just brilliant. They’ve been really impressive in how they view and plan stuff. The videos kind of replaced him touring, so they had to have an impact. His fanbase wanted something to feel positive about and joyous about. We just feel hugely privileged that we were able to collaborate on two of the songs. We love the album, it’s a real quality piece of work. With Harry, because the camera loves him so much, you really want to raise your game and make something really special because you’ve got such an incredible protagonist. And then with Phoebe involved too, me and Ben thought this might be the best it ever gets for us behind camera – two people completely in their prime. The last time Phoebe was photographed in a public place she was clutching three Emmys. And Harry, he’s getting bigger and bigger and is such a joyous presence to be around. Those two massive stars together, learning a dance routine, doing something they’d not done before, it felt like we were witnessing something really special and it just makes you want to shoot the best video you possibly can.”

How did you end up doing two videos for the record?

GT: “We see Harry outside of work, so we talk about things all the time in a slightly different way. The TPWK conversation came from meeting Phoebe and saying, ‘Wouldn’t it be great if you two danced together?’ Then after we did that, when Golden came up, there was a feeling that we could do something together in a similar vein.”

BT: “Golden came about as organically as TPWK. We all sit around mooching with our mates saying, ‘Wouldn’t it be great if this or that…’ When you’re mooching with your mates and it’s Harry or Phoebe, those ideas can become. And that’s how these videos really came about. Golden feels like a driving song. The initial idea was Harry driving around LA with different people getting in and out of the car, people who were significant to the album or his life. That came off the table with Covid, but it was the idea we fell in love with. The world changed and he couldn’t tour, so they wanted to make more videos. We couldn’t make that original version, but the thing of movement came out of it. When someone you feel close to does something you rate as highly as I rate Fine Line you feel lucky. When you’re listening to that kind of music you get ideas. We’ve been in the position where you’re racking your brains for the right idea, and that can also lead to brilliant work, but this album in particular, I’d listen to it, walk along and think about it, before pitching anything.”

Harry’s vision for the album was so strong, what was that like to work with?

GT: “You just don’t want to drop the ball for him. It’s so important and the album’s so good, plus we’re fans of his as well as contemporaries. When he drafts you in to work on a video, you’re like, ‘OK, I just want to make sure you’re happy with it, if you are then it’s job done’.

BT: “There’s just so much there to work with. There’s so much in there. Why does TPWK work? What’s it really got to do with anything? Except somehow it does. There’s so much in that song and the feel of it that a slightly weird, leftfield idea makes perfect sense. I think that’s to do with how deep his creative thought and well of feeling [are], that allows it to go off. Not just our videos, but the ones everyone else made for the album, they’re widely varied but they work together. That’s got to be down to him, he’s the common thread. His creative team, too. They’re great sounding boards to work with, a guiding hand. It sounds like this massive love-in, but it really has been a very enjoyable, rewarding process.”

GT: “Harry doesn’t go off set. He does his bits and then when other stuff is going on he’s sitting next to you watching the monitor. He’s very, very involved in everything and he’ll push himself. At the end of TPWK he wanted to do a couple more takes at the end to make sure they’d nailed it. We said, ‘We think you’ve got it’, but he just said, ‘Let me go again a couple of times, I want to make sure it’s done to the best of my ability’. He works really hard, he’s great to collaborate with and he doesn’t let up. If it’s not good enough, he’ll carry on going.”

There’s so much in Treat People With Kindness that a slightly weird, leftfield idea made perfect sense

BT: “You’ve got a sense that it’s his video and he wants it to be the best. He takes ownership. He knows it’s his video and that how good and engaged he is will affect how good the product is. The length of the relationship we’ve had with him allows a kind of shorthand and a way of working to maximise that.”

GT: “He works to a really high standard but he’s unbelievably kind to literally everyone, all the time. Even if he’s under pressure, he never drops his standards of the right way to behave and being kind to people. It’s so impressive to work with someone like that. He’s never not a good bloke about whatever it is that he faces. You watch the way he is with the runners, producers, sound people, whoever… He’s treating them with so much love and respect that everyone works as hard as they possibly can to make his vision come true because he’s so joyful to be around. It does sound like a love-in, but that’s the most defining factor – he’s so talented and so nice about it.”

What do these videos say about where you are at right now as directors?

GT: “Our thinking is always about how we can be creative. We don’t really think about the space we’re going into as much as what the idea is. If you only do one thing it sometimes stilts your creativity because you get into a pattern, whereas if you’re constantly jumping between mediums it keeps you fresh. We like to be involved in lots of stuff. We try and surround ourselves with people like Harry, who operate in that way. Ben and I just try and push each other into trying to do the best we can. We feel massively lucky we get to work together, we’re brothers, best friends, it’s a dream.”