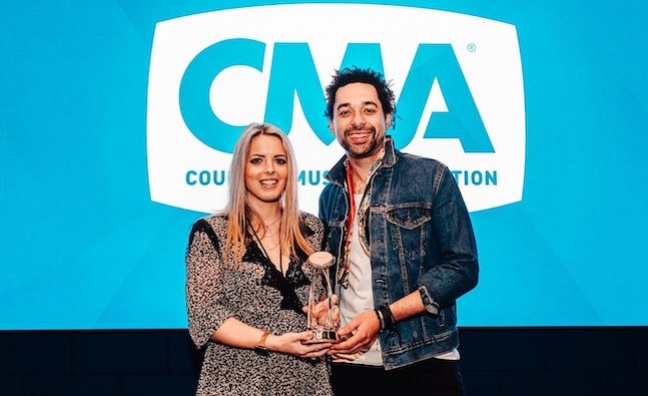 The Shires are chasing a fourth consecutive Top 5 studio album this week. 10 Year Plan, the country duo’s second album for BMG, was at No.5 in the Midweeks.

The Shires launched the album with a Country To Country appearance at The O2’s Indigo venue at the weekend ahead of a UK tour next month.

The duo also won the Country Music Association’s Jeff Walker Global Country Artist Award, as they look to tap into the growing international appeal of the genre.

“I think there’s huge potential,” said Gemma Reilly-Hammond, BMG label co-head and vice president of marketing. “They're such a hard-working band, and they've got a really loyal fanbase. We’re really excited about The Shires.”

The Shires have teamed with BMG’s country label, Broken Bow Records, in the US.

“The good thing about country is the streaming potential, particularly if you can switch on the US aspect of it - it's massive,” said Reilly-Hammond. “We have Broken Bow, who are part of BMG out of Nashville, and the streaming levels of the artists that they look after are phenomenal, even when you put it in a global context, massive. So there's huge potential, and not just from live and physical [music] - if you get it right, you can unlock a wealth of streaming potential as well.”

You can unlock a wealth of streaming potential for country

“Those two acts are both seen as credible [in country],” added Reilly-Hammond.

Twinnie was signed a couple of years ago, but had to navigate a debut album campaign at the start of the pandemic.

“She's since done a sold-out tour - there was just a bit of a gap between the debut album and the tour coming,” said Reilly-Hammond. “The streaming for her has been great, and the support from the editorial country teams, particularly in the US, has been very strong.

“So we're very excited to be working with our US colleagues on both Twinnie and The Shires. We've got a really good collaboration going there, we're really lucky to have that kind of expertise as a partner from Broken Bow.”