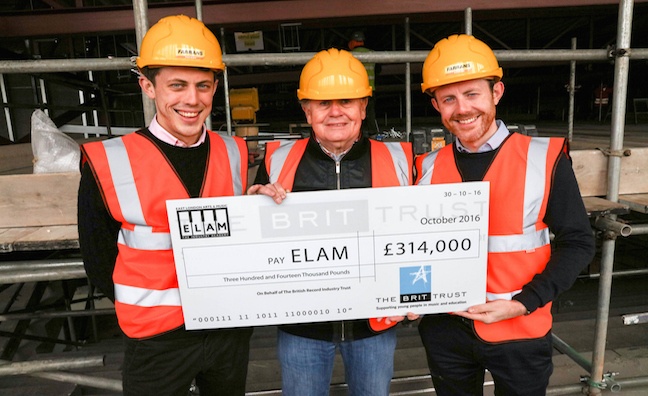 The BPI’s charitable arm – the BRIT Trust - has announced a donation of £314,000 to East London Arts and Music (ELAM).

The funds will be used to build a new theatre within ELAM’s campus facility in Bromley-by-Bow, East London, which is due to open in March 2017.

ELAM is an industry academy that is free to 16-19 year olds interested in pursuing a career in music, film and TV production, games design or music and media promotion. It was jointly founded in 2013 by Will Kennard – also known as one half of English electronic production duo Chase & Status – and his brother Charlie Kennard, who is the school’s Principal.

ELAM has received widespread backing from the UK music industry, ranging from artists, managers and producers to music associations such as the BPI and record labels, including Universal Music UK, which offers a masterclass, mentoring and trainee programme.

John Craig OBE, BRIT Trust chairman, said: “It’s vital that music and the creative arts are allowed to contribute to our children’s wellbeing and education – not only to support the continuing success of British music, but because it will also benefit society as a whole.  We need much more music education, not less, which is why the BRIT Trust has been such a keen supporter of the BRIT School over the years, and why we now also want to encourage the fantastic work of ELAM. We’re proud to make this donation to fund the Academy’s new theatre, and hope that it will help inspire a new generation of talent.”

Kennard added: “We’re so excited by ELAM’s imminent move to the new campus in Bromley-by-Bow, and by the prospect of this new theatre that will act as a flagship to the state-of-the-art facilities we are planning for the site. We are hugely grateful to The BRIT Trust, and to the record labels and the music community that support its work, for this generous funding that will open up a world of possibilities for our students and help them to flourish.”

Geoff Taylor, BPI & BRIT Awards Chief Executive and ELAM governor, commented: “The BPI has been an enthusiastic supporter of ELAM from the very beginning.  We believe that creativity is one of the country’s vital assets and that we should help young people of all backgrounds who have a passion for music and creativity to find their way to a fulfilling career. ELAM and other creative schools like The BRIT School have a critical role to play in inspiring and nurturing this talent.  So I am delighted that The BRIT Trust is underlining our industry’s commitment to music education by making this major investment in the Academy and in the future of its students.”